You might’ve seen me at the space drinking a milkshake-like liquid for dinner. For the past two months I’ve been living off various powdered food substitutes. The best-known one right now is Soylent (and no it’s not made of people, but you can totally make it green with food colouring). Soylent isn’t officially available in Australia but there’s ways around that, however it’s very expensive so I’ve been mostly eating 100%FOOD. I’m not an expert but I thought I’d host an informal discussion about what I’ve learned so far, the good & bad parts about living off liquid meal replacements & other related stuff. If this interests you, come listen to me at 6:30pm-ish Tuesday 16th of September!

To make things a little bit interactive, I’ll be offering a taste sampler! For $5 you’ll get to try a sample of official Soylent, 100%FOOD Organic and 100%FOOD Chocolate. If you like it, you’re welcome to buy some 100%FOOD off me for $8 a bottle. I’m really not expecting to make a profit on this but if I do, all proceeds will go to HSBNE. However if someone wants to buy a lot of it off me, then I’ll do a large order next time at lower prices.

It’s easier for me to answer anything like that on the day than have the entire discussion online here, but the short version is that that experiment certainly proves that bioavailability of food is important for measuring nutrition levels & the form of the food changes its bioavailability. Any decent powdered food substitute will have taken this into account. However at the end of the day I’m not eating solely powdered food, perhaps one meal every other day is regular food because of social reasons. Also, from personal preference I tend to mix up my drink to a thicker-than-usual consistency, similar to that of thick porridge, so that I have to half-chew it. Also also, I’ve started using chewing gum just to exercise my jaw otherwise I get chewing cravings.

I’d like to thank everyone who showed up to this talk, especially those who bought or tried some Soylent or those who tipped me! We had around 20 people by the end. It’s hard to gauge how these things go when I’m standing up the front presenting them, but it seemed to be a success.

For those who missed out and wanted to see it feel free to come talk to me and I’ll answer any questions (or check out my slides here, left/right arrow keys to navigate). I’ll have a couple chocolate & original 100%FOOD bottles with me for the next few weeks in case anyone wants some, $8 a bottle which is one meal. 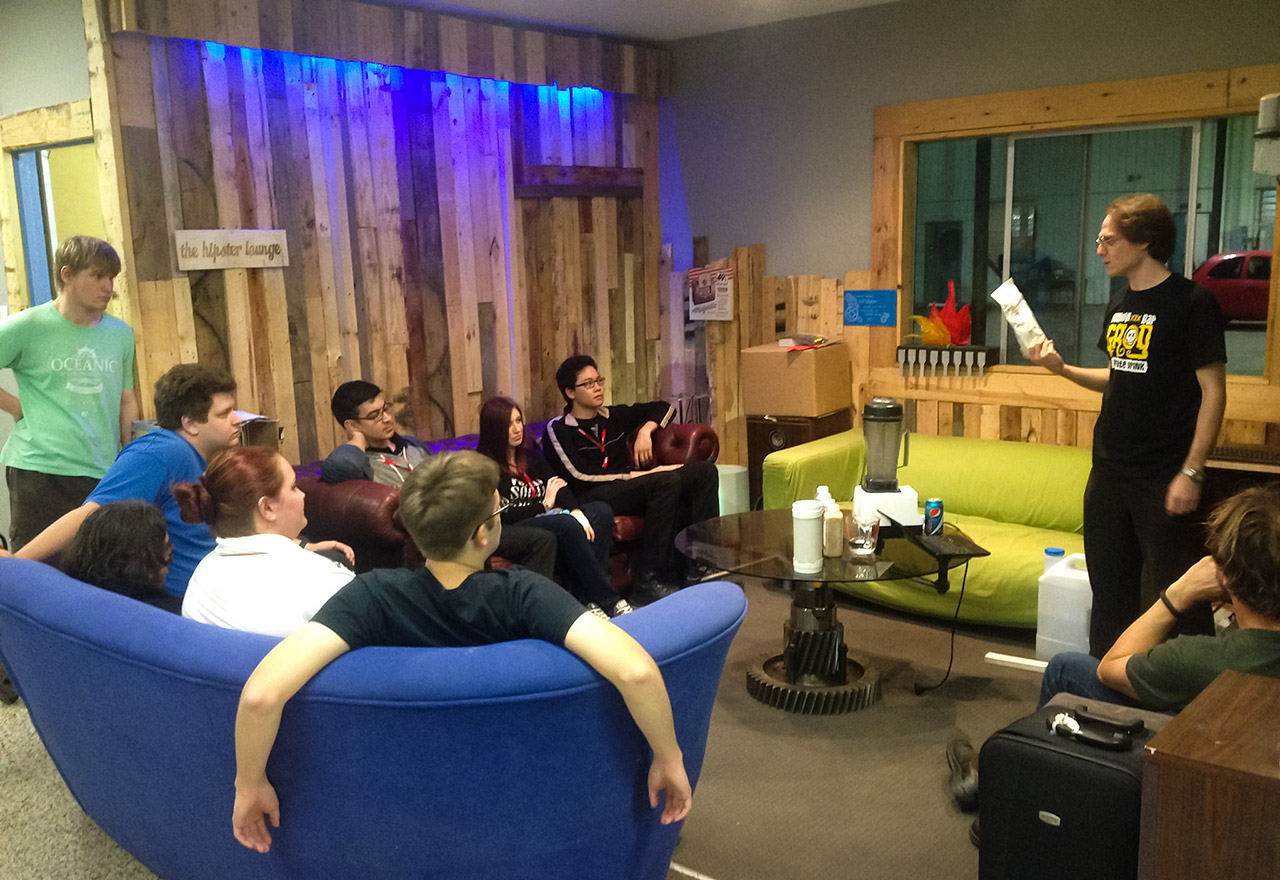 /me emerges from a shrub

I made some DIY soylent using this recipe: diy.soylent.me/recipes/australian-soylent-10-8-powdered-ingredients-2-pills

I lived on it 100% for three days, and then had a two week break, then lived on it 55% for two weeks. I did not die. Never felt hungry. Regular food was awesomely tasty.

/me disappears into a shrub again