Some time around Jan/Feb this year I needed to use an angle grinder. I couldn’t find any that were safe to use so I went and bought one. I then let the metalshop/membership know (on discord I think). Disappointingly, nothing was done to rectify the safety issues I identified.

Recently a member injured themselves while using an angle grinder in the metalshop and required an ambulance call out. This accident was in part caused by human error and because the angle grinder had no guard or handle installed.

It is completely unacceptable to allow such dangerous tools be available for members to use without basic safety precautions like the guard and handle being in place. Therefore, I’ve removed all angle grinders that didn’t have a guard and handle installed and locked them in the server room. Given this issue was identified ~6 months ago, and we’ve recently had a significant injury, I feel this is a reasonable action. I had a brief look around where they’re stored and couldn’t see the missing guards/handles anywhere obvious.

The large angle grinder had a guard and handle installed so that was left where it was. There was one other angle grinder I left out. It had a handle and no guard, but had a brush attached to it. This grinder (or any I missed) is not to be used with a grinding or cutting disc under any circumstances until a guard is put back on it.

The three angle grinders I removed were placed in a box and taped up, then stored in the server room. These are not to be removed from the server room for any reason other than to put the guards and handles back on.

If you don’t have access to the server room and would like to make the angle grinders safe again, let me know and I can organise a time. I took a picture of the offending angle grinders below. 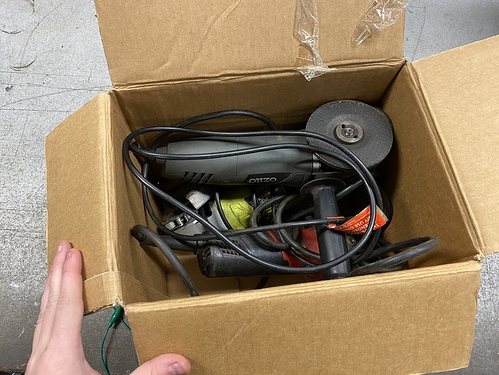 p.s. the ozito one was donated by myself a while ago and had a guard when it was donated. Someone has removed it and put it god knows where…

I think a big issue with the grinders is that people will take the guards off to use a flap wheel or wire wheel and don’t bother to put them back on afterwards. This particular issue could be mitigated by allocating grinders for a specific use. (ie. 1 for grinding, 1 for brushing, 1 flap disk). Maybe get them in different sizes so the grinding wheels aren’t compatible with the grinder used for brushing.

members of the HSBNE in general just seem to do what they wont if it suits them to achieve there objective, ignoring the rules and regulations set in place. To my understanding, these rules are to create a safe and fair working space for all members. i am also aware that the space is a work in progress, learning and growing all the time.
i would like to bring your attention to the metal shop policies. section 4. see below.
Section 4 : Metal Shop Changes:

Any changes to the metal shop must be approved be the cause leader. This is to prevent any doubling up of purchases and plans for the metal shop that may be in place.

I have made these policies available on wiki and also posted in the metal shop for all to see. I suggest every one read them.
Jaimyn, you said you think you posted the donation of the ozito angle grinder. i do not recall seeing it and i was not informed directly. if i had been approached for a donation of a ozito angle grinder i would have suggested that you keep it your members box for when you needed it.
my advisers or my self where not informed of the angle grinder accident and still don’t no the details around it.
Jaimyn you have acted failing to follow the rules. my advisers and my self where not contacted before you removed the angle grinders. you have made changes to the metal shop. in the future could you please consult me before making any changes to the metal shop.
The investigation into the accident and appropriate changes are being made at the moment.

my advisers or my self where not informed of the angle grinder accident and still don’t no the details around it.

Just to clarify this Craig, you and I talked about this on discord private message on the 22nd June. Just to jog your memory there.

Craig, (@reatek) I know your going through some stuff but I don’t appreciate your tone. Everything I do for the space is for it’s benefit. In fact I spent half a day on site today fixing things and making improvements. Implying that removing the grinders was done because it suits me and my objectives is inconsiderate (I don’t know what objective that would help me achieve fwiw).

Your cause rules are superseded by any official policy such as the safety policy which states “Everyone is encouraged to question safety openly, without animosity or fear of reprisal.” and “Always consider the safety of yourself and others.”. I questioned the safety of these angle grinders months before COVID restrictions hit and nothing was done. In considering the safety of our members after this accident, I removed these tools because they are unsafe to use. Your metal shop cause policy has nothing to do with this.

I didn’t say I think I posted about my donation of the ozito grinder, I said I did post about my safety concerns due to the lack of guards. The ozito grinder was donated well before you were metal shop cause leader and the angle grinder that I mentioned I purchased (because there none on site safe to use) was a battery powered Ryobi one that I keep in my members storage.

Jaimyn you have acted failing to follow the rules. my advisers and my self where not contacted before you removed the angle grinders. you have made changes to the metal shop.

To be absolutely clear, this is not the case. I do not need to contact you prior to removing clearly unsafe tools from a general workspace (half a year after I reported these safety concerns mind you).

yes, I’ m aware that you messaged me informing me that the execs where in the process of a safety assessment and remediation as part of zacs injury.

yep, so you were informed. just to clarify also, @jabelone’s actions are not part of an executive directed response.

you have interpreted that i was implying it to you directly. how can you determine tone via text. it was a generalized statement to the using of the tools (grinders). i don’t recall you speaking to me before the covid thing about the safety of the grinders.