I live in a house that has the occasional indoor dampness & mould problem after heavy rain, so years ago I purchased a sizeable dehumidifier. The way it works is similar to a standard air-conditioner except the hot and cold sides are right next to each other, to make it far more efficient and much better at condensing moisture out of the air.

There’s one downside to my dehumidifier though - its dust filter is best described as a hair filter, because it’s just a grid of plastic that will do nothing to purify the air that passes through it. So I thought I could improve this by turning it into a proper air filter too. It’s also a bit noisier than I’d like, so finding a way to quieten it a little would be amazing.

What’s more, if you’ve ever looked up the prices of dedicated air filters to remove dust/pollen/allergens/smoke/smells, they’re crazy expensive for what they are. Box fans are cheap, filter material is cheap, but somehow if you add the two together into a dedicated appliance you end up spending nearly a thousand dollars to get an acceptable-micron-filtration one. That’s just bonkers to me! I really thought there would be cheap Chinese knockoffs to filter the poor air in China, but I couldn’t find any that had the specs to actually work properly, only dodgy ones that wouldn’t filter everything. So, it’s time to get hacking!

In my research of filtration materials, I found that the cheapest source of stuff (including shipping) that will go down to a fine enough micron is the filter refill packs sold for furnaces in America. Comparing the market with tech specs galore, the final material I decided upon was 3M’s Filtrete MPR1200. This isn’t the highest level particulate filter around but it’s efficiency in the 0.3-1.0 micron range is 85% (meaning most bacteria will be caught let alone smoke etc), its pressure drop at the standard weave packing is only 0.24 (meaning it won’t overwork the motor on my dehumidifier), it has a metal mesh built in so it will retain its shape without sagging when left vertical, and most importantly it has the highest activated carbon content of any filter on the market (meaning it will remove smells that are entirely gaseous in their nature). And check out that price for a 4-pack of big sheets of the stuff - it’s also pretty darned cheap for what it is, and a 4-pack will do me for many years with regular changes.

(Inside the dehumidifier showing the compressor at the bottom and the evaporator (cold side) mounted right in front of the condenser (hot side), with the filter material on the left. Mmm, carbon goodness.)

Swapping the filter material was as easy as removing the old plastic grill “filter”, cutting the filter material to size, and affixing it in place. For temporary testing I’m using some silver ducting tape I had left over, for one reason because I prefer its sticky properties over normal duct tape but also because it looks slightly less hobo-ish than the usual grey stuff everyone uses. I’ll 3D print a proper mount for it later. If you’re using the same filter material I am, pay attention to the mounting direction for airflow - the air needs to be filtered via the white side first, then hit the black carbon-filled side second! The filter material I used was also compressed a little more than it came so it had more pleats, to reduce the pressure drop even more. 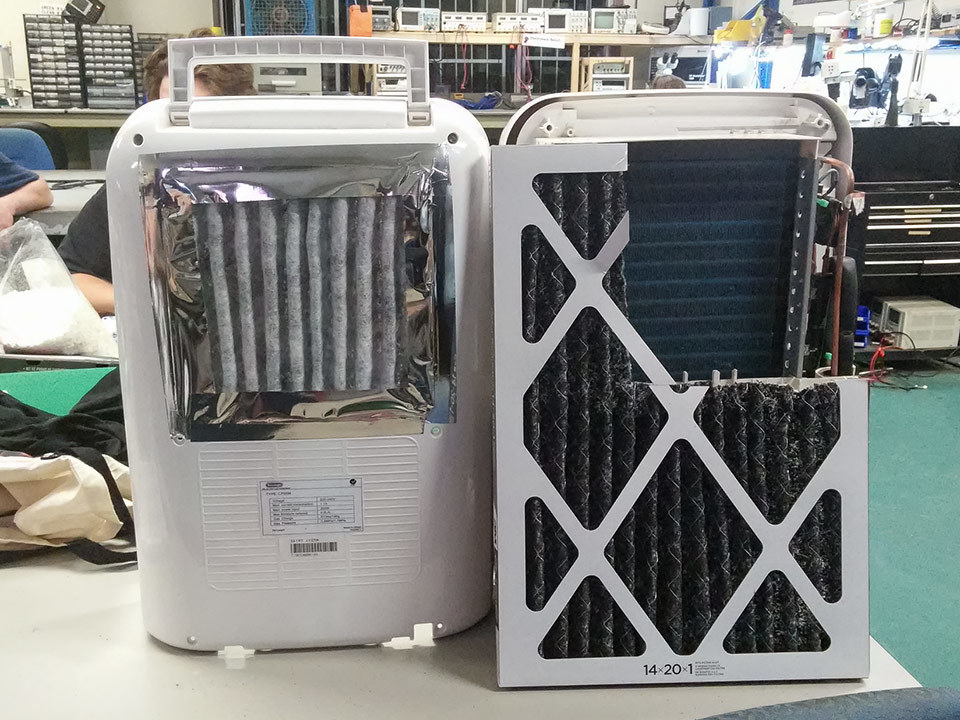 Now for the next step - quietening the machine! 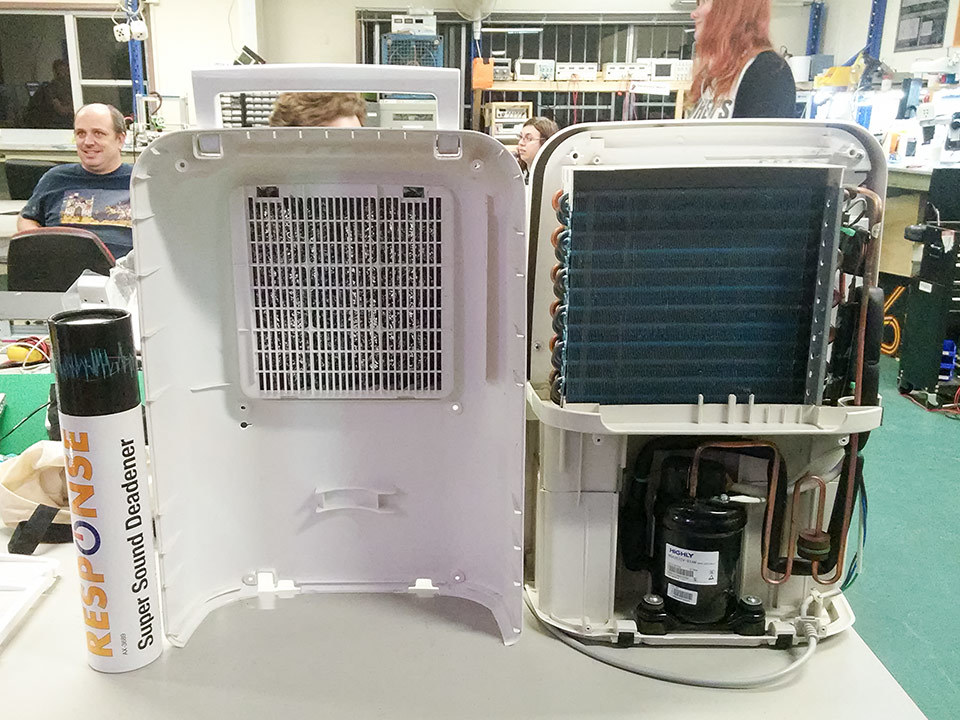 Testing with my ears confirmed that this unit is slightly quieter with the case off than on, which sounds a little weird and unexpected, if you’ll pardon the pun. Testing with my hand showed quite clearly the cause of a lot of the device’s noise was the large back plastic case picking up vibrations from the compressor and reverberating like a subwoofer. The easiest way to fix vibrations transmitted like this is to add some mass to the panels, preferably slightly decoupled from the final plastic layer. But why not go all out with some sound absorbing foam too! I had some leftover butyl/foam sound deadening material from another project, so I applied it to the interior of the case.

With that all done, it was time to put the screws back in, test it and… holy heck it’s now much quieter! Still audible, but nowhere near as annoying. I tested the filter’s effectiveness by lighting some incense in a small sealed room, stinking the whole room up, then turning on the dehumidifer. The incense smell was undetectable after fifteen minutes, so I know that works well too!

I now have a many-hundreds-of-dollars-equivalent air filter as well as a dehumidifier. Woot! 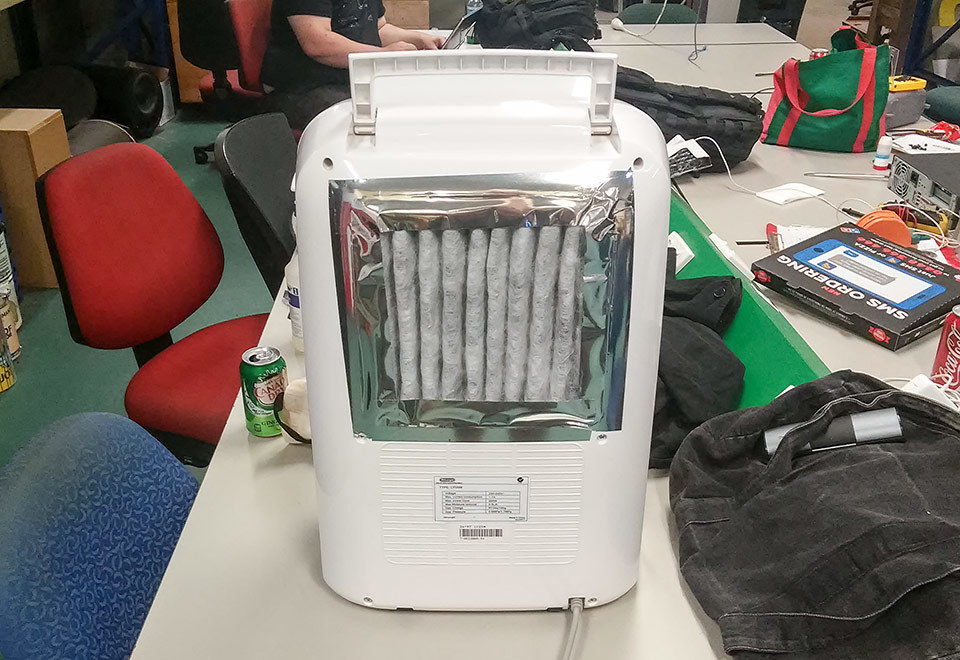 (Finished machine from the rear - a little hacky looking, but now that I know it works I can 3D print a proper holder for it)

My verdict: totally worth the money and the time!

Finally, if you’ve made it this far, for your reward here is a picture of a cat stealing my spot in my computer chair. 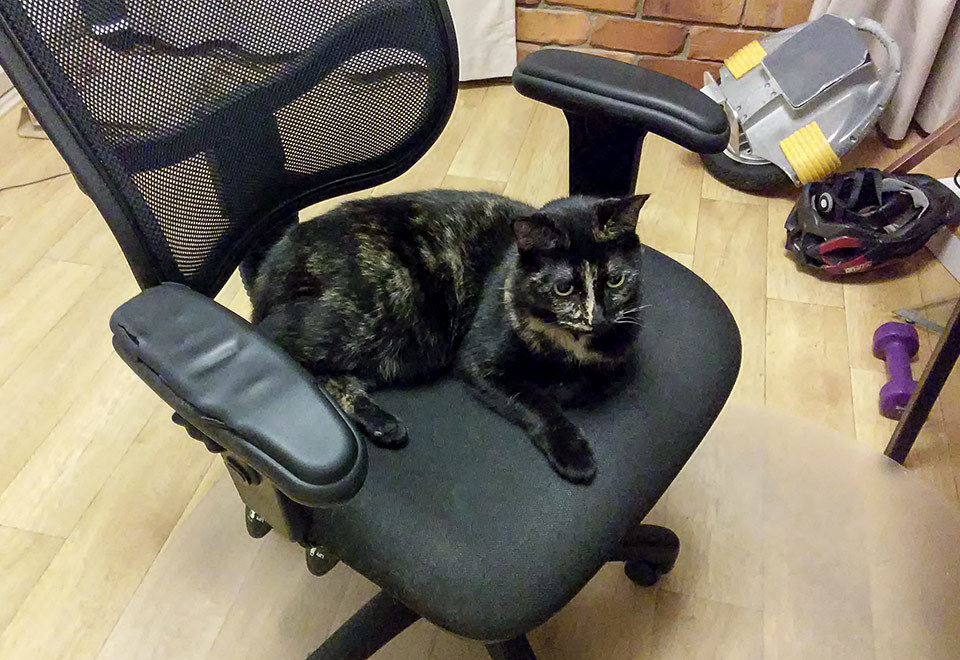 BONUS ROUND! You might have noticed that I had a lot of filter material left over. Well @pikkaachu was at the space when I did this and he mentioned wanting to upgrade his car’s air filter to something equivalent to a “Bioweapon Defence System”. Well I had some spare filter material & cutting tools sitting out, and his car’s current filter is also just a horizontal plastic mesh to stop leaves & seed pods, plus it’s super accessible, so… Maybe half an hour of work later, and the job was done! 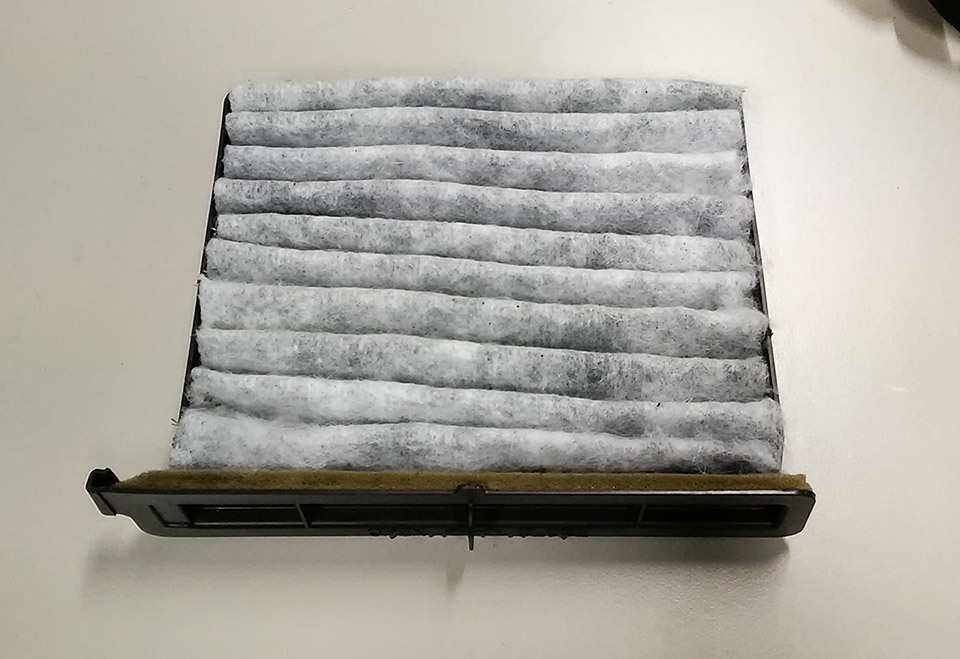 But did that actually work in a car environment too? According to @pikkaachu, when he drove home from the space that night he was stopped by roadworks laying a new road. He didn’t even think about the lack of a smell until his car was hit with a plume of visible diesel fumes, and he couldn’t smell a thing. Winding down his window he said he was hit with an overpowering wall of diesel fumes, freshly hot bitumen and dust all creating a horrific smell. Closing the window and putting the fan on maximum speed on recirculate, he said the smell within the car quickly dissipated within seconds. So that’s definitely a win!

Verdict: if your car happens to have a removable horizontal grill filter with plenty of vertical clearance, this was super easy and made a huge difference.

I happen to have a removable horizontal grill filter, but I rather suspect you also need a roof and doors on your car to notice any effect at all…

Being slightly more serious though, I may have an application for smoke.

Nice. I have a couple of those Delonghi.

How much was the shipping on the furnace filter to OZ?

I will def do the noise damping on mine when I feel up to it.

How much was the shipping on the furnace filter to OZ?

When I ordered I got a 4-pack of the size I wanted for $52.75AUD, while shipping was $45.70AUD - which is a tad pricey until you realise just how large the box is. It arrived in just 4 days too. But as always, check around for the best prices before you buy and watch Amazon for a few days because the prices are constantly fluctuating up and down day to day.