Do we have a way of measuring rotational speed?

Silly question, do we have a device that can measure rotational speed? In the order of about 20-50 RPM.

Reason I ask… I’ve got a Kenwood P-110 record player that I was given some time back, and from day one I was suspicious that it was playing “fast”.

Tonight I did some measurements with a recording of a song off an LP, and comparing that to a version of the same song sourced off a CD. That showed the record player to be running about 4.52% too fast, what should have been 33⅓ RPM was in fact more like 34⅘ RPM.

Now, for the present I can just adjust the speed in Audacity to slow it down a tad. No issue there, I can possibly grab some of the albums I’ve done with this turntable and still have as uncompressed RIFF WAVE format; if I recorded those at 48kHz then I just need to change the sample rate in the header to 45.923kHz, job done. Vorbis might be more tricky as I’m not sure if it’s possible to change the sample rate in the metadata. I know FLAC can, but then hex-editing a FLAC file is a royal pain in the arse. Re-encoding may be easier.

In any case, I’d like to try and fix the root problem. I’ve found the service manual for this beast, there’s two pots accessible from the base of the unit. I just need a way of determining when I’ve got the speed right.

Maybe a timing light type set up? Some tape on then turntable and a strobe?

Yep, the better quality ones have that… usually timed to mains. Given it’s a trim pot though, it doesn’t need to be permanent.

I was thinking of a reflector that I could bounce a beam off and time the reflections coming back. Make sure I get a pulse once every 1.8 seconds (once every 1.33 for 45RPM). If we’ve got a device in the space that can do that, then it probably is easier for me to bring the turntable in and we do that once-off adjustment.

Otherwise, I can improvise something.

Pull an opto endstop of one of the 3D printers. Blutak a peice of card to the turn table and blutak down the opto so they interact as they normally should.

Hook output up to the counter on the desk or the scope.

I’ve got a cheap ebay laser tacho thing here but ti would be a hike for you to come grab it I guess.

Attach something to the platter that makes a click every rotation.
Second the clicks in Audacity.
Measure the time between 10 clicks.

Some of my records come with that feature built-in… radial scratches.

Have you considered something as low tech as a mechanical stroboscope. I
remember it being quite accurate in physics class a long time ago.
Batteries wont go flat…a spinning plate with slots…

Have you considered something as low tech as a mechanical stroboscope

To go even lower tech

have you considered slow mo video on a phone? Most newer phones will do 120fps which should be more than enough if it’s around 20-50 rpm. The feedback will be quite slow if you want to do “real time” adjustments but it worked well for a ~30rpm motor I had no idea how fast was spinning.

All you do is put a sticky note or something that makes it easy to see when it does a full rotation. Take for example 10 seconds of footage, slow down the footage and count up the total revolutions then average it over 10 seconds.

That might be the answer actually… since while the stroboscope idea works, it unfortunately requires that you have some reflectors at calibrated positions on the platter.

My father’s Rotel has that feature, but it’s entry-level studio equipment (with a stylus that hasn’t been replaced in my lifetime). This turntable being a budget model, doesn’t.

I’m just cursing Kenwood for putting the controls on the bottom of the case. Clearly they didn’t think that it might be possible for them to get the tuning wrong and that a user might need to adjust it whilst taking measurements.

Okay, so I think the camera method works, although it’s a little clunky. Removing the rubber mat that the record sits on to reveal the platter itself, I used a paint pen to make a very obvious and clear mark.

I did similar on the case, using a CD marker pen to make a mark on the case. 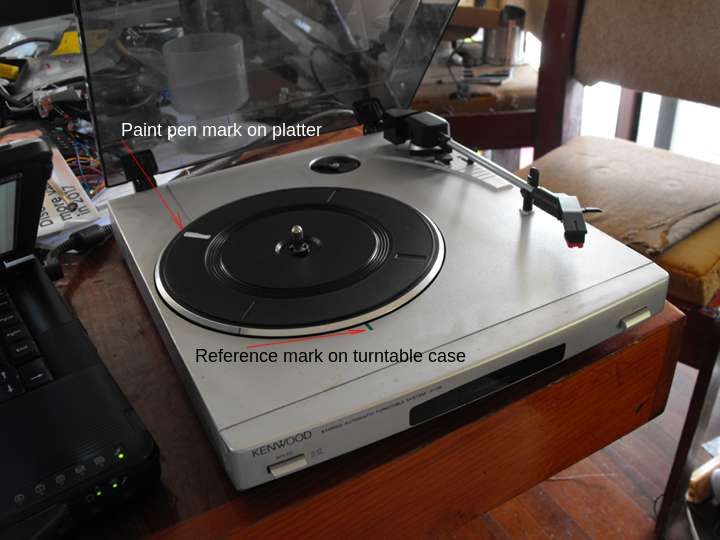 The camera I’m using records at 30 FPS… so I take a movie of it spinning, then shut the camera down, pull the SD card out, pull the file off, and run the following:

That gives me the individual JPEGs out of the MJPEG stream the camera produced, with the frame number in the file name. Then, it’s a case of pick out two frames showing the markers lined up.

It’s then a matter of tweaking the pot… which is a rather odd device… there seems to be some sort of rubber cover across it, and it’s nearly impossible to know if the screwdriver is engaged with it… it must be though, because after doing a recording of a track off LP that I also have on CD (in this case, David Bowie’s Starman) and comparing the lengths, I’m now about 3% slow: 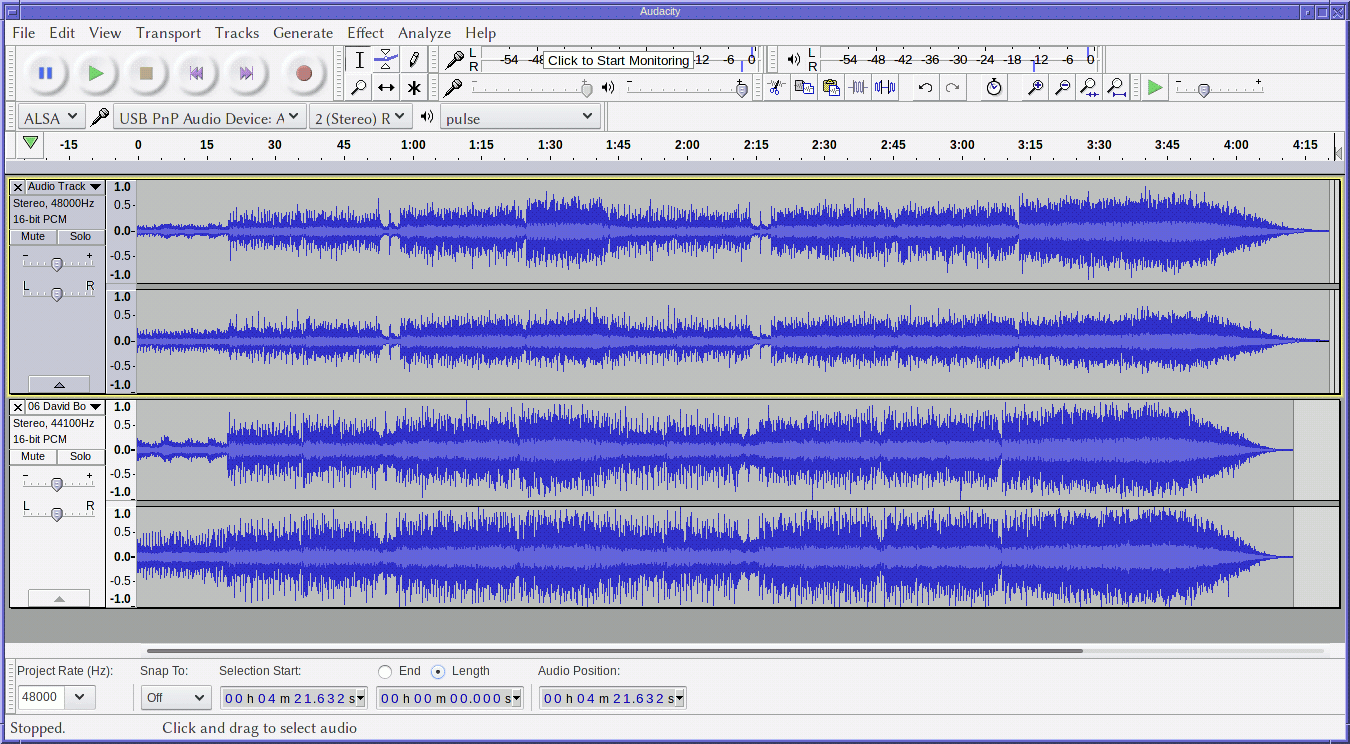 But I am closer

closer is good, let me know if you want me to film some on my phone. It goes up to 240fps I think so it can get very granular

Yeah, as I say the biggest pain point is the adjustment on the bottom of the unit. The service manual suggests it’s all built into the motor module.

I’m actually tempted to de-solder and relocate the trim-pots to somewhere where they can be accessed with the unit upright. I suspect this is easier said than done.

The other option is to go full furiosa on it and put a little AVR microcontroller in charge of the speed. I’ve got some ATTiny24As kicking around that could do this. Give it a nice 16MHz crystal and use PWM to drive the motor. That might be an option for the one I ripped apart for its USB audio interface.

Google “turntable speed strobe disk”. Print. Turn on light. Ooh, turns out there are apps to do it too.

oh my…that is almost too easy!!
Well done Ashley!
Here is a video of someone using a printed one…


I think that will be your best bet Stuart because you just keep starting and stopping it to adjust it without having to rig stuff up again and record and so on.

Yep, there are apps that do this… most of them only available on Google Play… which my phone does not have access to. I’m basically stuck with what I can get off fdroid.org or compile myself.

I have considered whether I write something that tracks the mark I’ve painted on the platter and computes the rotational period as it passes the camera.

As I say though, the stroboscopic disc isn’t without its merits. Keeping the traction on the paper is a minor technical challenge, I might be able to use the 45RPM record adapter for that.

I can either tweak a 555 timer to blink a LED at 50Hz… or fire a strong steady light down and use an LDR to detect the reflection off the page and monitor that on the oscilloscope.