We’ve done some inspection and we have some suspicions.

If you look at the asphalt at the front of the building its essentially a bathtub. Then theres lino on the floor of the storage room which can pull water in via capillary action. So thats probably the main ingress. Around the other walls theres a big concrete lip so I’m reasonably confident this is the ingress point.

So, how to solve?

Well, the room is going away, so will the lino. I dont think a lip on the doors is a good idea, trip hazard etc.

Theres a drain 6m to the right, and another 1m to the left of the door. I think we should rent a concrete saw to cut a 30cm approx trench out the front of the building between these two drains, and build a grate over the top. (Theres some wire catinerary (sp?) that looks ok, but we could just do it with SHS and some mesh or whatever.)

This would need landlord approval but I believe its the most expedient solution to solving the flooding issue. Any smaller works, like small cuts in the asphalt etc I think will just be overwhelmed by the water volume.

Hopefully doing this will also negate that little ‘bathtub’ in the asphalt there as well.

Renting that saw will be about $50/day, and we have a jackhammer thing to break up the material. With 5 people we could turn around the whole thing in a day.

I still think we should grab the footage of the camera during a rainstorm and see where it exactly comes from. Currently all we do is wild guesses…
That is short of somebody sitting in the shop during a storm and figuring it out in person…
Then we can make a solid plan how to keep the floods at bay once and for all.

Josh, I hate to say it , but the rains coming down hard like it does here, so there aint no little drainpipe that’s going to be able to take the water away without the water level rising above the groundlevel somewhat during the process. I think here it needs to be “above ground level” for the water to get to the drain and exits.

So, I think a “lip” across the entrance door is really the only approach that’s likely to work properly. It’s considered perfectly acceptable to do at doorways, prettymuch all aluminium doors on your typical house have a “rail” across the ground that the door slides on, it’s also there to keep the rain from getting under.
eg:
http://www.trubluwindows.com.au/graph/services/aluminum-doors/multi_track/full/img4.jpg

. Part of the issue is that there is a bathtub around the doors, and that the drains are not at ground level around those things. This will solve both issues.

The floor is already raised, by about an inch. Its a drainage issue.

It’s hard to explain in text, I can show you exactly on tuesday if you like.

(I’m not against a small lip, I just think its pointless and wont help)

Either a lip, trench to that drain, or install another drain out to the street side of the slab (closest place to dump water).

We could put a pump in, but that’s not ideal given there’s no big holding tank for it so it’d be cycling on and off like mad unless it was inundated. Also, there’s the issue of where the water goes, unless it’s inline with a current drain pipe you still need an extra place to dump water.

I had a chat with a few people last night and we talked about it in the cause meeting.

@boo stated that he saw that the drain gets overwhelmed and starts backing up and filling the area up with water. I’ve also had statements from other people about the downpipe drain backing up also. Essentially the whole area just doesnt have adequate drainage and no trenches etc will help.

WRT a lip, theres so much water that any lip would have to be 10-15cm at least, which would necessitate a ramp. I’m not sure that that would be workable.

Uhhh so yeah, we’re a bit stuck. Theres some mitigation strategies like sandbagging the fence line to reduce the water ingress from the carpark, but short of revamping the drainage (huge undertaking) I think its just going to be life… 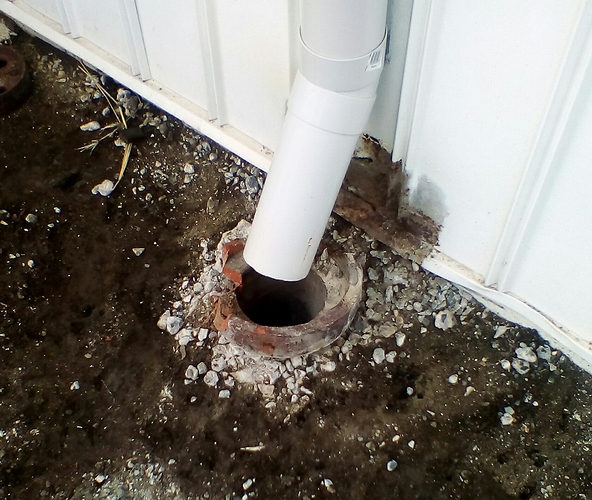 It feels like it goes into some old steel square(?) pipe maybe 100mm. Dunno where it goes or what kind of capacity it has spare but its a possibility.