One of the bigger projects that has been in the works is the new Tour and General Induction, for several reasons:

There has been a ton of effort as several elements have needed to be pulled together to make it happen. I can’t go any further without acknowledging @jaimyn for his work on the portal, @GeoffC for his work on the card printer, @Antifoo for shooting and editing the videos, and @devians for his help and experience with creating Canvas courses, helping to write video scripts, and stepping in to shoot when I was knackered. I’ve been working on a script for tours, so anyone who wants to help by running one knows how to describe each area, and can name bits of equipment (Something I’m still working on). Tour guides aren’t expected to know everything about every machine, so I’ve left that open as much as I can, the wiki and discord are the go-to for any curly questions.

So, why the Forum post if so much has been done? Because now it needs testing! With real humans! And feedback is a good thing! And if all feedback is here in this post, you can see if I’ve already been told about a stuff-up, so I’ll be going through replies to this post to fix anything you find wrong- typos, bad questions, wrong answers.

Just to give some context, the current joining flow is:

This is the proposed new flow, as I understand it: 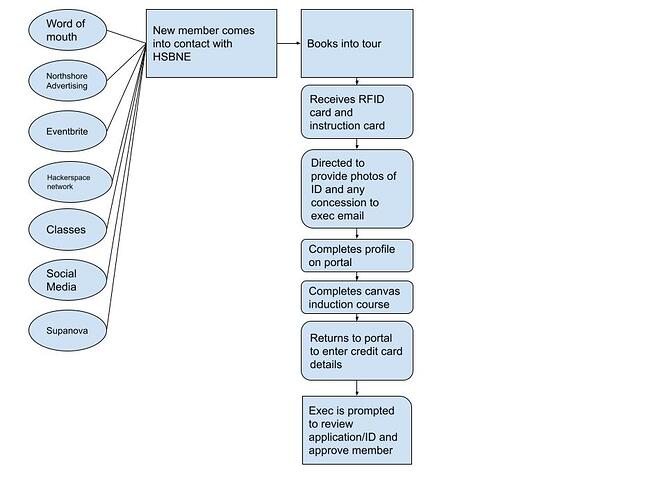 For the tour guides, here’s what I’ve put together for them: Tour script for new onboarding flow - Google Docs

You will need a Canvas account to look at this, but it is worth the effort as quite a few HSBNE courses are already on Canvas, and there are plans for more!

Here’s the canvas link to the online course: https://canvas.instructure.com/courses/2406446

Another aspect of this new flow is the move to Stripe billing, to reduce the load on the Treasurer and make it easier for members to stay up to date with their membership fees. I’m excited to see this all coming together to help HSBNE grow, and take away some of the drudge work of running the space, and getting to make Something Awesome!

Looking forward to feedback and comments!

For the induction process, (wearing my day job hat) we should keep all communication through the hsbne website/portal and any data on hsbne controlled servers (local or AWS etc)

My concern is sending ID of any kind through email. (I’ve had a third party background check company ask a potential new hire for their passport, driver id etc to be sent to their general helpdesk email.)

A secure interface to upload these documents, mark them as viewed/approved, and respond to the poster would be ideal. We should indicate how long we keep their id on file.

Ill write up a better response when i have time, but at no point have we considered transmitting documents in the new flow via email. the flowchart above is quite inaccurate. so just rest assured we are peremptively aware of your concern.

The current proposal is to use a third party KYC service (I’m currently investigating AusPost’s Digital iD service) so we don’t need to handle any sensitive documents. The main thing we need to be able to do is confirm a person is who they say they are. There’s no need to collect or handle sensitive documents if a third party can verify someone’s identity for us.

The only other documents we’d have to handle are “low value” such as a student ID, or pension card to confirm eligibility of the starving hacker rate.

Thanks Josh & Jaimyn, no problem at all. In my role, everything is a security risk.
The general flow of the diagram seems fine from a high level.