Finally, the new CR-X control boards and displays have arrived!

These took about 2 weeks longer than I was hoping, but they’ve finally arrived!

Two 5.5 inch touch screens, and the matching Octopus control boards, and a bunch of TMC2209s.

I have one more week of holidays after this one, so I intend to get one of the CR-X machines done next week, with config done and up and running with the new firmware, and of course, the BLTouch units to properly level the machines automatically.

I’ll set about to do the right CR-X first, hopefully starting this weekend. First task, mount the board inside the chassis, and start plugging up cables the right way around. 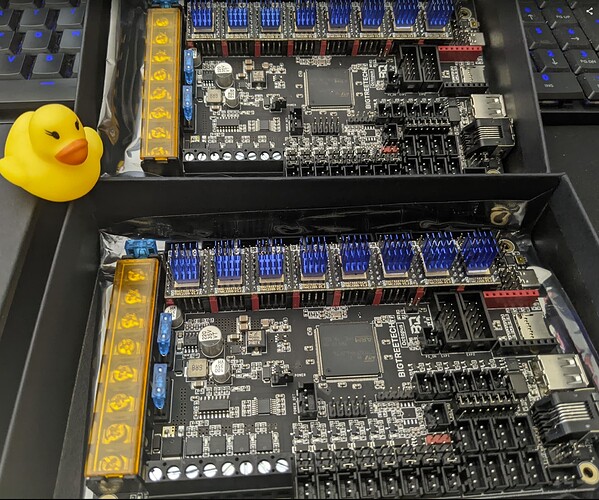 Getting started on the boards, they’ve been flashed with a version of Klipper, configured to drive the TMC2209s in UART mode, and setup so they don’t power up over USB.

I don’t like printer boards to have power via USB, as there’s no need to do so generally. Printer off = Printer off. The firmware solution used can use Tasmota, Home Assistant and a number of other methods to physically power the printer on and off accordingly, even doing it via Gcode if you feel so inclined. Just one more safety feature of powering down a failed machine, there’s zero chance a heater can run away if the firmware has said “nope” and pulled the metaphorical rug from under itself.

One of the nice things is the fans are voltage configurable, so when we get around to making some enclosures, we can put large silent 5 or 12v fans in there, generic for a PC case or similar, and drive them directly off the board. No need to go hunting for silent 24v fans and paying the attached premium.

I’m going to come in later and flip one of the CR-X over to take a set of measurements of the existing mainboard mount and double check all the plugs. I’ll then laser cut a suitable mount from acrylic and reuse the existing mount.

If anyone is keen to help with documenting the process or the wiring, please yell out. Wiring is my personal hellscape, and while I do it as neatly as I can, I do admit to needing many personal timeouts to avoid throwing the whole thing in the bin