Hi,
I have re-assembled (After shipping to Brisbane) the 4-display FPGA R&D Station with which the
FPGA dev board were utilized. Photo attached.
The Displays are LCD-21" with two bridged graphic cards (each supporting 2 lcds), 16GB Ram,
and a G15 Keyboard. MB is housed in a large tower with a good&nice PSU + G9x mouse.
I want to donate it and bring it to the space, but do not know where to place it.
(Would like to make it a proper FPGA learning and Dev station again so that these boards can be ready to use at anytime for anyone who wish to learn FPGA or PCB/SCH editing).
I noticed some space in the game room (I have never seen anyone in that room).
I can get access to a wooden desk if necessary, but I would need to find a vehicle to transport it.
Or anywhere we can get the space to have these 4-displays. The cable to the KB and mouse are long enough to have the tower on the floor somewhere.
Any suggestions where to locate that CAD station?
I should have time from tomorrow until friday to set this up.
This could also be utilized to use the other development boards with their In-Circuit Debuggers and develop/learn about Embedded Dev. 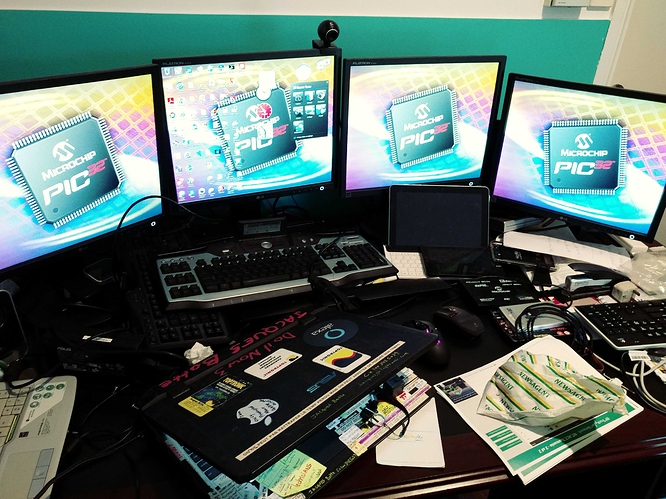 just out of curiosity… other than fpga development, which is a pretty niche area that few people are interested in, what other use/s do you see this setup being used for? Would it be suitable for people to play immersive/3d/first-person games on…? If so, it would probably be welcomed in the ‘games’ room!. …

I can lend a hand with a vehicle to transport things if an agreement is come to WRT finding a home.

Other than the FPGA, there are a now tens of embedded development boards which can be utilized prototype and I don’t mind guiding through where to find the information etc… to use these. (Maybe we should make an inventory with Blair and document it properly so that people unfamiliar with these would be able to get started)
(Also web servers and iot boards are in the drawers in the corner, with all kinds of configurations and processors modules 8, 16 and 32 bits from microchip), but yes, about gaming,
I suppose the graphic cards would be very good for gaming (Not the latest graphic card, but descent).
They are bridged ATI Radeon, the MB is asus P7P55D-E Deluxe 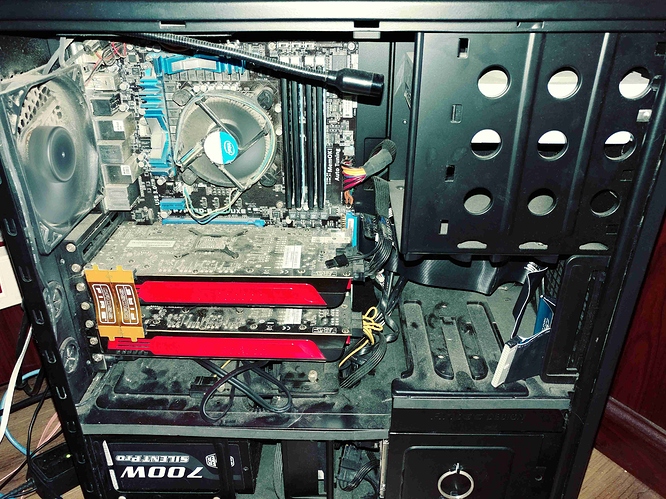 The only thing I will need to buy, is a new fast HDD because the ones inside contains company’s IP.
Also an operating system… or installing multi-boot… to make it all new.

For info, for the Gamers, the graphic cards in this machine are two AMD Radeon HD 5800 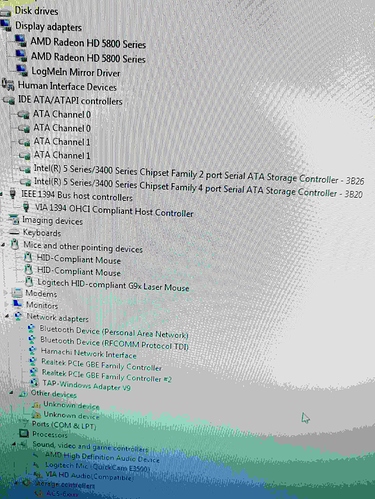 About the Keyboards, there are actually two… (One was used on the nanoboards for prototyping the FPGAs):
a G15 and a G19…

Maybe into Digifab, could be used as CAD machine as well?

Following on your toughs about using that machine for gaming, that make me thing about some accessories we utilized to develop some products with FPGA… and I still have two nice joysticks which were connected to the nanoboards…during fpga development.
I was going to attach them to the FPGA boards (one on the older nanoboard and one on the newer one), but they could also be utilized for the games… 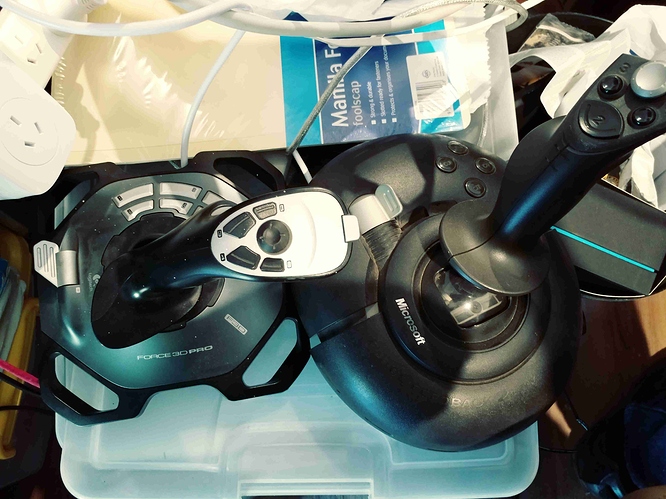 LR_Sticks4640×3480 282 KB
There is a logitech force 3D and a microsoft sidewinder with force feedback.
The gamers could use them for their gaming experience and the fpga developpers to develop games or other applications using the two communications with these sticks.
That way the 4-display cad station can be of multi-use.
I will keep digging into the boxes that were shipped for more “toys”
Jacques_Botte (Jacques Botte) July 23, 2018, 3:41am #9

About more toys, these fpga development boards also have audio processors and somehwere, theyused to have amplifiers on them and microphones etc… utilized during fpga development. There are libraries also to use these and in one of the draws in the corner, there is one or two game development board to learn how to develop games, and probably one console etc… we will have to document these as well.

Yes, it could. Solidworks and Altium Designer (still installed, but the HDD will be removed, I will get a new one) were utilized on this computer as well altium modeller from Desktop-eda (Melbourne software http://www.desktop-eda.com.au/). I suppose the MB is running about everything usefull for CAD, R&D etc…, I just have never tested it with games, but as it was used as a CAD, the games should be ok too. 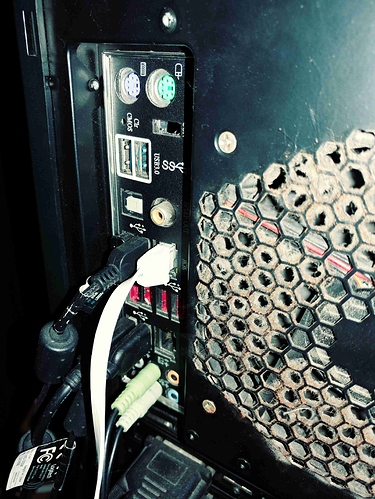 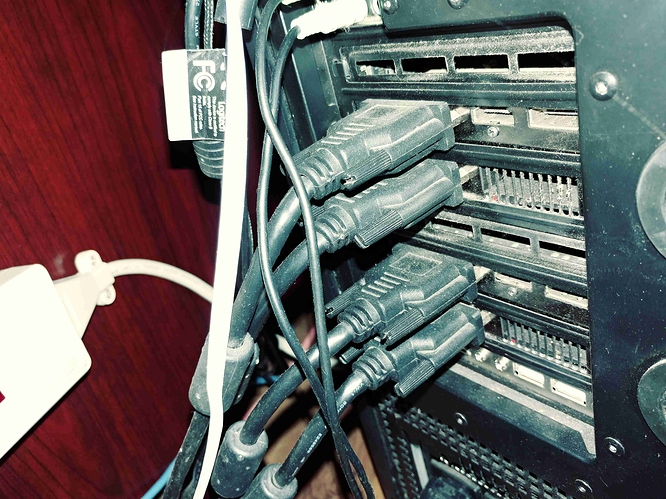 Does HSBNE has a license for Solidworks (or other mechanical CAD) and Altium Designer?
Does anyone have a spare windows license to install on a new HDD for this machine?
As I am no familiar where to buy computer parts in Brisbane, where should I get a fast HDD from?
Maybe 2Tb or 4Tb?

Umart and MSY are the best places to buy computer parts from. We have an Altium server which is maintained by @lhovo, though the process to get access to it is tedious as only @lhovo has the login.

I wouldn’t worry about Solidworks. Just throw Fusion on there.

Thanks, will get one from Umart, as they are on my way to hsbne.
Let see what to do to make Altium available to all through this cad station.
Will check with @lhovo about the licence.

Hi, yes, we can install them and see if everyone is happy.
Still need to find what OS to install or multiple boots?

The CAD Station components are ready to find a space at the HSBNE.
Could we discuss tonight where we will use it, what OS to install, what software to install, etc…
I have the rest of the week off, so I can assemble it and move it where it will be utilized. 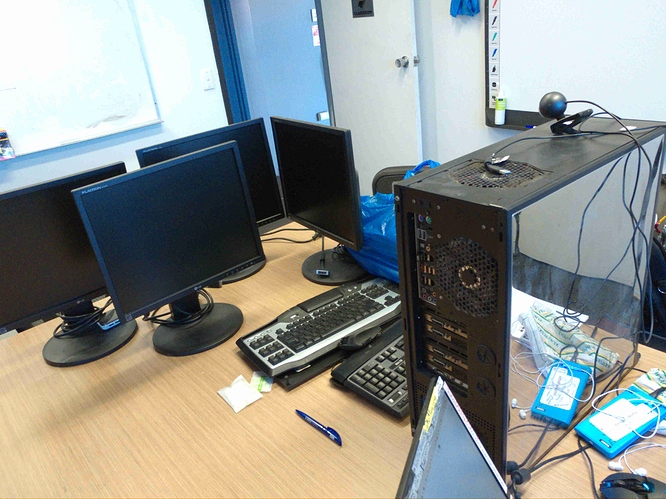 Windows 10 can also be installed without any license key, and it never stops working, it just nags u every so often and puts “unlicensed” in the corner of the screen, but is otherwise functional.

I just want to be very clear that if this computer/fpga/cad/gaming station is donated to HSBNE which is I believe you have stated is your intention, that it becomes wholey-and-solely the property of hsbne and it’s executive and membership, and that you @Testicky, then have no ownership over it, over what it’s used for after that point, over what hsbne as a group does with it, and wether it will continue to be used as a “fpga station” or not.
For example, if no-one other than you shows an interest in utilising 2-3 meters of benchspace in the green room dedicated to fpga ( sad, but poissible) when other causes are itching to expand because of high demand, It might be repurposed, re-used or even disposed of at some point in the future by a decision from the exec or the membership, as per the group rules.

I’m not trying to be negative, I just haven’t seen anyone other than you ( and I) say they have any interest in fpga development at hsbne, so it might not work out as you thought initially. I don’t know yet.

On the plus side, if anyone else out there is actually keen to have a crack at some fpga-learning I think both myself and @Testicky would like you to join the discussion here, so we can perhaps create an informal chat group to upskill on fpga stuff together and share experiences etc.