Got about 10 smartdrive motors I’m going to throw out, few different models and stuff. Got shafts too. These are good for renewable energy stuff (wind turbines etc) or for spinning up as a generator and making sparks. Same config as RC motors - wound stator, magnets in the rotor. 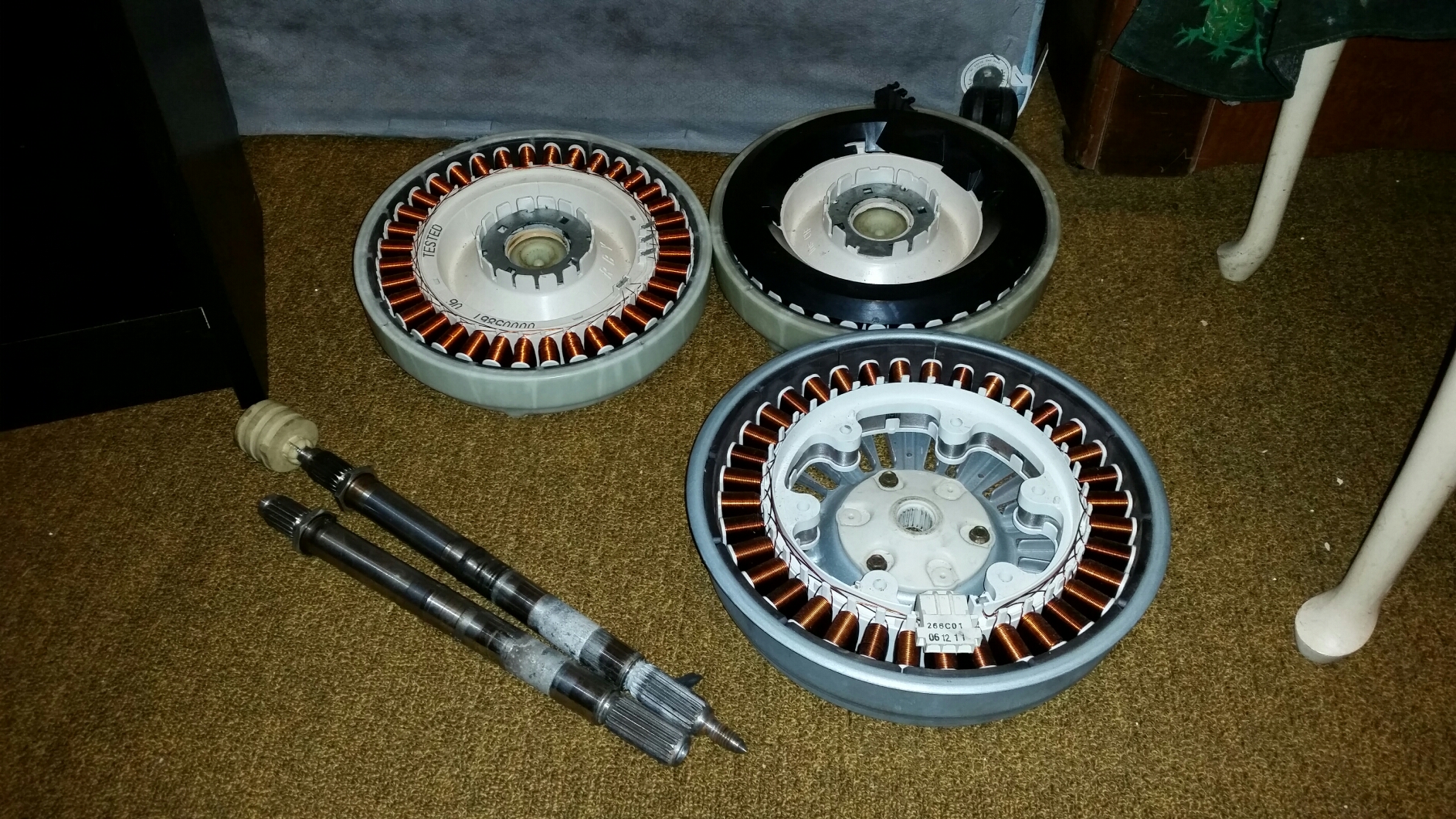 If you want any, speak up. Otherwise they’re getting dumped sometime in January.

@nogthree, @riumplus and @wixted: Would these be useful for WSF stuff?

Also, I wonder what sort of rating these things might have when driven as a brushless DC motor … maybe for something like an e-bike hub motor, or 4 of them for in-wheel hub drive of a gocart or something…?

It is quite windy, could built a windfarm. Get karl’s giganto router to cut out some sick blades. Solar + Wind !!

A brief google seems to think around the 1.2kw mark at the most.

One of the links I provided earlier shows a wind generator that uses two of these making about 1.6kW power.

I also note that in their default configuration, they produce about 400v 3 phase AC at about 2amps, but they are quite reconfigurable.

Even if it didn’t work, having one of these put together (as a hybrid wind turbine) as a demonstration of both e-waste recycling and alternative energy would be great for science week. There’s room in the boneyard for them pls

I’m still super keen to try my hand at turning one or two of these into a generator.

In that case I’ll leave them in the boneyard. All bar one have plastic rotors so you don’t want to push them too hard, the washers usually spin a max of say 1500RPM.

As for wind turbine use, you really want the turbines up where there’s relatively little stuff at the same height as them. A turbine mounted to one of the lighting towers would be great. I’ve looked into this before and I think we’re just under the average wind speed it’d be worth the trouble. If anyone has some outdoor wind speed measurement kit it’d be nice to see what we’re getting though. We could erect something next to the warehouse perhaps and anchor to the containers, but that will probably require some approval from landlord etc.

Anything under the quad (say a HAWT) wouldn’t really be worth attaching one of these generators to, unless it was huge it’d be unlikely to produce a useful amount of power.

In the washing machine use there us some airflow past the stator, however not a whole lot. You’d probably be able to achieve some decent peak powers, but as people have mentioned, the magnets are just ceramic. You’d want to replace these with neodymium magnets for some real power. Can also wrap a steel band or similar around the rotor to help it take the force better.

I would like to have them. Where are they at?

Upnorth. The original post was from two years ago. There are still 2 of them in the boneyard I think (well was last time I was in there doing a bit of cleaning 3 weeks ago)

I didn’t catch that, thanks anyways.