I’ve been thinking about what to do with the giant printer for a while. Basically, it’ll never be a router, it could be a plasma cutter though if we spent a bunch of money on the required stuff. BUT, it’ll never solve the issue of it being rediculously over sized for anything we’d ever use it for. We’re realistically only ever going to put normal sheets on it, i.e. 2400x1200 sheets of steel or MDF to be routed or plasma cut, however, the bed is currently 2300x~6000. Thats never going to be a thing we would get any significant use out of. Its also got at least a meter overhang either side of the bed which makes for an even bulkier machine.

I think we’ve had long enough to make it work and now its time to make something out of it.

Depending on exactly what happens with the new CNC mill, it may have to live in that shed, so space could be at a real premium in there very soon.

I’d like to propose we take it apart, use the constituent parts, like the extrusion and linear rail, bearings and possibly the big steppers, to build something with a bed big enough to take a full 2400x1200 sheet and rigid enough to rout MDF and capable of being fitted with a plasma cutter later down the track.

I’m in, lets do this mama jamma.

I’m reluctant to take it apart, lot of time and money has been placed into the machine.
I’m starting to get a bit more time and willing to work with anyone to get it working.

Plasma I think is the best fit for this machine, as for the size, I don’t think down sizing is a easy option for memory due to the belts running down the length of the machine.

This is why I think we should shink it down a bit, 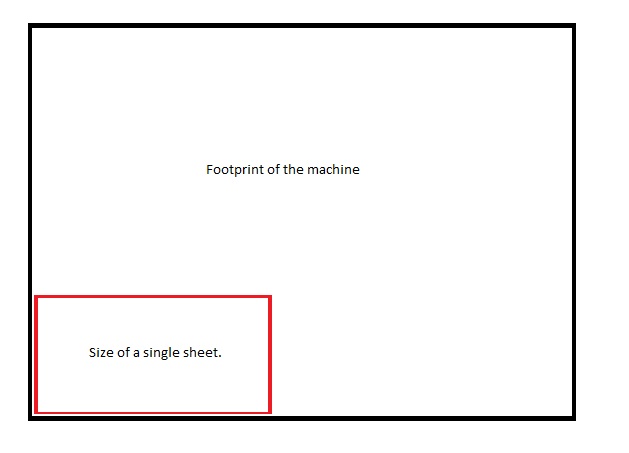 Its comically oversized. We could build a machine a third or probably a quarter the size of the printer, that is a lot more versatile.

All my yeses on making that smaller!

surely it’s worth getting the axes all moving in it’s current state
before “emsmallening” it?   :-)   of course, I’m not going to lick that
cookie, so if you want to do something you think will improve it, then
sure.

It’s pretty close, I got two of the three axes moving, with the third just requiring a gearbox to be good. The movement didn’t seem as consistent as you’d expect say from a stepper motor but it may have just been a configuration thing.

I’ve love to see the 3 axes moving… maybe we could get all interested parties together on (say) a weekend, and get this across the line… and once there, we could discuss the practical elements of possibly downsizing it? ( and if it’s actually going to be workable to do…? ).
just an idea… I’m also wondering if the big metal “chassis” of this couldn’t be made into TWO separate CNC machine/s? ( maybe one belt driven for high-speed work like plasma-torch work, and one for low-speed work like routing wood sheets ) ?