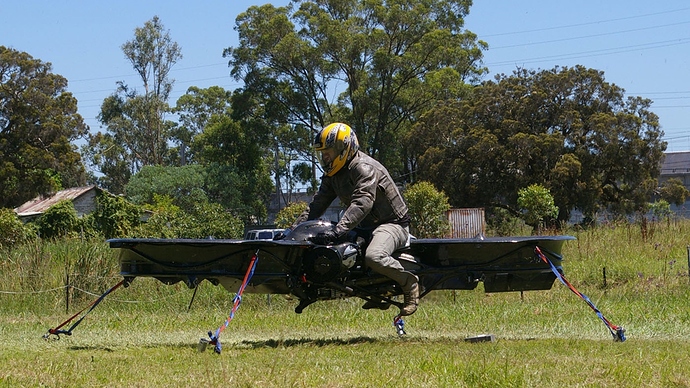 Hoverbike is a revolution in aviation, designed to do what a helicopter does, but cost less and do so better

There appears to be a hoverbike on kickstarter, apparently a revolution in personal travel.

My biggest question, what’s the legality around these, do you need a pilots licence?

This Kickstarter seems to be only for a 1/3-scale drone with a max absolute carrying capacity of 4.8kg, not a full-on hoverbike.

That being said, if you considered it an aircraft then it certainly exceeds CASA’s weight limits for an unlicensed drone and if you considered it a bike it also certainly exceeds the power limits for an unlicensed bike. So I’d imagine the government would want you to have some sort of paperwork, if only to register the device on some list… But I have no idea what list, or if you’d need to be trained to operate it.

I have a feeling it falls into that legal grey-area of vehicles that are technically illegal just because the laws aren’t written with them in mind and not because the government wants to specifically exclude them (for instance, my EV was technically illegal for a while because at the time there wasn’t an engine classification for electric motors so the Dept of Transport advised me to lie & say it was a 1-cylinder petrol engine on the forms). I’m just guessing though. Anyone else have any idea?

This might be the same as snowmobile in some ways. In Australia it’s hard to get a licence or insurance for personal use.

I can’t see you taking it out on the road, but maybe water? So call it a boat and register it as such?

I know surface effect craft (flying boats with max altitude of ~3 meters) can be registered as a special class of boat. Maybe a hoverbike which functions on the surface effect and can land on water would be more legal (and certainly more safe).

I would suggest that if t he full sized version ever flies… that it will be licensed as an experimental by an organisation such as the Australian Sport Rotorcraft Association. They currently do mostly gyro copters but are discussing with casa the opportunities for possibly doing helicopters etc as well. Come talk to me if u want to know more about ASRA.

the only way I can think it ever working is where the bike takes off and lands on hover but uses forward motion like a plane.

you’d have a tri copter approach where two electric motors are mounted in wings towards the front and a petrol driven fan connected to a generator and blade sit at the rear.