The ideas been round for ages, time to kick it off.

Here are some draft rules and general layout of this thing. Open for suggestions as to how we can make them better.

The Spirit of the Game.

We’re all trying to win, but no one likes a try hard. Its about the hack, not the win.

Build goes from at 9am, finishes at 3pm.
At 3:30pm will be the “Swimsuit round”. Contestants will be judged on Level of hackery, overall level of shittiness/likelihood of survival. If your bot looks like it stands a good chance to win the Battle Round, you probably wont score well here.

The Battle Round will be after the Swimsuit Round. Bots will Battle one another in a single knockout tournament, consisting of 3 rounds per match. One wins the battle round by pushing the opponent out of the ring or completely immobilising the challenger.

Forgot to add a date, March 5th it’ll be. On a Saturday morning, two-ish weeks from now.

Also, if you dont want to build a bot, but would like to be around for the thing, Be a judge/scrutineer for the day. Only need one or two, maybe 3 at most.

Me likes it.
Also, my bot is gonna kick your bots metal ass!

On a different note, I think transmitter/receiver should be excluded from the cost as it gets a little hard otherwise to keep the price limit.

Also, do you want to limit projectile/flammable/chemical/electrical attacks? Because, you know, some genius letting off an emp blast while his competitor shoots a flaming acid loaded dart into the face of a spectator is great for insurance premiums.

You dont need a fancy controller, and many dont have these things just kicking around. The $20 limit is all inclusive. Its all about the hack remember?

If its not safe, dont do it, do what you like, if its too dangerous you wont compete. Go wild, but be a little practical. Also the $20 limit comes into play there.

So, Is the goal to push the other bot of the table, destroy it? Shoot it to the moon?

Do you need to submit a bill of materials?

That doesn’t seem necessary at this point.

Im trying to think of criteria by which to judge the rounds. Im thinking. Along with some extra rules.

All bots must compete in the battle round. Swimsuit round is optional, but the overall winner on the day will need to score well in both.

Swimsuit This most prestigious event will be judged on the following criteria.

Can you buy a pre made thing like a cheap toy car from reject shop/stacks/$2 shop, totally strip it for parts and re build it with additional parts to make a robot. Eg to be able to cheaply obtain motors, controller, servos, etc? Or would that count as pre built?

Derp it would have helped if I watched the Japanese video first. That is fantastic! I also found myself coming up with ideas as I watched then seeing something like like my idea later… So I need to find a crappier idea haha.

The event was awesome! The engagement and level of hackery exceeded expectations. Everyone put in a solid effort and the sportsmanship was top-notch considering some of the humiliating and hilarious defeats and destruction of hours of robotic work put in by the contestants.

Unfortunately I don’t have any build photos of the robots I do have some short snippets of the action. There were a few others with photos, hopefully they can all be posted or linked here soon.

Here are the winners of the first HSBNE Robot Fighting Challenge. 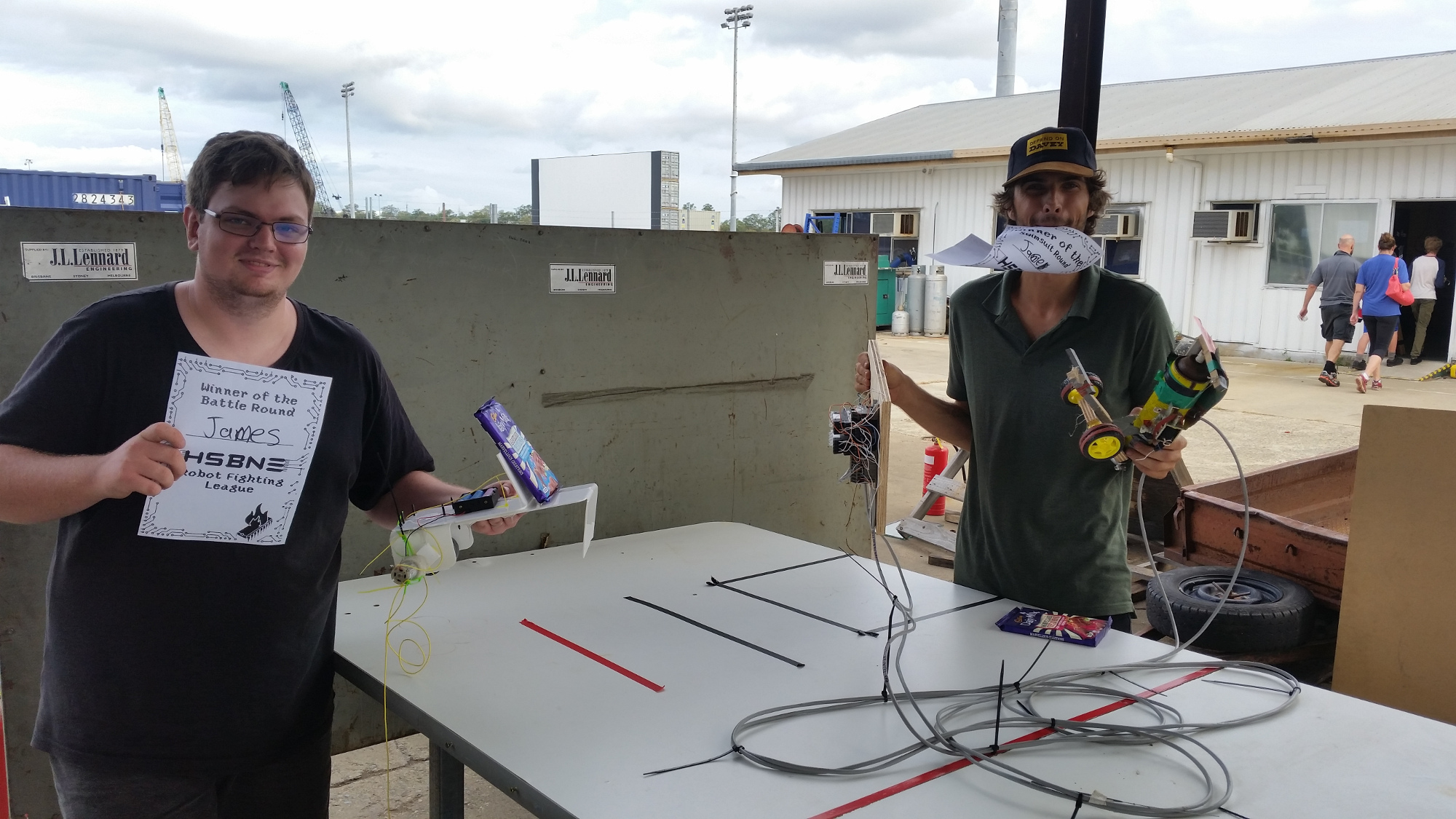 Here is the Fire vs Water Robot battle you’ve never realised, but always wanted to see!