So Tuesday night Internet is a little interesting. We have so many p̶e̶o̶p̶l̶e̶ wifi devices at the space the poor little router cant handle it and wiggs out. The other problem is the range. After a quick drop in signal from inside most devices switch to HSBNEOutside

And we had 5 different wifi SSID’s to connect to which only seemed to have 1 bar.

Thanks to @Thermoelectric and all this wiring, we have 4 new WiFi points at the space with the name HSBNEWiFi (password is as usual) 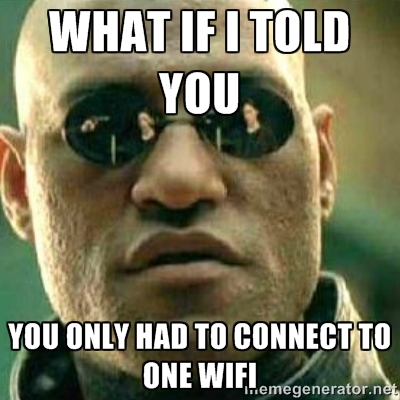 Once you connect to HSBNEWiFi you will automatically hop from one Access Point to the next without having to reconnect or add a password. This will work best if you disable auto connect on (HSBNEoutside, HSBNEoffice, HSBNEwork). You should now be able to walk around the whole premises with 3/5 bars.

We will be testing the performance over the coming weeks. Currently the transmitter power is turned down to ensure devices connect to the nearest router. Also, we have not yet enabled user connection limits or bandwidth control.
The original WiFi access points are still in place and will be until we finish testing, tho the channels have been adjusted which should help.

We appreciate members not torrent’ing or bandwidth hogging on Tuesday nights.

Please provide feedback and let us know about any issues.

(quick run around mapping done on an android phone, green:5bar and dark red:1bar)

After tuesday testing i would like to place 2 more routers, one in the chillout lounge facing the courtyard and one in the boneyard. This should improve the dead area in the couryard as well as to the creatorium and science lab.

Nice map,
Though I assume this wound’t have included the outside link?
Since the outside has a nice antenna’s on it, it should easily fill in the dead zones.

Though I don’t know if it will be too strong and want to be the dominating AP.

Noone really uses that one because of the silent SSID.

Can we make the SSID public and secure it some other way?

Also hally thats a seriously boss map. You’re like the king of hsbne mapping. When are we going to get that special scanned virtual tour?

If its of any use, I have a cad drawing done by @denominator that has the correct dimensions for all the buildings and internal walls.

Can we make the SSID public and secure it some other way?

I assume (with my limited knowledge in the area) if the network is now multi AP on the same SSID the outside link can be configured to be the same with a hidden SSID?

@devians I think the outside is silent because of its ‘great’ range…¿ @lhovo , it might drown out the other HSBNEWiFi AP’s and affect the whole point of this single router issue.

Question: Can we log the mac addresses and the router it is connected to? could be interesting to see where the hives of activity are throughout the week? …Big brother is watching ** meniacle laugh**

Yes please, it would be great to have a detailed map to reference things to!

Pipe dream: have an online map with searchable and categorical information which can also display the internet of things data. Like locations of powerpoints, windows, tables, machinery, equipment, etc
maybe even temp data, solar output data, links to space webcam, telescope cam from map
lets get crazy and even display when the bin was last emptied (info from accelerometer on bin - ‘currently being made’)

I will try and map the outside network when i get a chance, might not post the results tho

I can tell you now its vast.
I used this antenna to get wifi at the bus stop 2 blocks from my house in Tas.

I did a quick range test and you can easily still get good wifi at “The Shed” across the Tarmac.

Surely the limiting factor is the antenna in your device though?

Actually… adding a high gain antenna on just one end of a link can be very effective because it doesn’t just increase the effective transmission capabilities. … it also increases the ability of the ground station to hear (receive) less powerful signals… so your relatively woosy transmissions from your laptop antenna can actually be heard from farther away.

As this is the thread full of infrastructure people, does anyone know why there are two HSBNE_outside access points? Couldn’t quite work that out.

One could be a backhaul to enable networking of the other rooms or could be a node to connected to the brismesh network (defunct?)