I need a thingamajig

Heres a fancy new thread for everyone

If you’re looking for some kind of special part, post in here and let the wisdom of the crowd completely underwhelm, ahem, I mean, bedazzle you!

Lets help each other source weird and wonderful parts

I need a waterproof encoder/potentiometer!

Its for my pushbike light thingo, I’m currently using two momentary switches but having rotational input as well would be super awesome.

I’ve found lots of waterproof encoders and the like, but what I really need is one that lets you push it to select, and that seems less common. Anyone got some tips?

I’m in the market for an old industrial large-format laser printer from the 70s/80s that has a movable head. Not one with a laser head the whole width of the printer, but a small movable laser head. For a brief period of time, early large-format laser printers were essentially a small laser printer head attached to an X/Y gantry - kindof like a plotter but using laser toner. The rest of the printer can be completely broken including the X/Y gantry stuff, but so long as the head is at least repairable I’m willing to pay thousands of dollars as this is for a commercial job. There’s no time limit for when I need this thing by, so if you see one even a few years from now please drop me a line. I’ve searched high and low and found nothing, and I’ve set up a whole stack of alerts in case one gets listed in the various auction houses. If anyone knows where I can acquire one, or sees one in their travels, please let me know!

I’m looking for a Toggle switch that can be “flipped” electronically.
It’s rather a silly requirement but if one exists that would save me making one

riumplus
I’m in the market for an old industrial large-format laser printer from the 70s/80s that has a movable head.

There’s a fellow I know who specialises in recycling laser printers and copiers. He has a fair stash of parts and so forth, and might be worth getting in touch with - even if he doesn’t have anything of that vintage he might the background to give you some ideas or contacts.

Yes like the second link, thanks @denominator!
A toggle switch / rocket switch.

The one you link looks like what I’m after, but at $1k a switch I flinched a lot.

I’m looking for a Toggle switch that can be “flipped” electronically.

I doubt it’s what you’re looking for, but I have this little box with a switch that’s flipped electronically…

Otherwise all I can think of is a motorised potentiometer, or a momentary toggle connected to a relay with two LEDs displaying its current state.

@riumplus Maybe you could modify your useless box just to make it a little cooler.

Get one of these http://www.digikey.com.au/catalog/en/partgroup/et-series/26208 switches and a motion sensor. Then sometimes when a finger gets close to the switch trigger it electrically to switch before the finger touches the switch.

Where can I find refractory cement and Sonotube? Sonotube is a US product : http://cdn3.volusion.com/tjunz.lkrse/v/vspfiles/photos/TUBE24-2.jpg so whatever the aussie version is called I’m looking for it.

Looking to finally get my foundry working.
Cheers,

This company look like they have the equivalent and available at Queensland suppliers. http://www.thetubeworks.com.au/

For the refractory talk to total refractory management. They donated us the blocks for our furnace and do sell to the public

I’m looking for some IP65 or better 2 pin connectors for 12v @ 0-5A, preferably locking of some kind. Has anyone got any recommendations?

The IP spec you referring to is a spec for devices, aka your cellphone, hiking GPS or laptops.
What you are really looking for is the American Military Standard. More precisely MIL-DTL. There is a lot of them but DTL is the one that covers connectors. 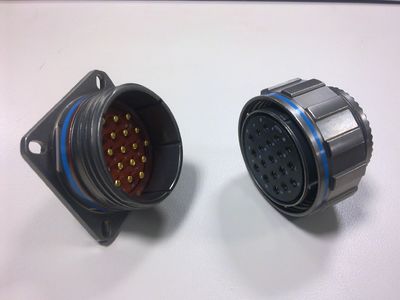 Electrical or fiber-optic connectors used by U.S. Department of Defense were originally developed in the 1930s for severe aeronautical and tactical service applications, and the Type "AN" (Army-Navy) series set the standard for modern military circular connectors. These connectors, and their evolutionary derivatives, are often called Military Standard, "MIL-STD", or (informally) "MIL-SPEC" or sometimes "MS" connectors. They are now used in aerospace, industrial, marine, and even automotive comm...

All the electronics shops, aka elemnt14, mouser… got connectors to that spec.
I guess you need them for your bike?

I’m looking for people who can create physical models from virtual 3D mesh models. I have a client who wants to create a 1m x 1m model of their farm using a 3D point cloud mesh model developed from aerial images. I think this would be ridiculously expensive and probably impossible using conventional 3D printers, but maybe there’s another way I don’t know about?

Would a CNC mill be able to make it?

presuming a 100cm x100cm x ~5cm finished size, where most printers can do up to 20cmx20cmx10cm, then this would result in a set of 5x5 “tiles” from the 3D printer.
I’d suggest that most of these would need to be printed “overnight” on a typical printer ( ie it’s gonna take more than 8hrs each ) , so best-case scenario, it’s 13 or more days and nights of baby-sitting a 3D printer through all these prints. …and it might take up to a month to do if just printing one tile per day.

Whats the resolution of your mesh?

What is the final model meant to look like - an abstract angular model - or painted green and lifelike looking?

Does it need to be easily moved after creation?

Do you have an aerial photo of the farm to see what the topography is like?

These questions (and maybe more) will point you in the best direction for what you are after.

Sadly I don’t have a lot more info at this stage. I am an aerial survey operator who creates virtual 3d mesh models from point cloud photographs, but I’ve not been down this path at all before. I have a customer who wants to do this. I believe the final model needs to look like a miniature of the farm, but could be all one material (ie, monochrome). I think what the customer has in mind is like those light wooden models you bring back in a glass case from an Asian holiday. I actually think someone who creates models out of cardboard would be able to do this, but I can’t find anyone.

What is a CNC solution?

CNC (Computer Numerical Control) solution would either be a large block of foam and cut it out as one piece OR slice out layers/sheets to follow topographic lines and glue the layers together.

Either of those ideas and you are good to go with a monochrome stylistic model of the farm.

If there is going to be a lot of post cutting work (like painting and putting on little Preiser brand sheep and trees) then the initial method of getting the topography is a lot less important as its going to be covered up anyways.

If you have the mesh model already - I can CNC cut a minature 100x100mm version for you out of modelling board for you to have a look at and see how you feel about that.