Inertial bike computer, and Arduino 101 can of worms

Bike computer that shows power input, based on accelerometer/gyro in an Arduino 101 (Intel Curie). This looks like a very nice Uno replacement, with its own accel/gyro built in. The display is a 2.8" TFT from DisplayModule, with 2Mb Flash and a touch screen. Next problem is that the display library will not compile for the 101, because it talks directly to a lot of AVR-specific registers. I’ll need to port it to a standard SPI-library style of communication. 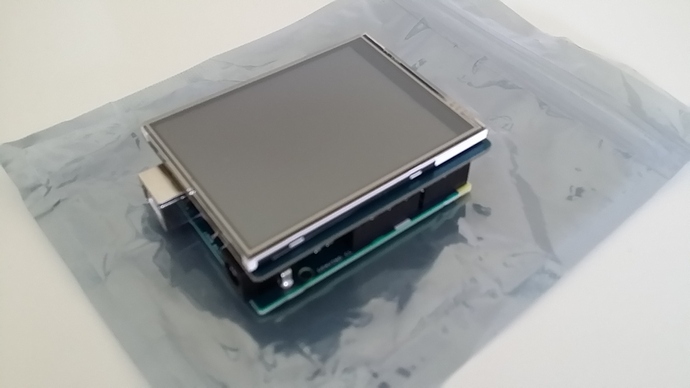 Seems the display and the 101 board don’t play nice together. When the display shield is plugged in, the 101 will not respond on its USB port at all. Thought it might be a supply voltage mismatch but the display is spec’d to work on either 3.3 or 5V, and to work on a Uno. Any deal-breaking hardware issues that would make a Uno-compatible shield not work on the 101?

Checked supply voltage and regulator outputs - the USB was supplying 4.3-4.4 volts which seemed a bit low. Plugged in a 9V powerpack and the thing came alive on the USB port, at least for a few seconds, then stopped responding. The regulator seemed pretty hot! Pulled the display out again and checked regulated voltages - still all good. But the 101 is bricked. Turns out the powerpack was giving 13-14 volts, which should be OK for the 101, but the extra current draw of the display must have been too much for it.

Next display will be independently powered, needless to say. Adafruit does have a display library ported to the 101 (it took some finding, but it’s mentioned on their forums) so if I can get one of theirs I’ll try with that. And not use the 101’s internal regulator for anything off-board.

Have not had time to get back to this, but I’m writing this up as an Android phone app. Most phones have accelerometers and gyros, but I daresay the Curie ones are better quality. We’ll see. It’s a good cheap (=free) way to prove the concept, anyway. The phone has a much better display than anything Arduino, and the dev environment is MUCH better. A Debugger! And Documentation! I’m spoilt rotten. Waiting on a bike phone mount (from eBay) to test out on the road…