Off grid diesel Generator doesn't run for more than 30 seconds

I just made a 2min video to document a problem we are having with our backup diesel generator for our of grid community.

If you have any clues or could forward this video on to anyone you know that could point us in the right direction it would be much appreciated! thanks for any pointers.

My vote would be for oil pressure sensor…

Looks like the EDIC (controller) to me, the fuel line running from the injectors (on top of head) back towards the tank is just a return line, the fuel pump draws the fuel in and there seems to be no fuel problems at all which is good news. I had a similar issue all the time with my old toyota diesel, you just need to give it a rev just after start up to 1800rpm (1/3 throttle) and the EDIC will get the oil pressure signal it needs to keep the motor running. (also this is an old school lister diesl, no common rail, no EGT, no O2, no fuel pressure and no MAP) the oil pressure sensor is just behind the EDIC shut-off solenoid in the video.

in tweaking an already overtightented bleeder (10mm bolt), I’ve dethreaded the part that mounts the fuel filter to the engine, so I’m waiting for a tap to arrive to make a new 12mm thread, and then ill continue where we are here.

D’oh, was there anything wrong with the fuel system? Did you give the genset a rev after start-up to see if that fixed the original problem? Good luck

you can’t rev it because theres a solenoid attached. theres no throttle on the generator apart from that solenoid

So after investigation, we realised that there was no voltage coming off the alternator. we pulled out the AVR and tested it with 12v like it says in the manual, but no voltage comes off the output, so theres no power going to the exciter coil. The AVR according to the Australian distributer - Powerlite Gensets is $1000. ouch. I’m now seeking if there is a more resourceful way to fix that the thing, but its all epoxied up. dirty tactics. The part is LSR790-049 Leeroy Somer 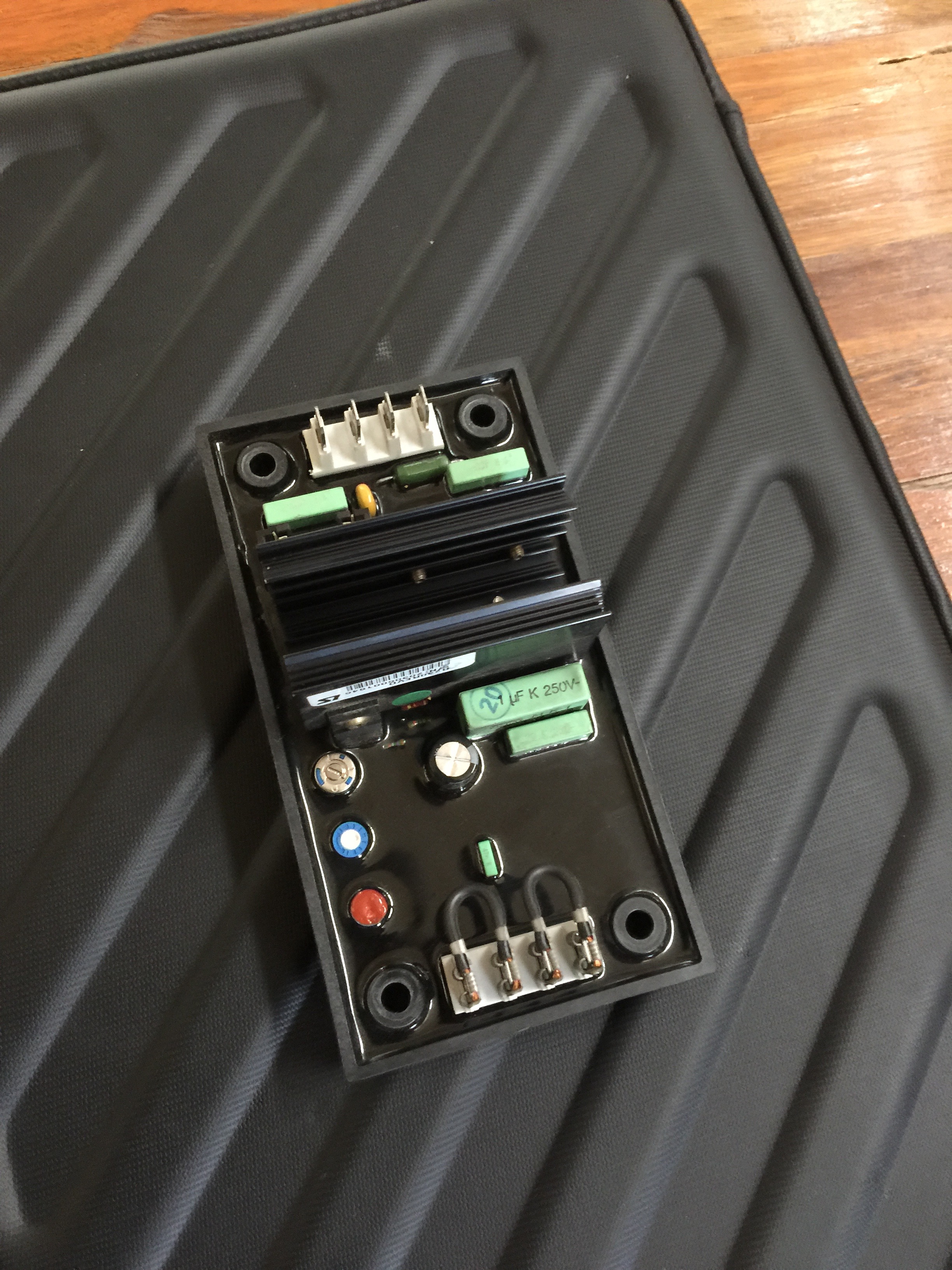 www.ashdown-ingram.com.au might have a suitable part? They’re an autoelectric wholesaler that sell to the public

We got a professional to look at it, $400 just for the call out but im glad we did it because we learnt alot. be nice if someone was able to help for cheaper but, its the worst case scenario - the alternator has some windings that are messed up. the whole thing should be replaced though because it obviously hasn’t been looked after, the varnish is meshed up on most of the windings and dust and crud build up has gotten the better of the system after 10 years. he recommended using compressed air inside the windings to eliminate dust every 6 months, and running it for an hour once a week to eliminate moisture build up, which is why he says almost all alternators blow do so on the underside. so good education for looking after alternators i guess. Its just that $4k is going to hurt.

there’s only one alternator in this guy, its huge, its on the 240v side.

Hmmm, that’s unfortunate, seems like there are more problems than first thought. I don’t know if I can offer any other help. Good luck with it, hopefully a good clean will fix it.

Just a side note, at about 0:30 in your video you can see the starter motor (silver left) and the 12v alternator (silver right of screen).

we found an alternator for 2.8k. this is going to hurt a bit. now just need to find someone qualified around here to install it.

From what you’ve posted it seems like the 240V alternator (big yellow vented thang off the driveshaft) is down to earth/not producing enough voltage to latch the controller in and keep the unit running?

You’ve gotten quotes for replacement units, have you looked at having the unit rewound?

As an aside, diesel generators I’ve worked with in the past don’t tend to have a manual throttle control as Diesels seem to work best at a constant RPM, so they vary the throttle postion automatically to keep RPM dependant on loading.

All the control stuff with the servo is being switched off by the electronics because the alternator produces basically no voltage. mechanically everything is fine. We’ve checked the resistances on the windings and two are shorted. It hasn’t been maintained properly and the whole thing should be rewound. Three places we’ve spoken with says rewinding the whole thing is not worth it.