Hi I used to be a member back before the space was moved down to dockside, I doubt anyone remembers me, I wasn’t around for long, life got in the way.

Anyway to the topic of this thread, the MM1 Pressure Control Valve from Proportion Air retail for about $335(US) and I need twelve of them for a pneumatic telepresence robot project, so I’m looking for alternative way of getting what I need because I don’t have $4050(US) just laying about.

I could just use normal “digital” solenoid valves (as in they only have on/off states, no variable pressure or flow control) but the motions they create are jittery and inaccurate. I’ve considered several ways of mechanically reducing the flow (ball valve, pinching the tubes) but it’s the pressure I want to control whilst retaining the highest flow rate possible.

So if you don’t mind lending me your educated opinions, do you think it would be cheaper to create my own pressure controlling valves using a gear-motor to drive a lead-screw which adjusts the force on a spring, to basically make a variable pressure regulator?

FYI the system’s operating pressure is 100psi, though I would like to increase that to 200psi, maybe 250 if I can find/make a release valve to prevent damage to the actuators, this isn’t necessary I just want more power because frankly who doesn’t?

And if the gear-motored-variable-regulator-valve-thing-idea holds water (both figuratively and literally) do you think a solenoid would be better? For the same size/weight a geared motor could produce far more force, thus allowing for higher pressure and/or a greater flow rate, however it wouldn’t have the right-fucking-now responsiveness a solenoid has.

Any and all opinions welcome.

Also a cold beer for anyone can find or knows of an already existing and economical solution to my problem.

I’m not experienced in the field but the first thing that comes to mind is a standard RC servo with a cam mounted on it, which pinches a suitably-sized section of silicon tubing (possibly with a static teflon shim between them for reduced friction/wear). 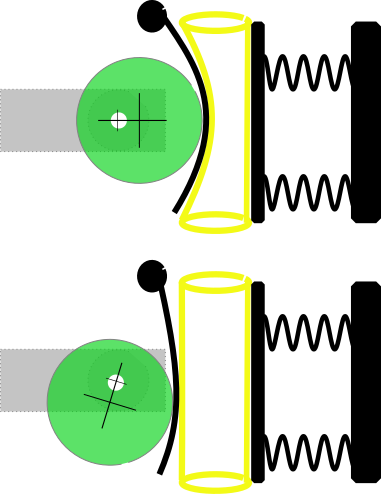 If you placed a spring between the tubing and the cam (or perhaps spring-loaded the bearing surface on the opposite side of the hose from the cam) would that convert it from flow-regulating to pressure regulating? I’m imagining the spring yielding to large pressure differentials but I don’t really know how that works in practice - I can’t isolate the concept of pressure regulation without it being tied to flow in or out. I think the spring would improve “transient” response but I might be completely wrong on that.

You could experiment with different cam profiles if a non-linear response gives better start/stop performance at the point of opening/closing. If the design works it seems like something you could 3d print fairly easily, with assembly involving just snapping the bits into a printed carrier shell.

I took a look at the maintenance info for the mm1 valves, it looks like they just use solenoids, so the proportionality comes from the built in “capacitance” of the controlled volume of air and using feedback to decide whether to add or bleed air as required. I wonder if you could take normal solenoids and use PWM to reduce jerkiness during the first opening and closing stages - if the pwm causes shuddering either pulse them at a higher rate or add more volume to the controlled side (longer/wider hose, a reservoir etc) to soak up the pulses. This assumes that valve chatter noise won’t be objectionable.

PS: Oh, another idea if you find cheap solenoids is to gang them together in parallel - open one for a smooth start then open the other as well for increased flow, or both at once for RFN response

That would work as a proportional flow restriction valve but either the air will have enough pressure to pass or it won’t and if it does it will continue to flow until the pressure has equalized, there’s no way for back pressure to close the valve once the desired pressure is reached.

Here’s my geared motor with lead-screw and spring idea.

The purple things (not the big one) are O-rings and the thing with diagonal lines is a compression spring. 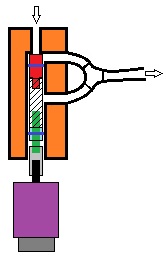 This would require an additional Y adaptor and port adaptor but they’re cheap, whereas having it machined the other way would be fairly expensive, this way it’s just a cylinder on a lathe with four holes, two of which are tapped.

It can’t be this simple, all the proportional-pressure valves I’ve found are +$300
Pairs of these could be made for under $100 (not an expert).

Do people who do animatronics just make their own valves?

what about some sort of “fixed” pressure regulator ( like a scuba one, or a LPG, or one for compressed air ), and since most of these have a “knob” for adjusting the output pressure, just attaching a motor/servo to the knob. There sorts of regulators ( for air) can be as cheap as $15 or less . 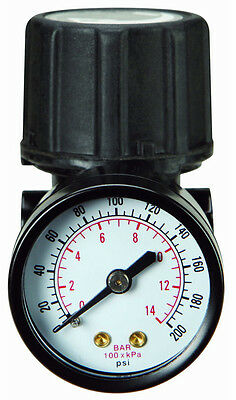 Cool, thanks for explaining how they work. I wonder if torque might be an issue for automating those off-the-shelf valves - probably worth dropping the coin to find out.