(This is a shortened version of an entry on my website. Check there for higher-resolution photos & more details)

For the 2018 Supanova pop culture convention my costumes needed an audio box to play music that I could dance to. It ended up being was one of those things that “should” have been easy, but because I used cheap Chinese parts & left it to the last minute, it became a giant cascade of one hack after another. The idea was to have a button that when pressed played a short piece of music to accompany that day’s costume variation. I wanted the front button to be super enticing so other people would want to press it, and nothing’s more enticing than a giant glowing red button. I eventually got there with everything, but it ended up way more complicated than I had anticipated.

The software on the box isn’t too complicated – press the button, music plays for a bit (just the first stanza). Press it again while it’s still running, it’ll play a little longer. The list of stanza stopping points was all pre-calculated per song. I’ll say right now, with anything like this it’s very important to consider how trolls could abuse what you’re building. In this case if someone ran up, pressed it a dozen times in quick succession then ran off, it only extended the music by at most one stanza beyond what’s currently playing – if you wanted to keep the music going you had to stay there and keep on pressing it as each stanza plays. And yes, many people tried doing that – much to their frustration when it didn’t work. 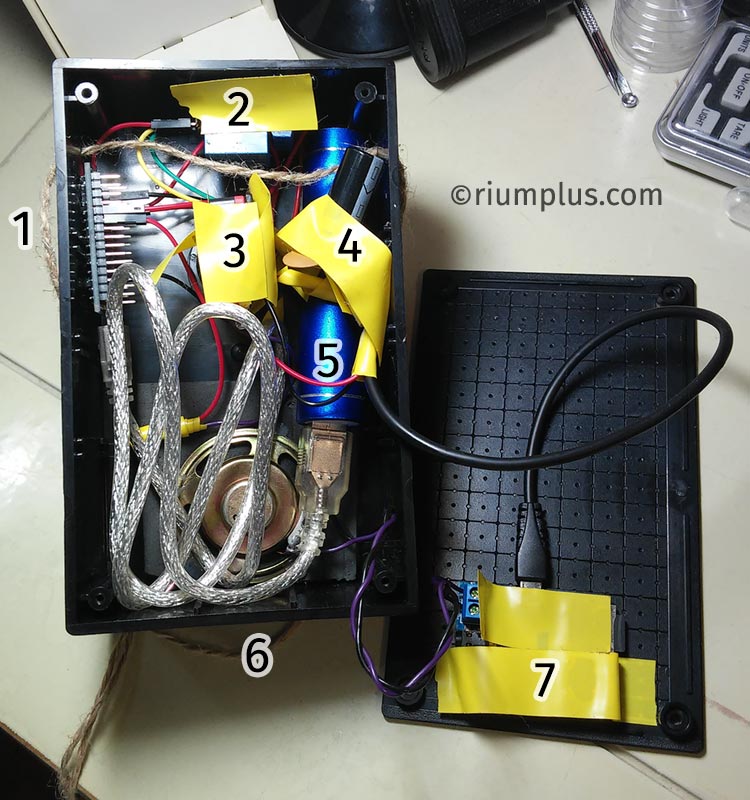 Now for some of those hacks I mentioned:

If I had one piece of advice I learned from this project, it’s that knock-off parts from China can get you by if you’re on a budget or while you’re testing things, but for the final version I absolutely recommend purchasing the genuine products. This project would’ve taken me a fraction of the time it did if I had just spent a little extra for quality parts in the beginning.

(If I had a second piece of advice, it would be to set yourself a deadline well before something’s due. That way you’re not stuck hacking things together at the last minute from whatever you’ve got on hand plus what you can buy locally at exorbitant prices… But we both know neither you nor I are ever gonna actually do that one)

This audio box’s going to be disassembled shortly, because I need some of its parts for another project (and it also served as a semi prototype of yet another underway project… I have too many things in progress).

Much plot. Many twist and turns. All advice.