Controversial topic here but I’d like to raise it anyway. We have three printers currently that don’t see much use because maintaining them is time consuming and difficult because they’re either rather old or rather custom.

I’m talking about the Taz 5 and the two CR10 printers.

The Taz has been kicking around a while and has been rebuilt a few times, but there is no real local presence for Aleph Objects/Lulzbot to get parts for it - and it’s a very outdated machine by this point which parts just don’t exist for it now.

The two CR10s are original CR10 models from the first few years of Creality entering the market. The Z axis gantry on them is only supported on one side, which we recently bought BLtouch bed levels to try and mitigate - for CR10 Left this wasn’t possible due to how skewed the Z axis gantry is now. The control boards for them had to be upgraded to even support the BLTouch.

What I’d like to propose is that we sell off these printers to local 3d printing enthusiasts who will have infinitely more time to tinker with them and replace them with printers that are more solid performers. For the CR10 printers we would take the new 32bit control boards out and the BLTouch off as these can be transferred to any of the Creality branded printers no issues and is not a lost investment.

I’m starting this thread to get us thinking about what we would accept for selling them, and what we might replace them with.

I’d suggest the TAZ5 would be worth at least $300, and the CR10 printers around $150-200. We should keep the cost down on these as a community service and offer them to members first.

For replacing them, there’s a few good options out there now, listed below in order of cost+complexity considerations:

Personally, I’d prefer we went with the printers without an enclosure as we’ll be looking to build standard sized enclosures for all printers with the same featureset and it’d be best to get all of them together.

My vote would be on an original Prusa MK3S+

They print amazing out of the box and there’s no need for BL touch, new control boards or other “upgrades”
Anyone can read a standard manual for the machine and there’s no confusion over parts that have been added to improve the printer
They just work and when they don’t it’s not fixing a hacked together printer

If you can afford 3 or 4 Prusa clones I would go that option. If you can only afford 3 or 4 by getting the cheaper printer then get the cheaper one. As rock solid and unbreakable as the i3 MK3 is, the talent available at HSBNE for breaking things is truly awe inspiring so no matter how solid something is you need multiple redundancies.

My two cents has me advocating for the Ender 6. All of those printers listed have pros and cons, and I’d happily use any of them.

The Ender 6, because the enclosure is integrated and built into it, it’s core xy meaning it’s easier to deal with tuning the movement, and less wear and tear simply because of less moving mass, and parts are common and readily available.

The Ender 5 is a H-bot style, carrying an extra stepper around with its movement in the Y plane.

I’d also advocate whatever choice was made, a BLtouch or equivalent sensor was added. I know many people have their paper leveling process down for them, an automated measured leveling and zeroing process goes a long way to removing the dark art of knowing just how much scratchiness should be felt on which piece of paper on what bed surface with what nozzle…

I was reminded this of this last night zeroing in a borrowed Ender3, and despite having been printing for years now, it was a different experience to other printers I’ve had. I was scratching around in my tool box wondering if the owner would object to me adding a BLTouch for them (they wouldn’t, thankfully, but I do owe them a glass plate

Maybe removable flex plates too, reduce the wear and tear from removing parts, and allowing more rapid use between printing?

In terms of enclosures, the prusa fits perfectly into an ikea Stuva Cabinet. This is the one I’ve got setup at work. I put a rubber strip around the door to seal with some over center latches to lock the cabinet. 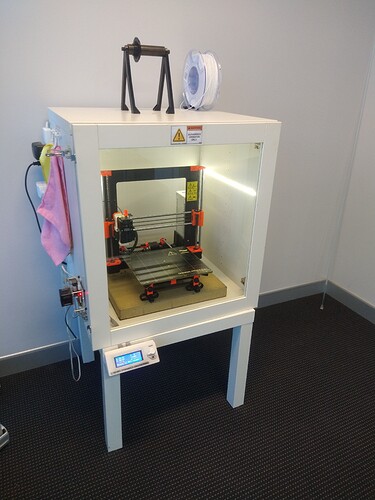 David, The Prusa as well as having a removable magnetic bed and a Z height sensor (magnetic rather than BL touch) also has a cool feature in the newer firmwares.

You can have multiple Z heights stored in EEPROM for different flexi plates.

The TriLabs, the Original Prusa and the Energtic beds are all a different thickness. When you swap between them you can just select which one you have on the firmware rather than having to reset the Z offset manually.

I know CoreXY is cooler and I have a 50% built Railcore here because its cooler. But for slow and steady PLA/PETg printing with no hassle I think the Prusa is hard to beat as a total package.

If they had the budget for 4 Voron (or railcore or SecKit) that would be cool. But 4x any CoreXY with real rails (not 2020 V-Wheels) is going to be a big $ hit.

You can have multiple Z heights stored in EEPROM for different flexi plates.

A sensor should remove this need, because zero is always the measured difference between the nozzle and the sensor detection point on the bed. Yeah, I’m spoiled by a firmware like Klipper.

The faster a lay user can get to something productive, all the better I say!

And even the best amongst us still often forget to do a small tweak before starting a print.

If they had the budget for 4 Voron (or railcore or SecKit) that would be cool. But 4x any CoreXY with real rails (not 2020 V-Wheels) is going to be a big $ hit.

As much as I’d love to contribute to a Voron build, I’m with you, there’s an element of maintainability that needs to be addressed.

Constrained linear rails or rods are always better than v-wheels on extrusion (glares at the dbot that’s about to be disassembled), however I think Creality have established that it can work well, and parts are cheap when required.

Yeah I originally suggested the ender 6 as it makes the best set of compromises for the space in my opinion. Enclosure built in (so no extra work), core XY, and decent build volume, easy to maintain as it’s very similar to our existing creality printers.

It’s great to see this discussion so far and there’s some excellent points raised.

I’m really enjoying all of the contributions and collaboration here, thanks guys!

I also forgot to mention the Up Mini in this. The up mini can be a workhorse but it doesn’t see much use currently because most people see it as ‘that super small bed ABS only printer’. I would be keen to see it retired as well, and would actually be happy to be its retirement home since I’ve maintained them for years and have been maintaining it for us.

I also forgot to mention the Up Mini in this. The up mini can be a workhorse but it doesn’t see much use currently because most people see it as ‘that super small bed ABS only printer’. I would be keen to see it retired as well, and would actually be happy to be its retirement home since I’ve maintained them for years and have been maintaining it for us.

And here I was hoping to see it return so I could run off a few small ABS parts easily without messing with non-ABS focused printers at home. I can’t do long jobs at the space anyway due to the requirement to be on site. May the Up Mini enjoy its forever home

Maybe in any discussion going forward, an ABS capable printer, as would suitable fast PLA printers. Physically large printers aren’t beneficial if they aren’t fast enough to do a job in a reasonable time.

In light of the requirement to be on site during printing, SPEED is king.
The fastest printer possible means bigger or more jobs per visit.