This project is superdoops easy and a christmas present for my step dad. This is a sign made with timber screws used in the lettering - I used this instructable here as a base: 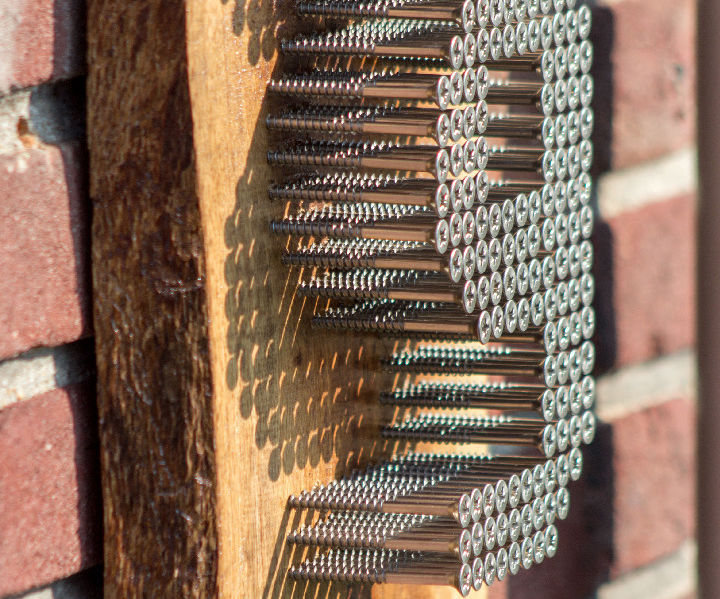 Modern Stainless Steel Home Numbers DIY: Just after we bought a house I discovered Pinterest. We had to wait six months before we got the keys so I had some time to pin interesting home ideas. Months of obsessive pinning passed before I finally...

I began by marking out the pattern as a 8 x 8 mm grid and marking out the font manually. I was going to use excel, but column formatting does not seem to be my forte. I used the font [Yoster Island][1] as a guide to mark out the pixels on the grid. (get it? Mark it out… ha ha) 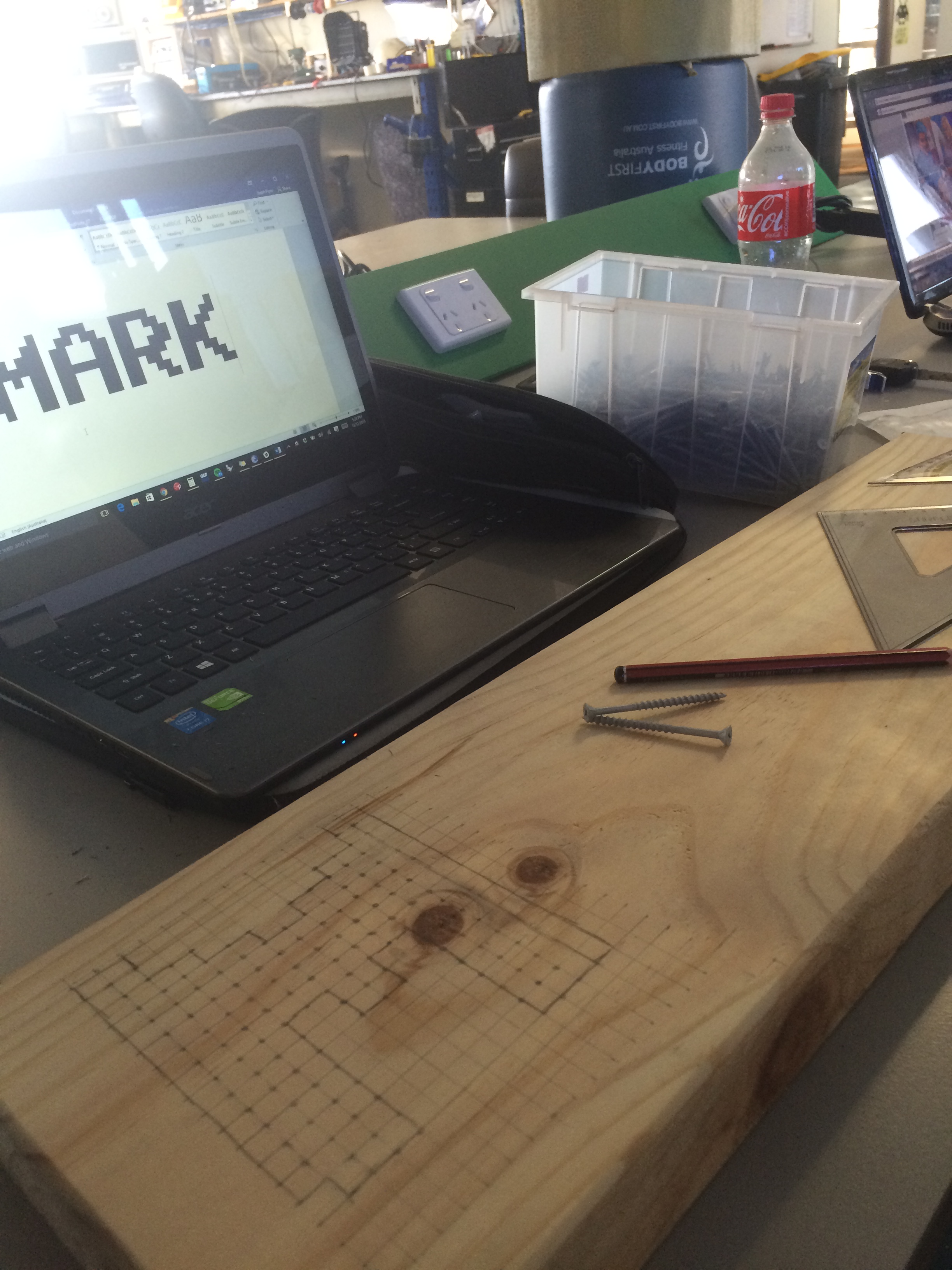 I drilled the pilot holes by hand. Next time I will definitely be keen to use the CNC! 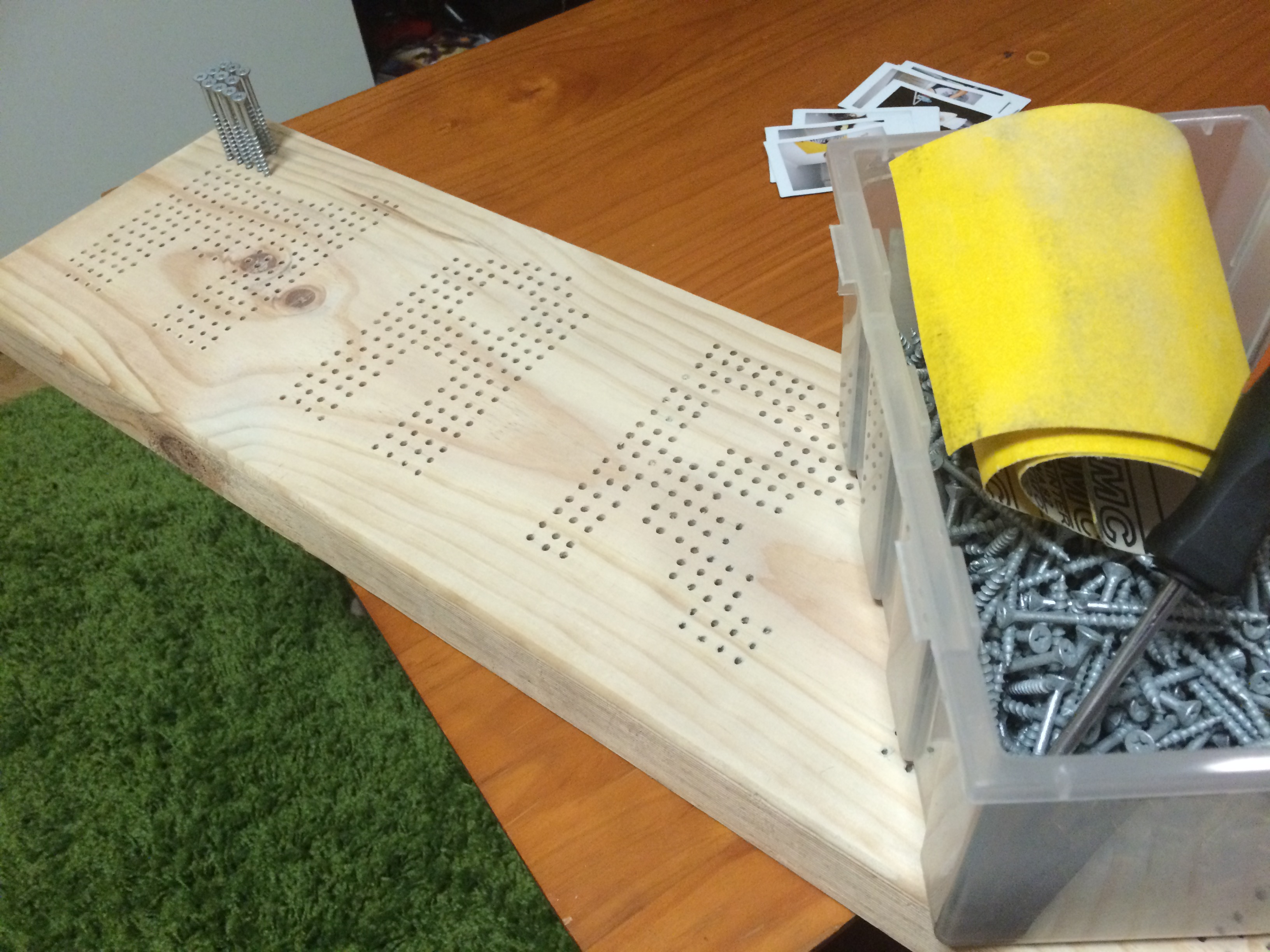 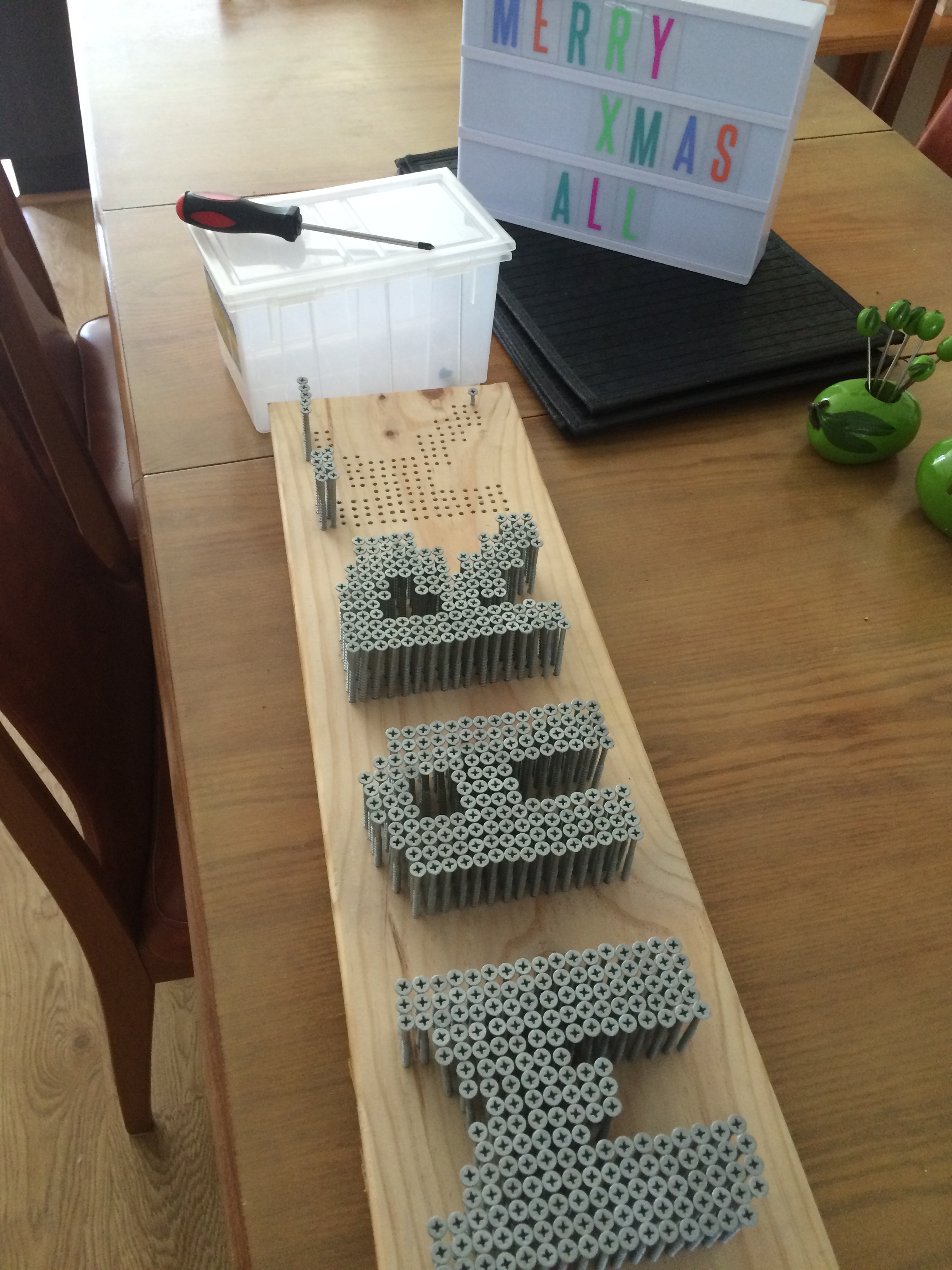 I found a tiny screw in the bottom of the box. I’ve decided to take care of it until it grows up. 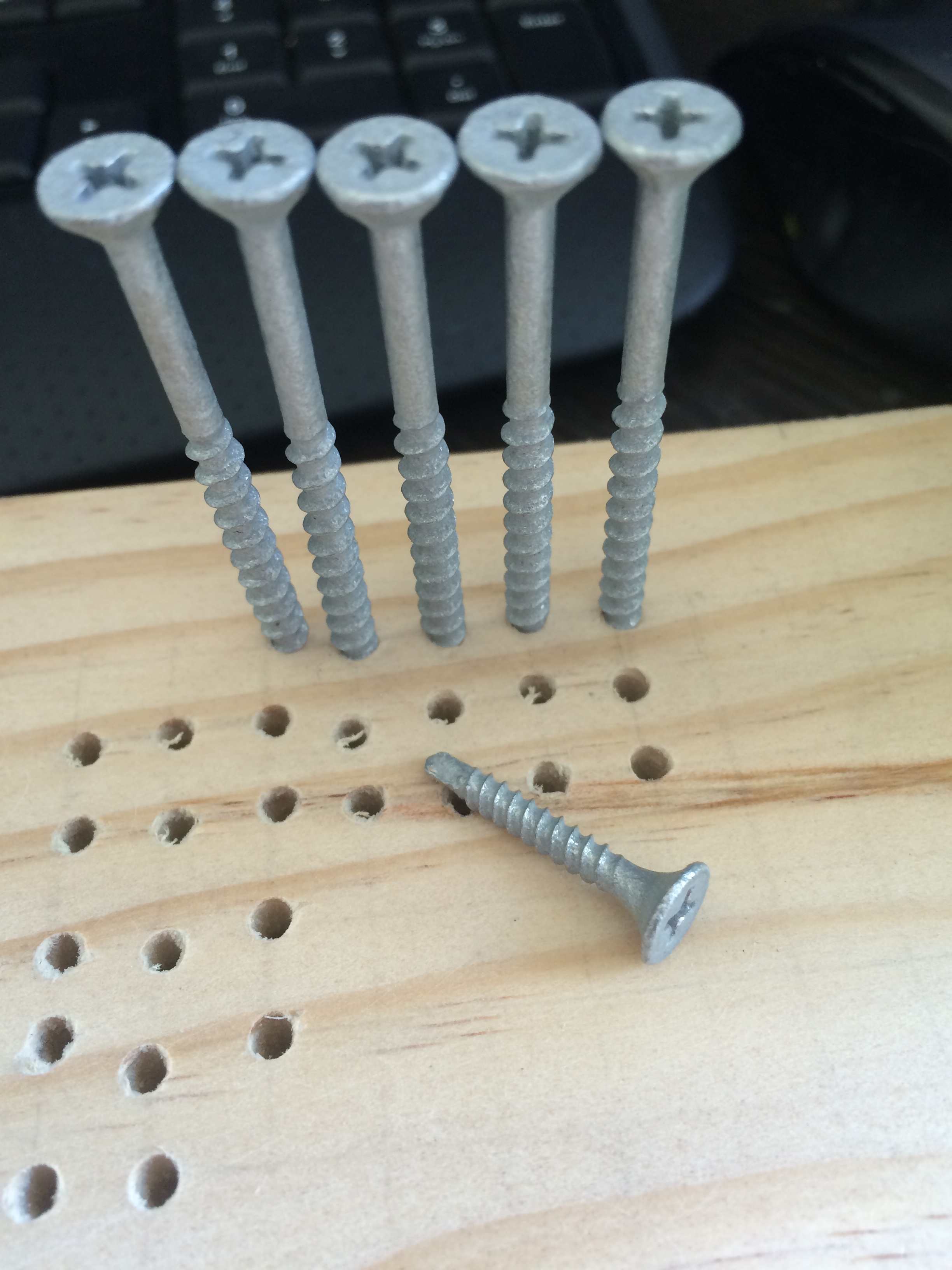 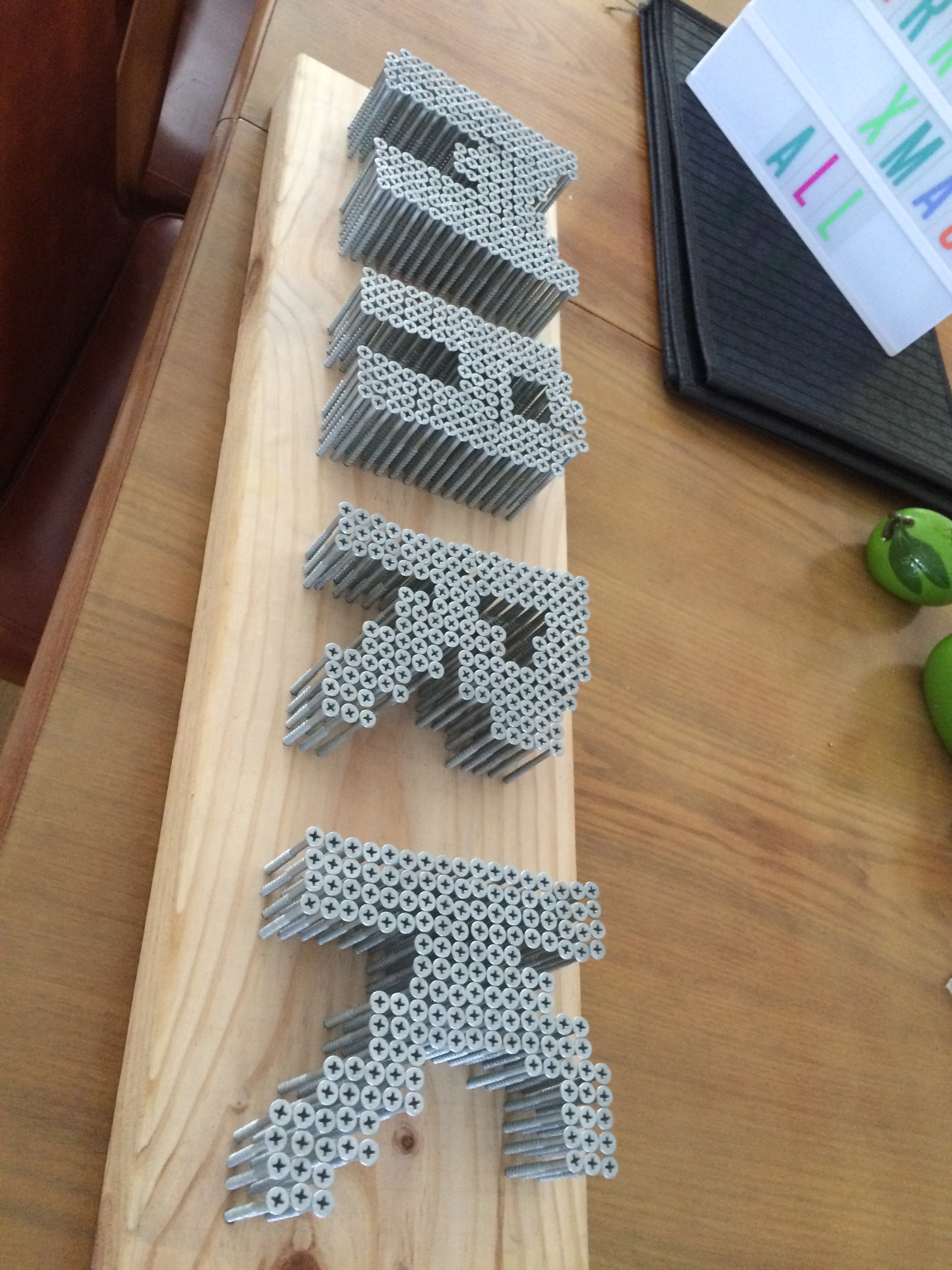 If anyone would like to do a similar project, I have a spare 47 screws to throw your way.
[1]: http://www.fontspace.com/codeman38/yoster-island

Can’t believe the lack of screw puns on this post.

Seriously though, cool project, how long does something like this take?

Yeah, I really could have driven those jokes into ground… Took about three nights in front of the telly. Probably would be a lot faster using a drill. I was just being meticulous with position and height.

Seriously though, cool project, how long does something like this take?

wow what a screwy project, that would send me round the twist!

I have some spray acrylic if you want to gloss it up on tueday night?

That would be great! I’ll bring it in!

I think we wood need more screw-related puns in this thread to really bring it to a head.

we don’t want the humor to taper off now, keep it on-point though!

Idk, i’d say we are nailing it.

I am not sorry for driving this thread down into a hole, you wood have done the same. In fact like most screwed up things it turns out the opposite way to how it should go down.

If you still have left over screws i would love to have them.

And by the way that looks great