So, all that weird metal stuff I've been making

As you might know, I own a gym down in Rocklea. A big focus of my business is running strongman events and competitions, and this year again I am running the 2019 Australian Strongman Alliance Nationals. Last year was a pretty awesome event, and we had a number of competitors use that competition to qualify for some of the biggest events around the world - Strongman Champions League (World’s Strongest Man but for lighter competitors) in India, the Official Strongman Games in North Carolina and the USS Strongman Pro Women’s World Championships in Tennessee.

Because I’m a glutton for punishment, as well as running all these competitions I also build all of the equipment for them. This is for two reasons:

I’ll start with some of the stuff I made for last year, and as I knock stuff up for this year I’ll post it in here too

One of the events for last year was a frame carry. The only specs I had to go off was around a 450mm handle height (18" is a standard height for strongman) and 800mm width.

The material I choose to go with was UB (universal beams). The reasons I wanted to go with this is simple - it’s already very heavy, and it looks badass.

I don’t have many photos of picking the beams up, but long story short the demolition guy was VERY concerned I was going to be trying to pick them up

After getting given the absolute wrong weights for each piece, I spent a bunch of time with the oxy torch and managed to cut them down to a suitable weight - approx 78kg each. Here’s a shot of them with some handles welded on 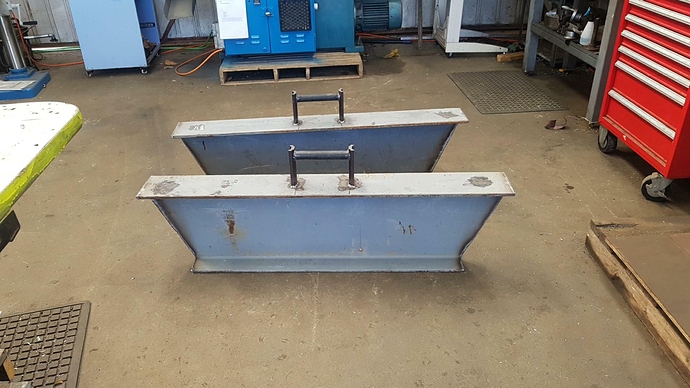 After that, with a great deal of difficulty and the help of @Svenska I got them up onto the mill table and drilled matching holes on each side, on to which I was able to bolt some cross bars: 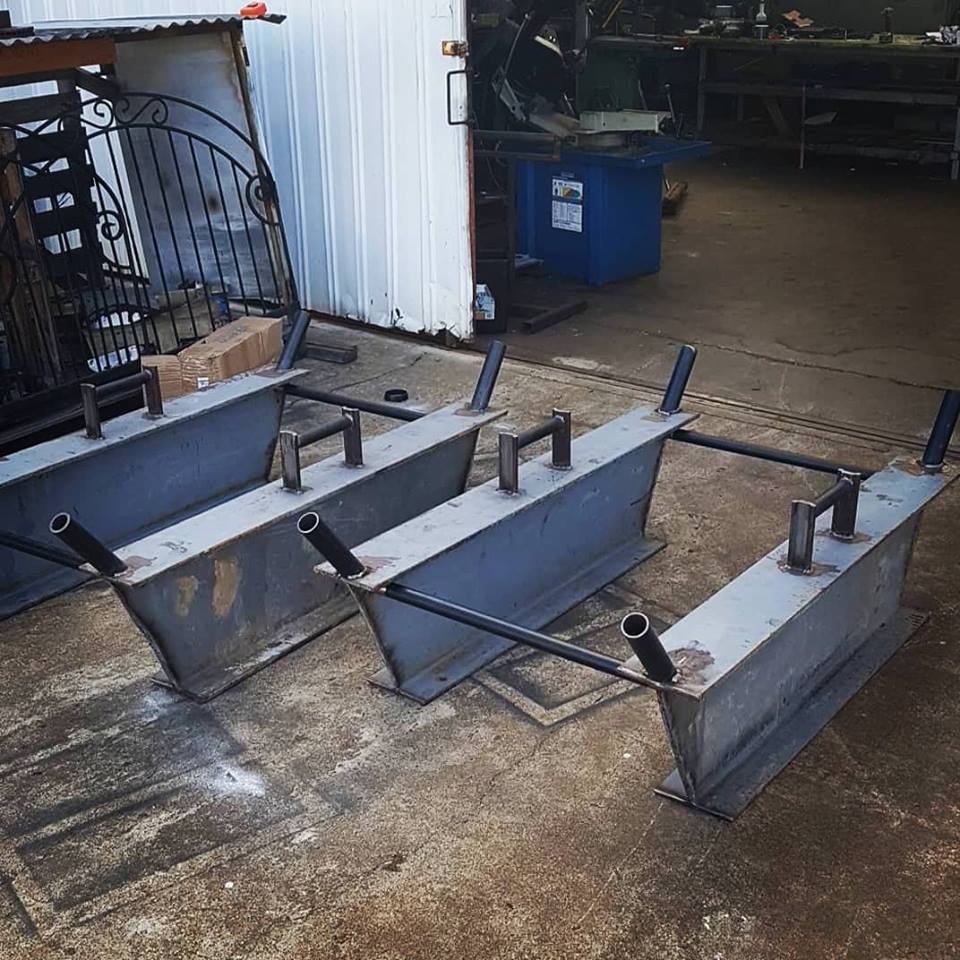 From there, it was only a quick hit with a grinder and a coat of rubber-based paint, and we got these:

It was a super rough event, with each unloaded frame being 160kg empty (which was used by our 62.5kg female competitors).

The next bit of equipment I built was a Hercules Hold. Although it’s only really got one purpose, this is a pretty impressive looking piece of kit and a fun event to do.

Here’s one I built prior, however it had a lot of issues: 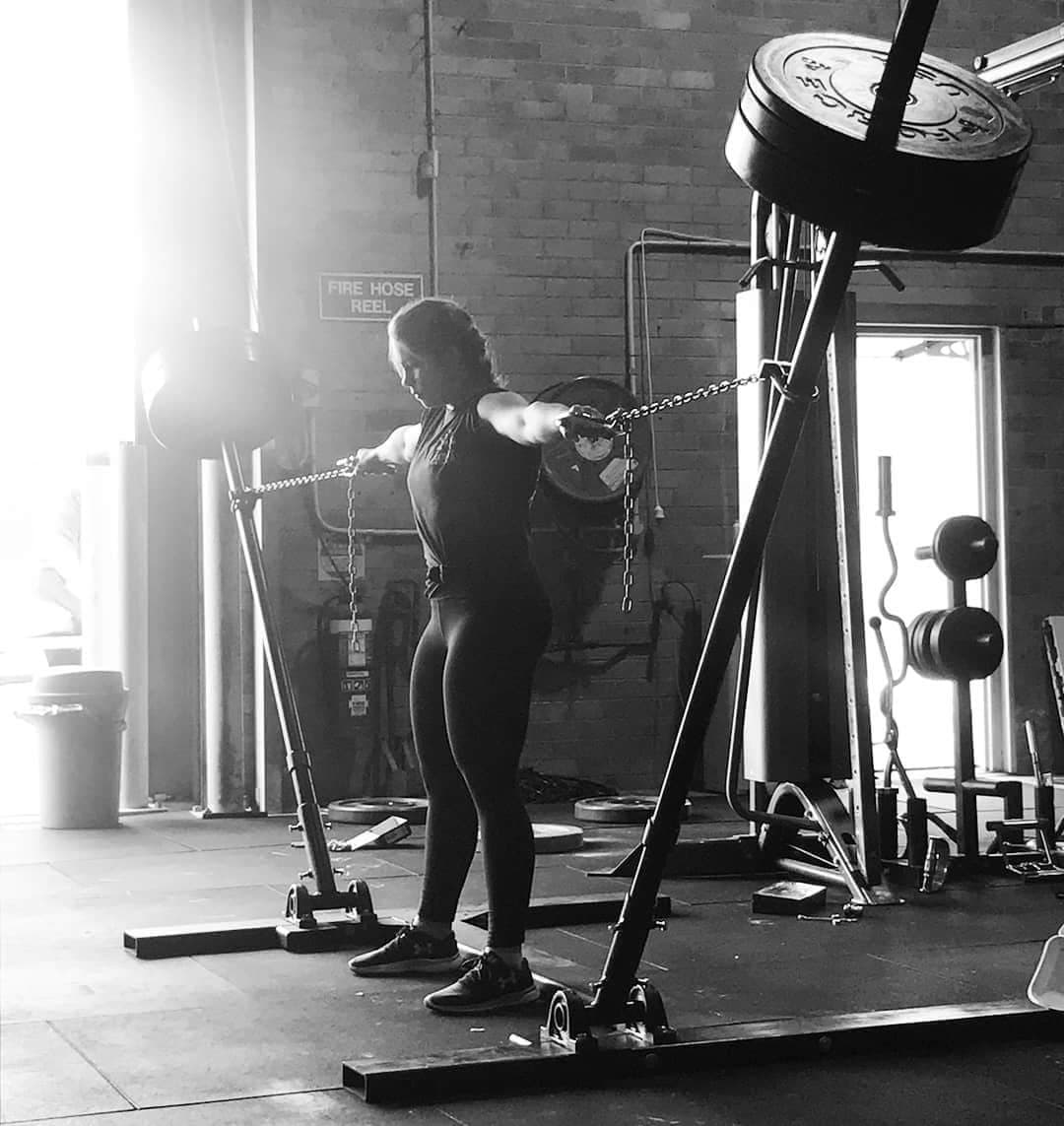 I didn’t really know how I was going to do the new design, but I know it would have to be big and impressive. I spent a couple of weeks in CAD trying to figure out measurements and angles, then did a bunch of modeling to ensure it was going to be strong enough. This is what I came up with: 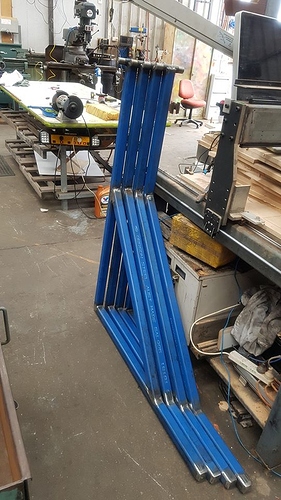 Basic 50x50x5mm SHS arms, a single brace and a turned stub on the bottom to sit inside some 1.25" bearings (freedom unit bearings are considerably cheaper than metric - go figure). The base was made from 150x50x3 SHS, and a bunch of braces needed to be added as I noticed it was flexing the attachment points over 10mm when the weights were dropped! 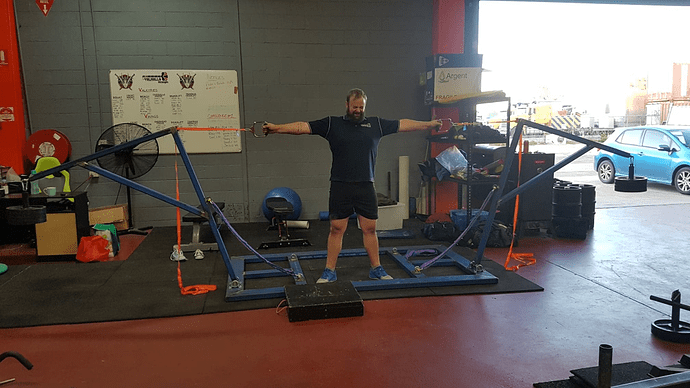 Due to leverage, 30kg loaded onto each pin ends up being well over 100kg in each hand. We needed a manner of ensuring that the arms were on the exact same angle for each competitor - a few degrees either way either adds or removes a significant amount of weight. This was the reasoning behind the ratchet straps originally. While this was working, I ended up breaking the welded ratchets straight off the frame the second time I used it, so I moved up to fully welded eye nuts on both sides.
As the frames can be adjusted so the arms are only dropped a very short distance when the competitor fails, we can reduce the amount of force on those eye nuts with the safety sling considerably - I am using 1 tonne rated eye bolts and slings, and the forces for a full weight have a smaller safety factor margin than I’d like.

After a quick coat of paint, this is what we ended up with: 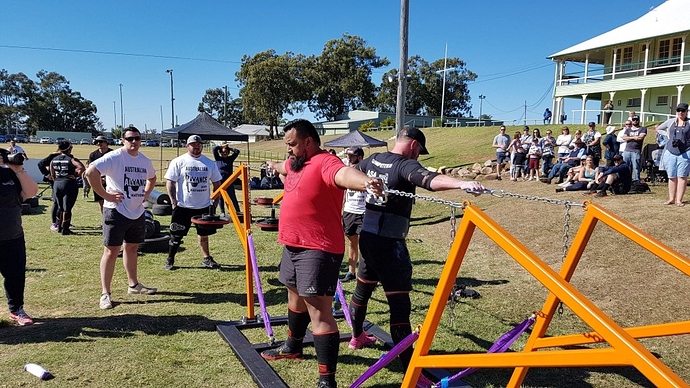 In the red we’ve got Australia’s Strongest Man Eddie Williams who is 6’4" and 190kg, backed up by a mate from Tasmania, who is 6’5" and 150kg. They make what is a ridiculously big frame look tiny

One of the events for Nationals this year is a car deadlift frame. I made one many years ago and it served its purpose, however it was probably a bit light duty for what I would be regularly using. I sold it for what the steel cost me, and have always wanted to build some big beefy ones. For Nationals this year I’ve got the opportunity to, so here we go. 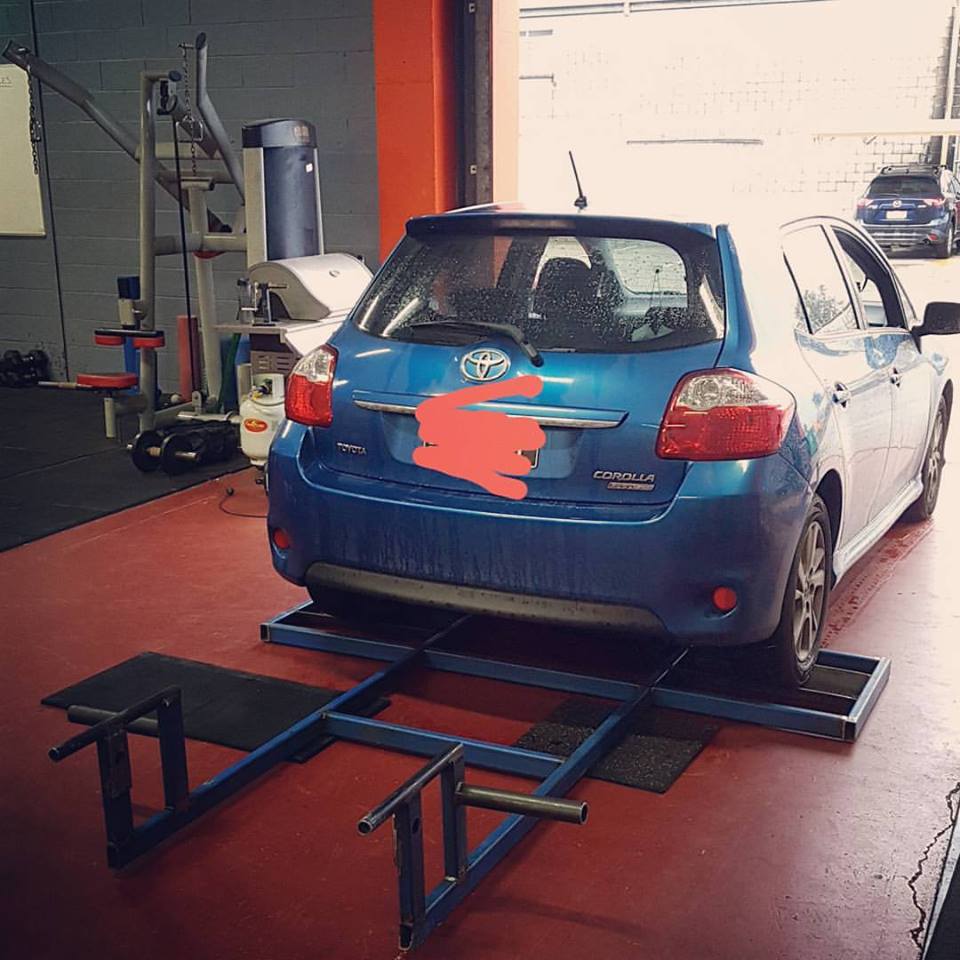 I’ve gone from 63x35x4 to 89x89x4, which is a pretty big improvement in stiffness. It will actually make it much harder to lift due to some funky mechanics around lifting weight off the ground, but it’s meant to be a pretty hard event anyway.

This is what I’ve got in Fusion: 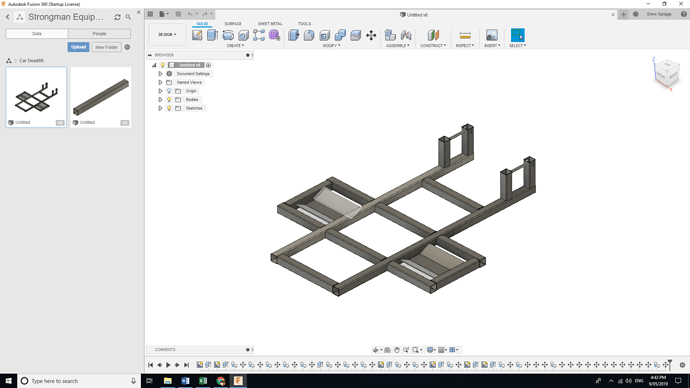 And this is what I’ve built so far:

We’re already pushing 150kg, with a whole bunch more steel to go in there. I’ll try and remember to update this as I finish more off.

Another thing I’ve been making a bunch of are strongman logs!

After starting with something like this - DN200, DN250 or DN300 pipe (depending on what size I am making) 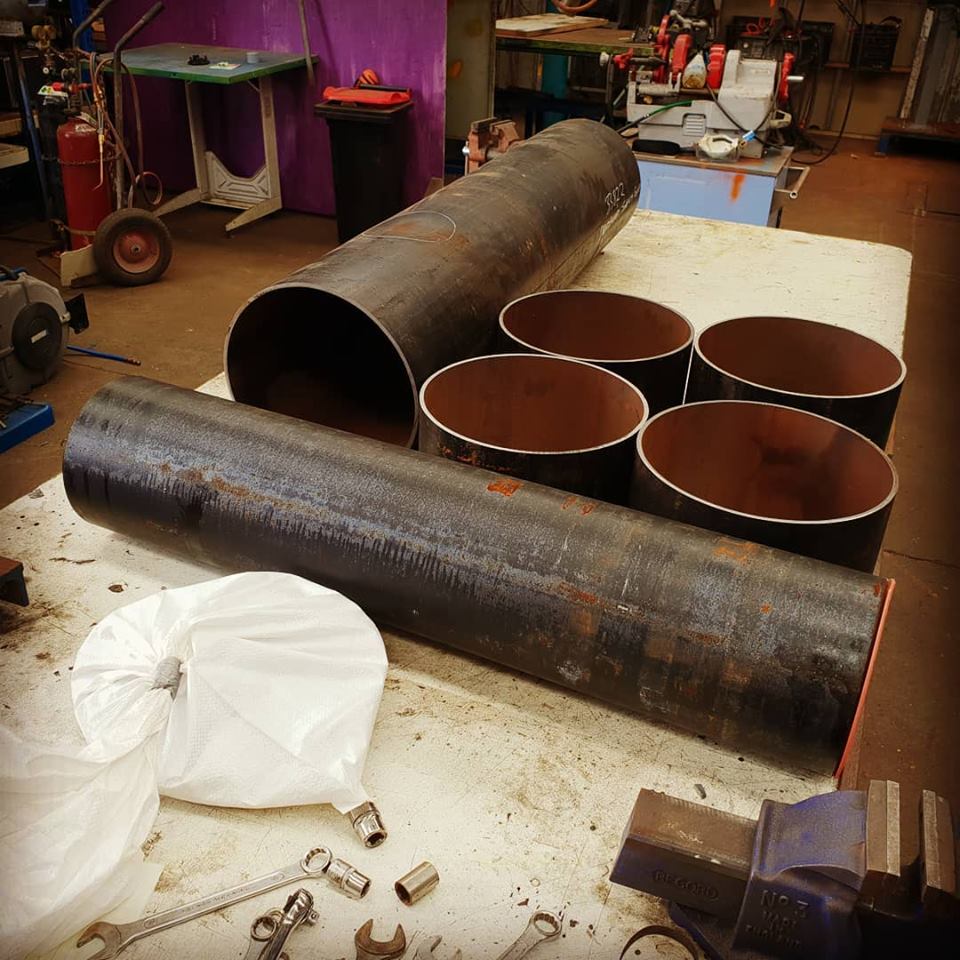 The cuts along the length of the pipe are easy, but the cuts around the circumference are much harder to freehand. I build a jig I can clamp down to the bench, and by setting up the plasma torch in the vice I can get cuts almost square to the end. 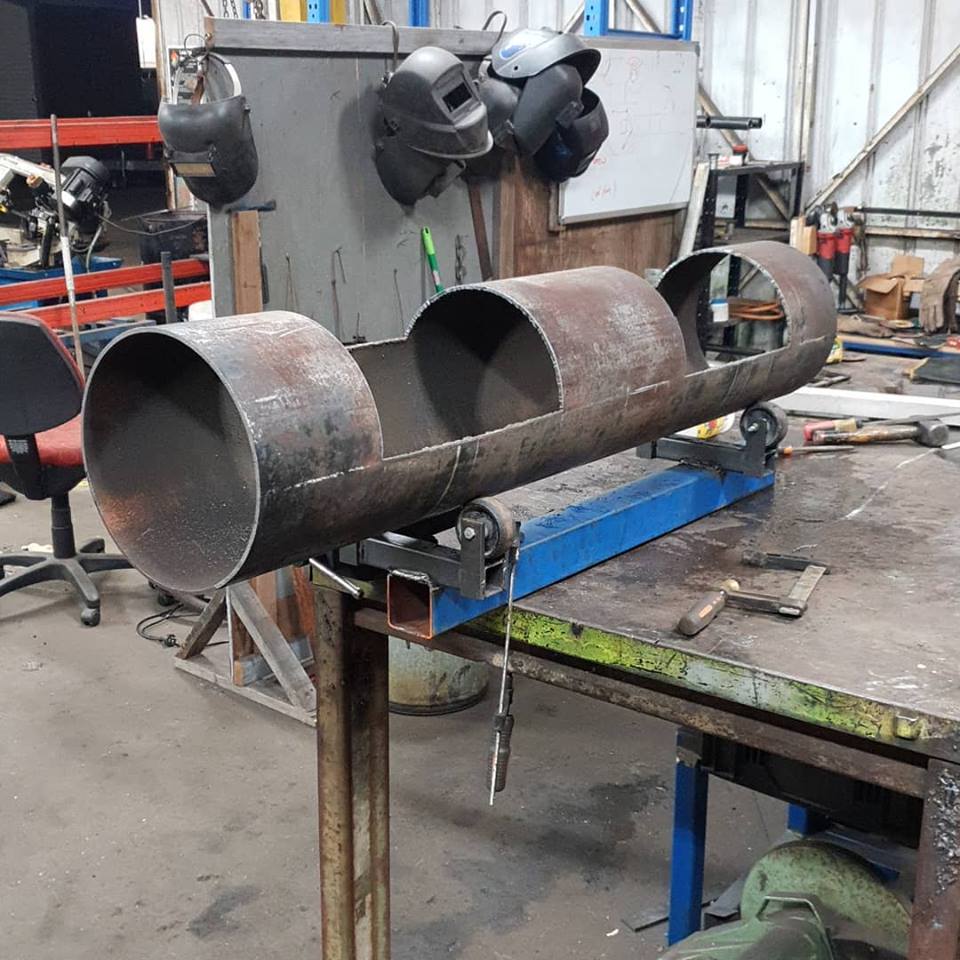 With the magical application of plasma cutter and about 3 hours of grinding, I get something like this: 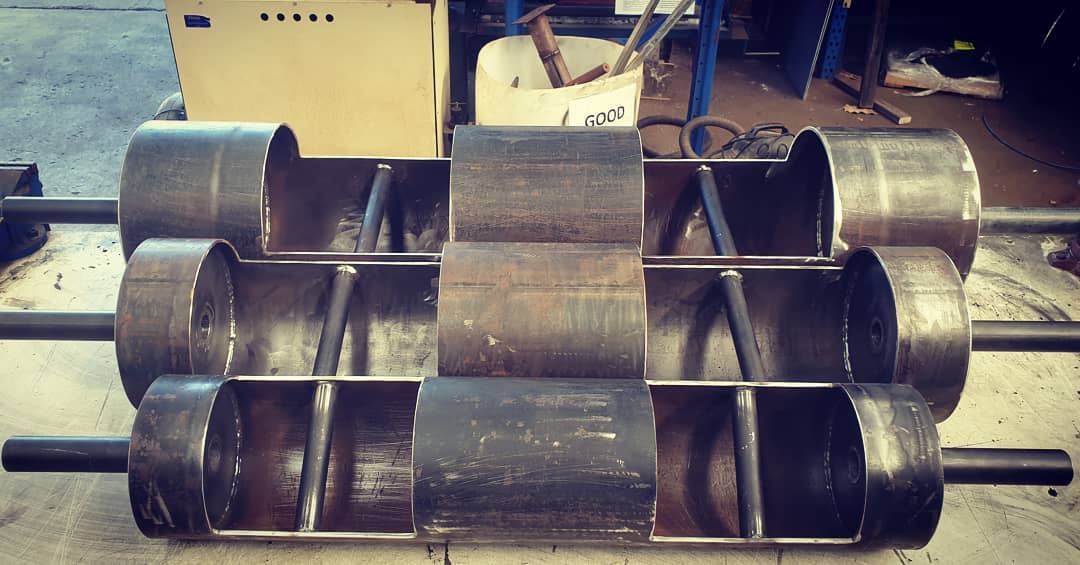 I’ve now got a set for the gym, but I’ve just found an older guy with some sort of mytical CNC pipe cutter, who has offered to sell me pipe cut and ready to go for half the price as I can currently buy pipe for. I’m going to get him to CNC cut ones for me (just so they’re neater), and keep giving these away as prizes at my comps.