Someone threw the gauntlet at my feet, the challenge has been accepted, and now it’s on like Donkey Kong. For the rest of the year (possibly longer), I won’t be wearing the same shirt twice to the space! This thread will be my own pictorial evidence & tracking system so I know what shirts I’ve already worn, to help me make sure I don’t double up.

My own personal rules:

To start with, an origami rabbit. The same design used in the video game To The Moon. I blame Daniel for not focusing correctly, but I blame myself even more for not checking the image after he had taken it. 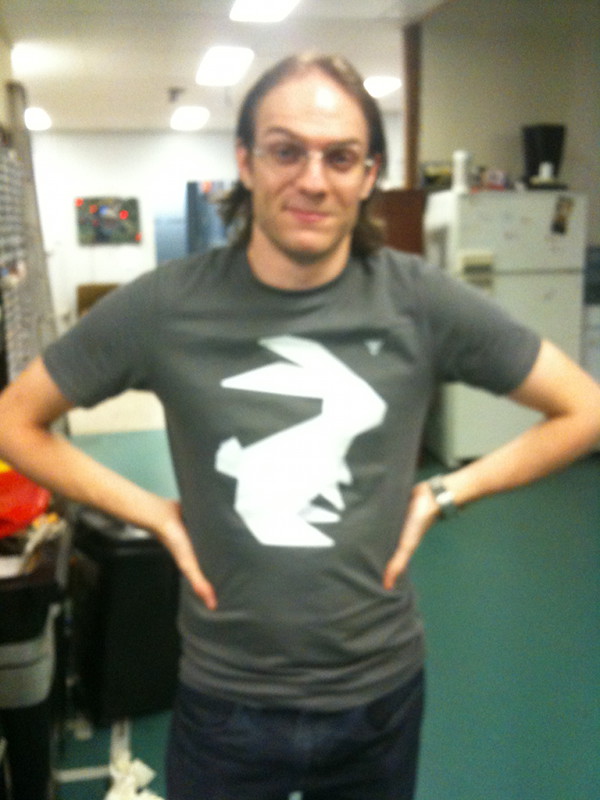 Let’s see if I can go the whole year.

I was so busy at the space today that I completely forgot to take a photo before I left. So this week will be a quick webcam snapshot at home. Let’s hope I remember to grab photos at the space more often! 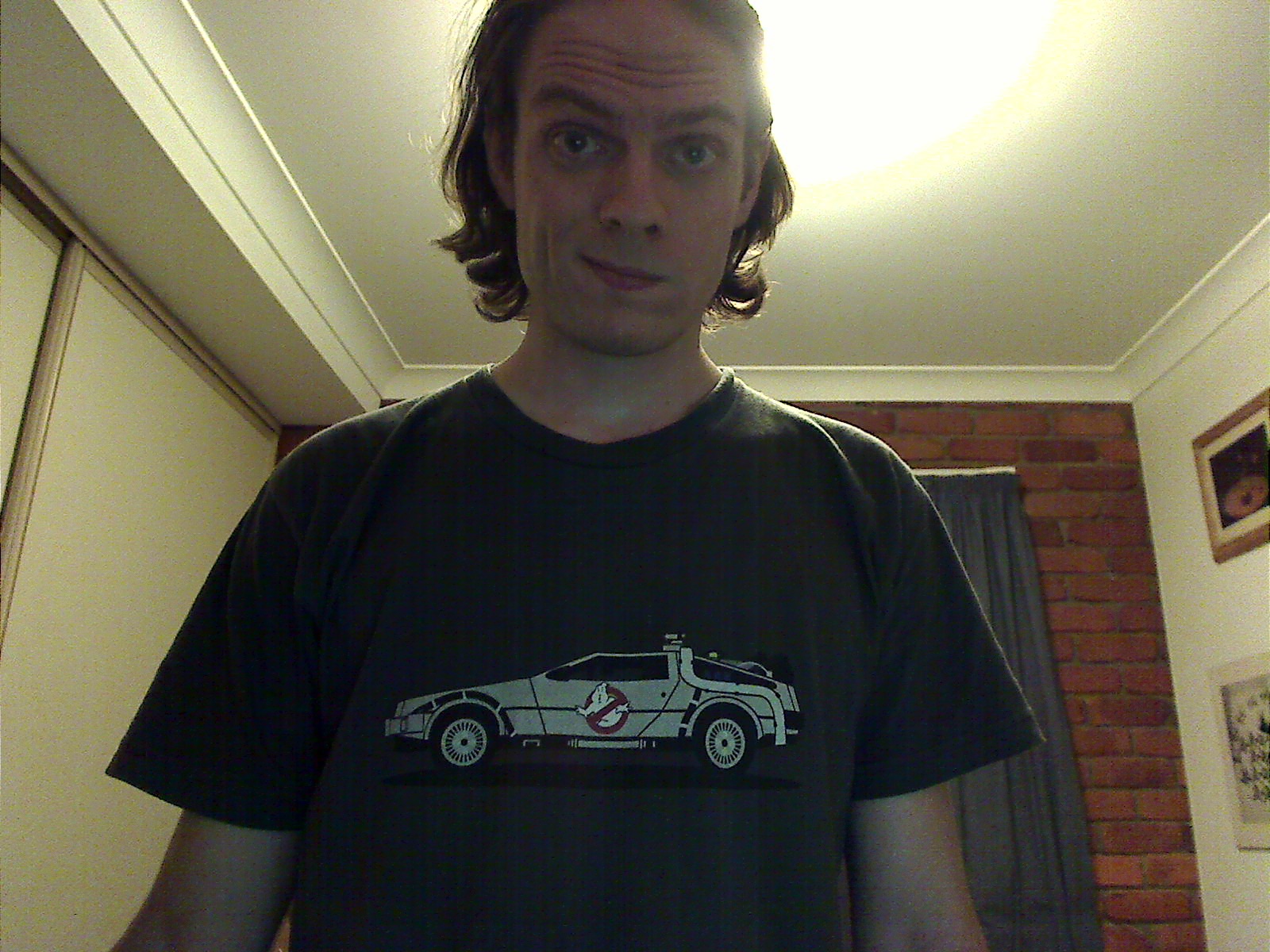 Harold Ramis, co-writer of Groundhog Day, the Ghostbusters movies & also played Dr Egon Spengler in Ghostbusters, passed away on Monday. As such, my choice of this week’s geek fandom was obvious. Having worn my Ghostbusters/Back to the Future crossover shirt already though, I had to settle for wearing one of my other Ghostbusters shirts. I wonder how many people can even have that experience. 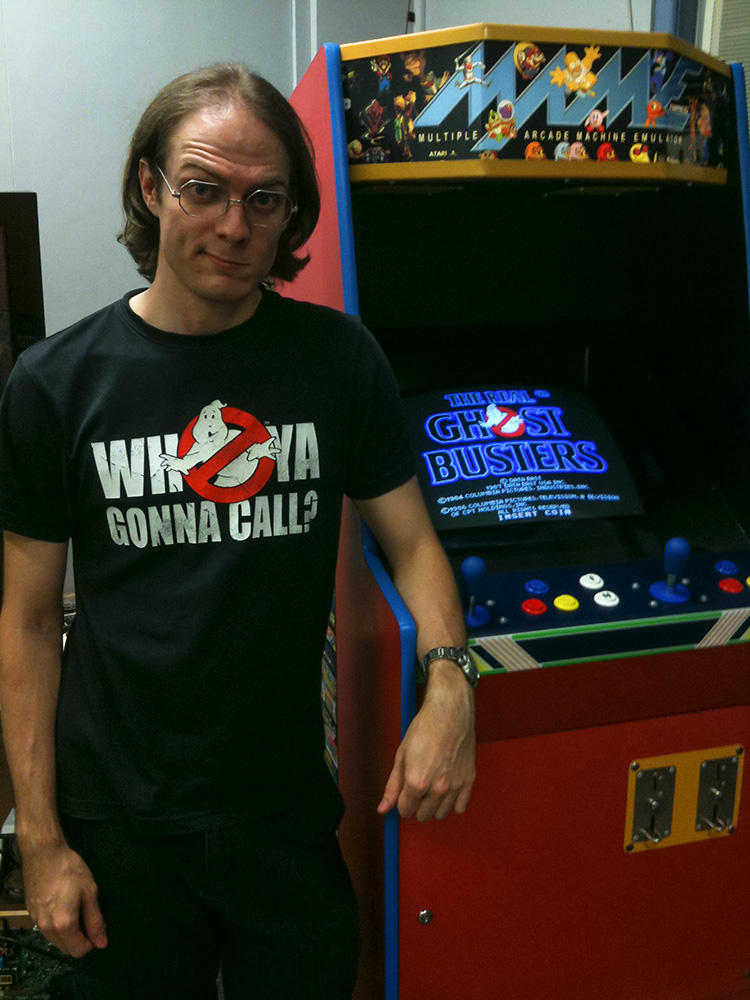 Also, full props to Lionel for finishing his MAME machine. It looks absolutely fantastic, it plays even better, and coincidentally it happened to have The Real Ghostbusters arcade game already on there! Photo = made.

Geek shirt of the Week number 4: 1.21 Gigawatts. Gullwing Gathering, a meeting of Aussie DeLorean owners, is on this weekend in Coffs Harbour. It’s Road Trip time!

This means I’ve gotta make sure my car’s in perfect mechanical condition for the drive, because it’ll be one of the longest, if not THE longest drives the car’s ever done in its life. It’s also why I’ve been working on my DeLorean at the space so much lately - there’s nothing seriously wrong enough that would stop me using it as a day-to-day car for normal distances, but I’d like it in perfect running condition before I take such a long trip. 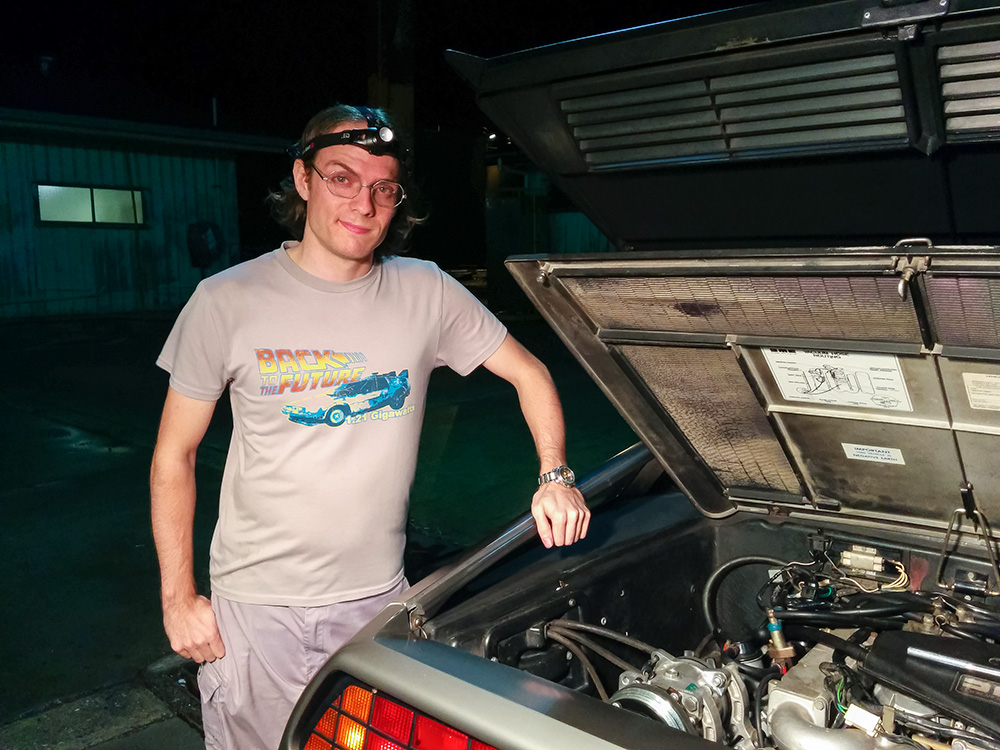 Also I don’t care how dorky they may look, head-torches are AWESOMELY handy things. Or not-handy, because they don’t need holding in your hands.

Week 5. Myst Island, from above the dock, in Sepia. For those who haven’t noticed, the Myst series of video games have been a HUGE influence on my life. I picked this one as my 5th shirt because of the importance of the number 5 in the games, and we have so many cool-looking pieces of equipment in the Science Lab making it a natural photo location. 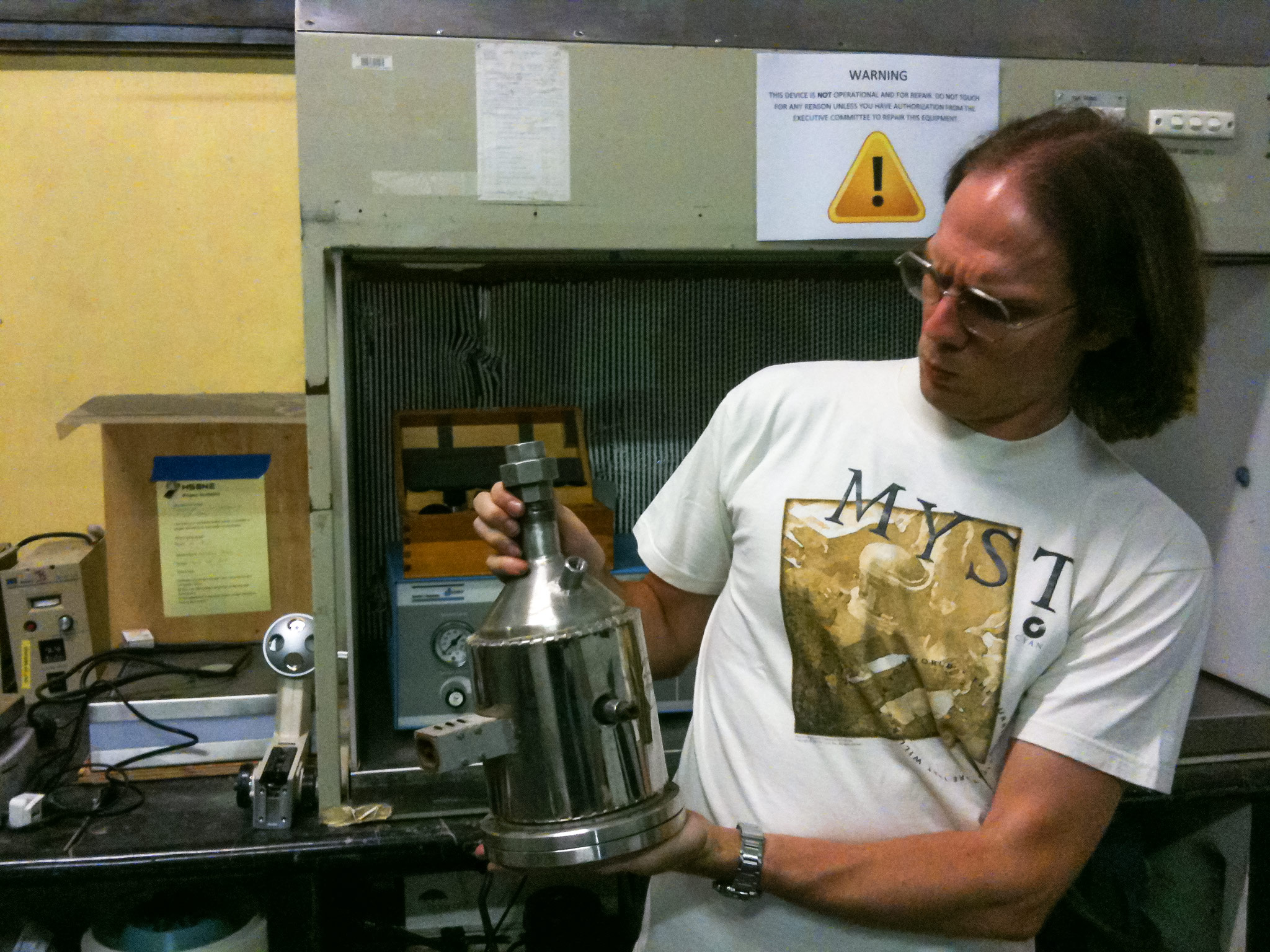 This shirt is © 1993, making it 21 years old. Consider that I’ll be wearing ten times the number of shirts so far. Myst shirts are my secret weapon & they’re why I’m confident I’ll make the challenge.

Number 6: The three versions of the clock tower from Back to the Future, from the three main timelines. This is actually my “entry” outfit I wore during Beauty & The Geek Australia - the main “geek” outfit I had to wear in photoshoots, interviews, publicity events & it’s the one you see me wearing a lot on the show. Next to me is Daniel’s infinity LED clock. 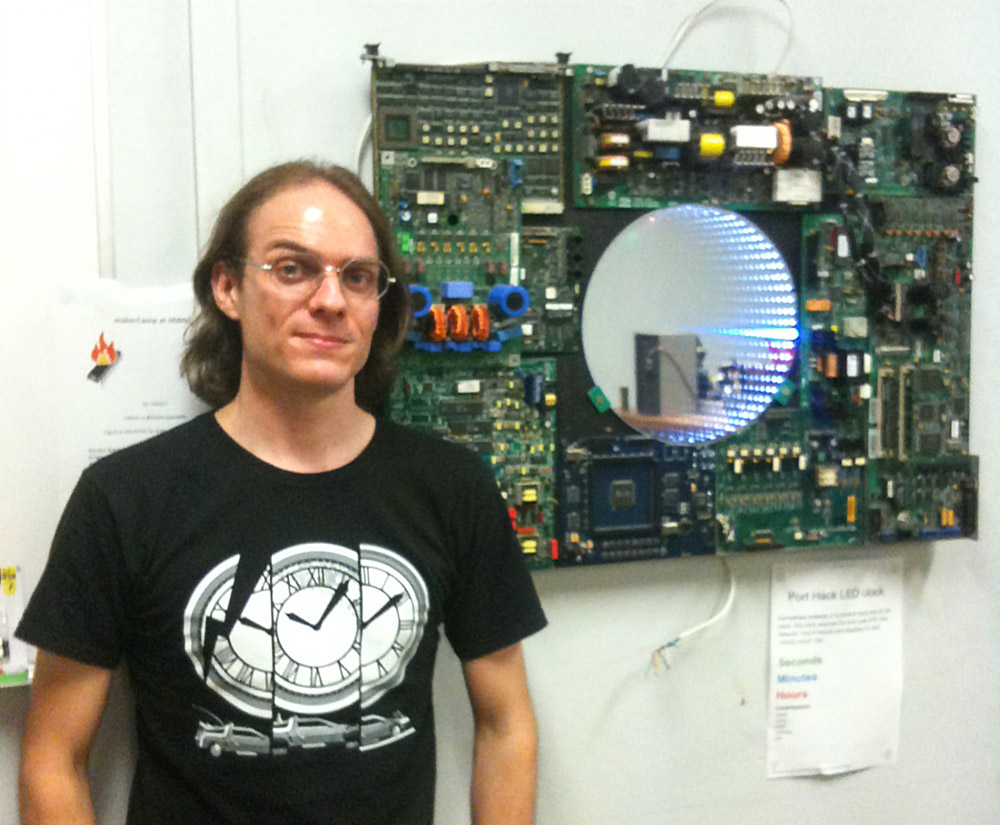 Speaking of, I’ve heard from the network that they’re preparing for season 6 of Beauty & The Geek Australia! I’ve been asked by Shine if I can recommend any beauties or geeks. I can’t guarantee anything, but I can say that recommendations from past contestants are considered higher than random applicants. Auditions aren’t even public yet, but if you’re interested, let me know & I’ll hook you up with a direct email address for Shine. No hints about where this season will be filmed but I can say that it’s not going to be in Fiji.

Number 7: BONUS ROUND! Josh ran a course at the Hackerspace on Wednesday, an Intro to GitHub. Josh never uses Windows, so I wore my MS-DOS shirt. Technically not Windows either. 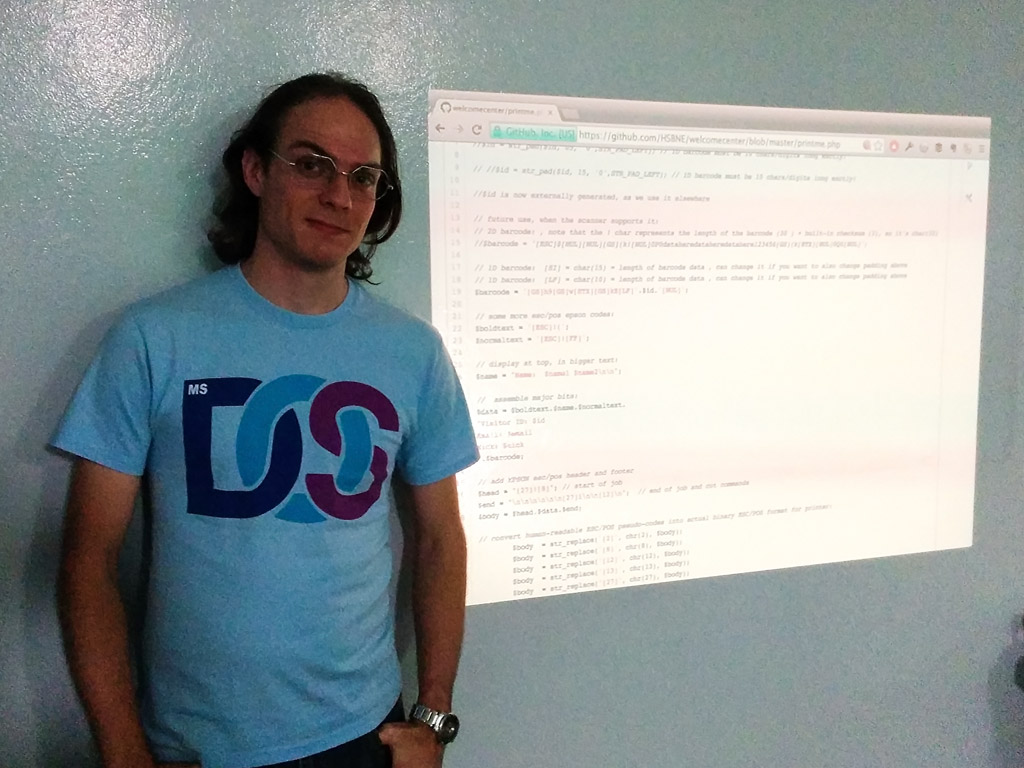 Number 8: a shirt featuring Skeletor saying Myaah! while I’m riding a Segway with a dog. Your argument is invalid.

He-Man may be the master of the universe but Skeletor can tell you hey, what’s going on. Yeah, yeah, yeah. 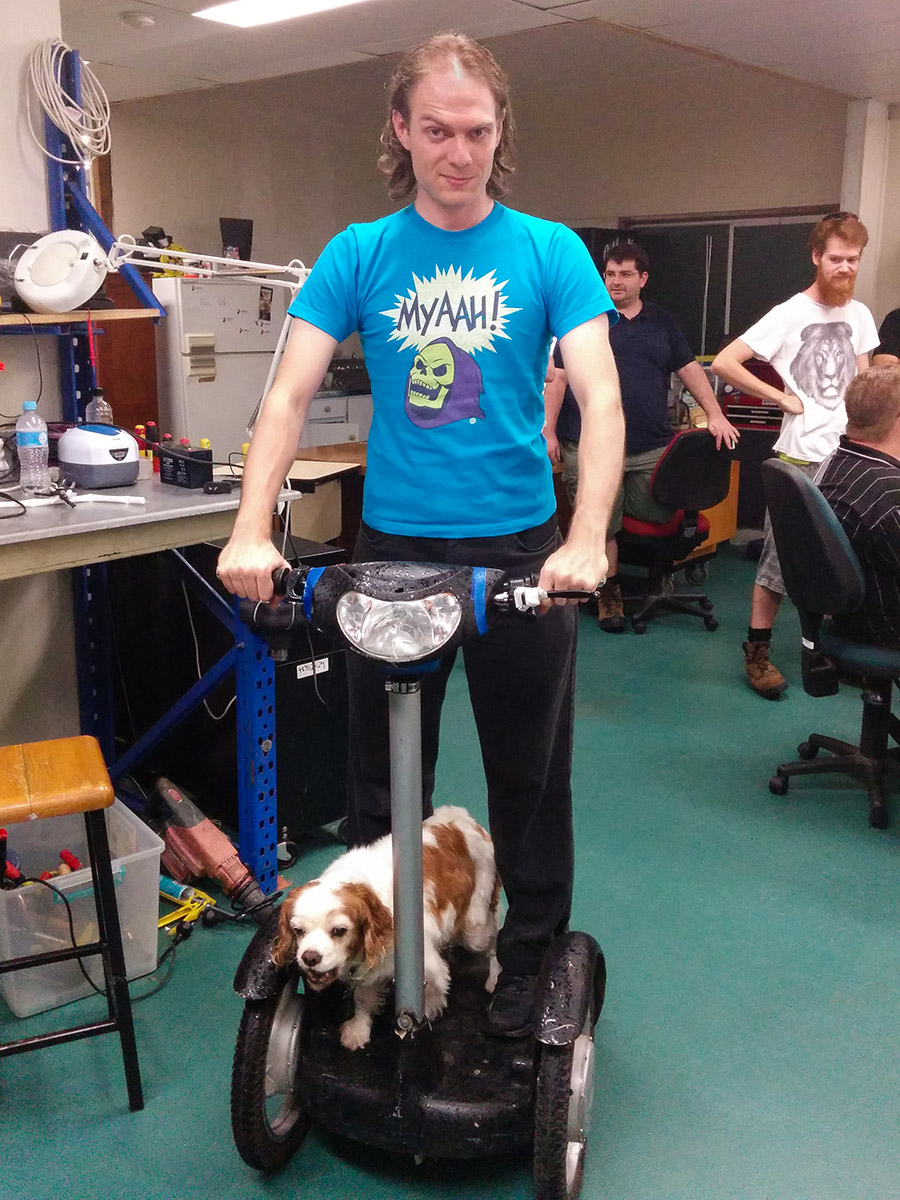 Some members have already heard the sad news… on Saturday, my DeLorean was involved in an accident. Another driver merged on top of me without looking, resulting in two damaged Stainless Steel body panels. Those panels aren’t particularly rare so it’s all fixable. If only I had an actual hover conversion on my DeLorean… Thus this week’s shirt advertising Wilson’s Hover Conversion Systems, while sitting in Buzz’s Gyrocopter. I can’t believe Buzz actually made this thing himself. And it flies, too! 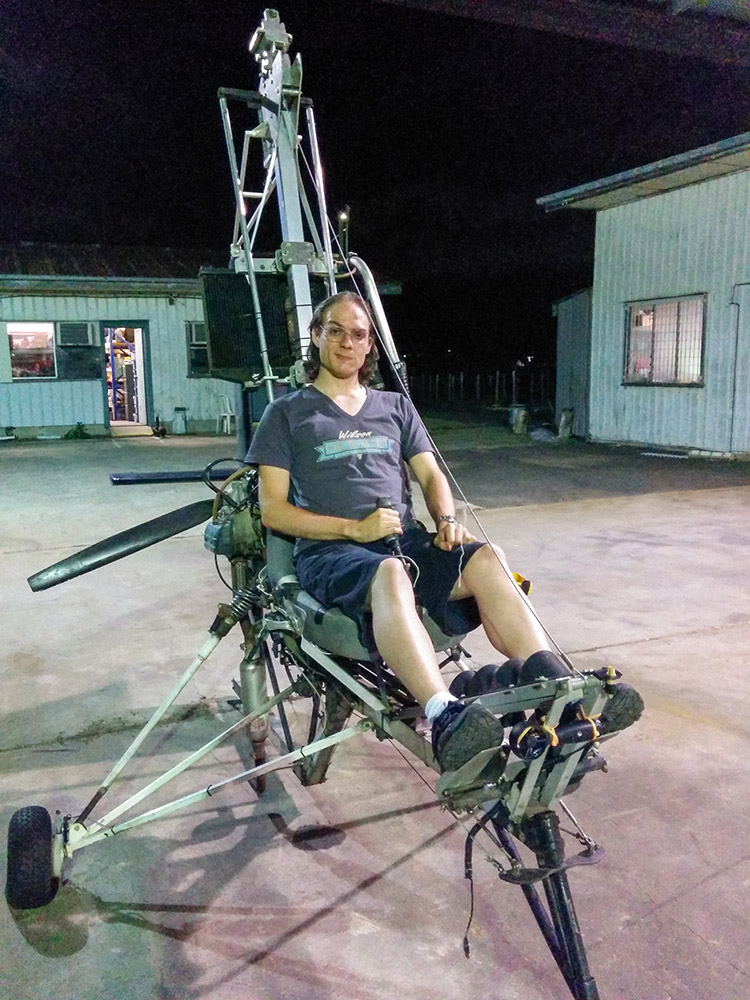 Geek shirt 10! It’s with a heavy heart that today we say goodbye to Windows XP as Microsoft issued its final security patches. Like XP, this week’s shirt is very well-worn, sporting a few blemishes, multiple holes & I normally only use it when I’m doing something dirty. But a special occasion needs the right shirt.

If you think a 13-year-old operating system is still “good enough”, I’d like to point out XP was originally coded without support for USB2.0, before the first iPod was released, when the Nintendo 64 was the current Nintendo console, before Friendster was around, when the main method share a file was via 3.5" floppy. It isn’t designed for modern computing the same way VHS isn’t designed for modern TVs (which, by the way, was still the dominant video format for years after XP’s release). 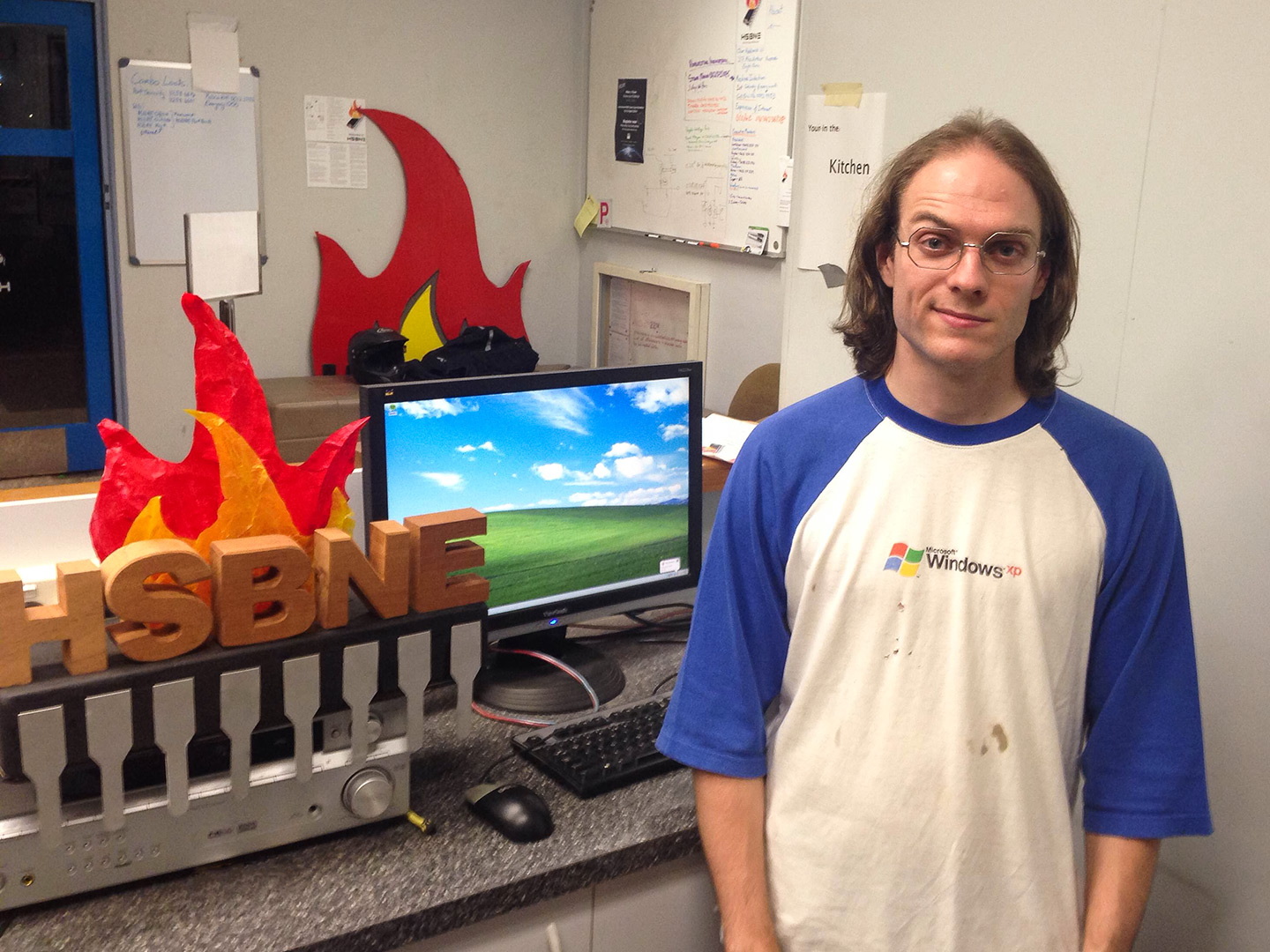 And yet, the lobby computer at the hackerspace still runs XP because at this point it almost blends in with the NES & the Atari in the games room. It may be technically insecure but given the difficulty we have making this computer connect to the internet through our routers & firewalls, if someone manages to hack this system then they deserve access.

By great coincidence, there was a Total Lunar Eclipse right as our Tuesday open night started this week, so this week’s photo is me focusing my brass & leather telescope before checking out the moon, with Mars as the sole bright star in the photo! 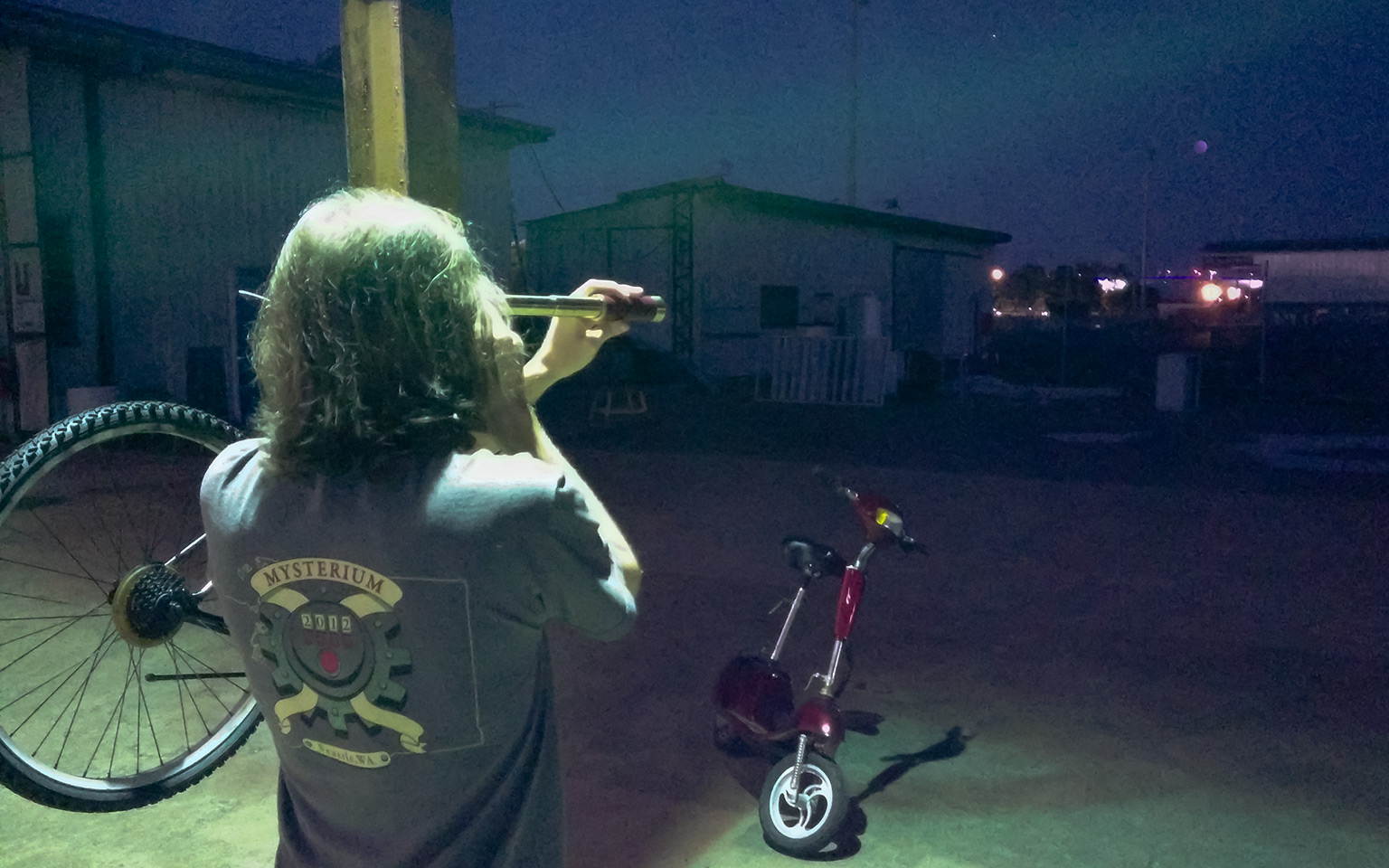 Geek Shirt #11 is from Mysterium 2012, the annual gaming convention of Myst video game fans. Yes there’s enough of us for our own convention. This was also where I officially unveiled my replica Myst linking book. It was considered by Wired Magazine to be one of the most accurate video game replicas they’d ever seen (I tracked down a copy of the same 137-year-old book they scanned as a texture reference, the cover was embossed with hand-made stamping dyes & filled with 24kt gold paint & the computer inside is fast enough to run Half-Life 2 at 30fps+). It’s accurate enough that when Cyan Worlds released a HD 3D remake a few months ago, they used scans of my book instead of their original worn-out copy - making it no longer a replica Myst book, but now the Myst book. You can see it in the opening credits for realMyst: Masterpiece Edition. You have no idea what that meant to me.

Blair’s electric scooter’s in the foreground, because that’s where he left it. Blair often leaves electricity lying around, sometimes outside scooters. So, I don’t know, you might want to wear a hat.

Geek Shirt #12. A dozen different shirts! I’m not even a quarter of the way through yet.

Don’t make me go Zelda on you, with icons from the NES version of The Legend of Zelda. @LuminousElement wore a Zelda shirt too. I almost went Zelda on him.

One of my projects, an LED panel lightbulb, is sitting on the electronics bench between us too (1600 lumens, man it’s bright) 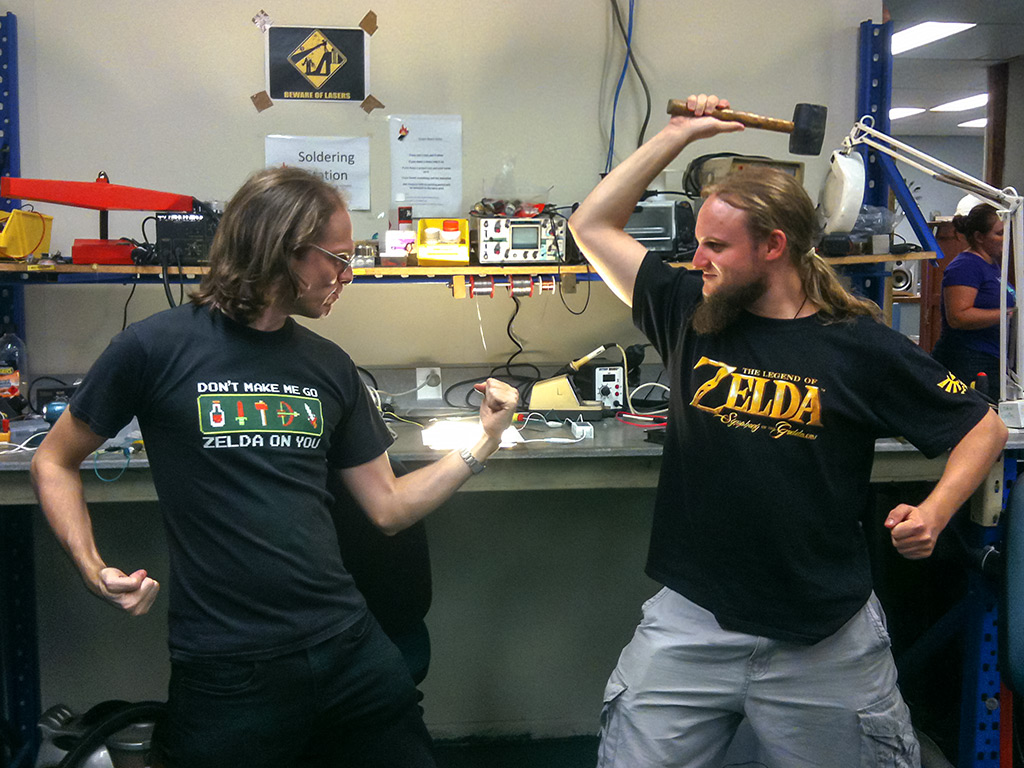 Geek shirt #13: a depiction of a Type 40 TARDIS control console from Doctor Who, specifically the design used by the 5th, 6th & 7th doctors (who were all really nice when I had lunch with them last year). 13 shirts, 13 lives of a Time Lord - there’s method to my madness. What’s more, this shirt is only available from the Doctor Who Experience gift shop in Cardiff, UK - because sometimes I’m so geeky with my shirts I’m almost hipster.

We have a new laser cutter at the space, yaaay! It cuts & engraves things. I’m getting sick of normal faces so this one is silly. 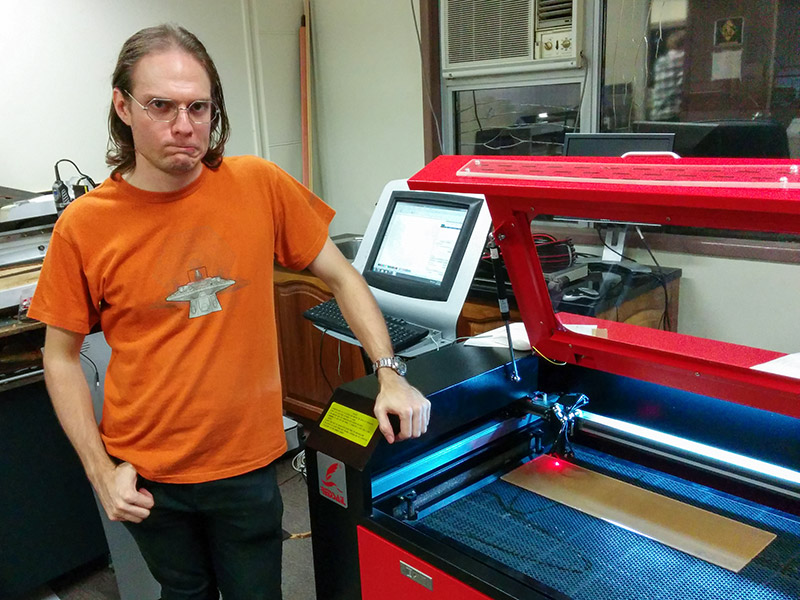 Geek Shirt 14: a classic scene from Day of the Tentacle, one of the best 90s Lucasarts adventure games. “I feel like I could… take on the world!” Fits my mad scientist persona pretty well. 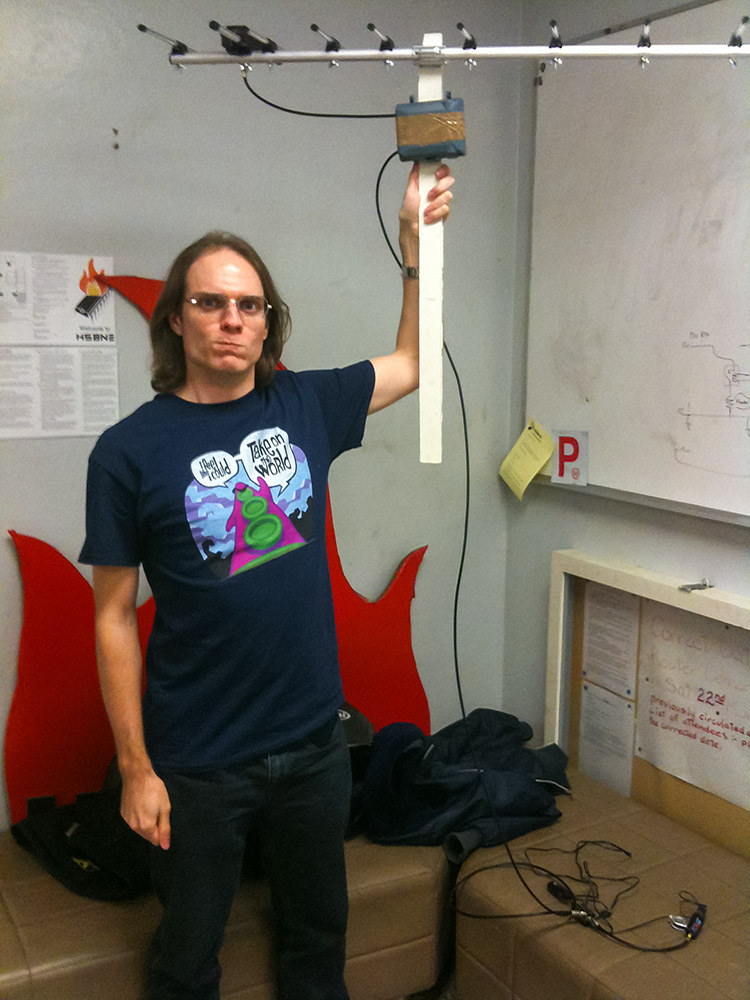 The thing I’m holding is my ground station receiver I built for picking up satellites. This picks up a 1-watt radio travelling at 7.5km/s from 600km away. And it’s held together with scrap wood & no-name-brand packing tape. Yes really. Science & Maths is awesome.

Photo taken after my satellite signal receiving demonstration with my own camera. I know lots of other people took photos during that event but I didn’t take any because I was too busy trying to receive signals, people should totally post them on here for everyone to see!

Geek shirt 15: Mysterium 2009, designed by the incredibly-more-talented-than-I Claire Hummel. Spot the Myst references in this shirt - they’re all throughout the ink blot!

It’s been a while since I uploaded a new photo. That’s because the person who originally took this shot fell ill & I couldn’t get a copy, so I re-created this photo today. I’ve still been wearing new geeky shirts & I’ll post the rest later this week.

We have a laser. We get silly. We can use it to cut and engrave our own windows. We make no apologies. 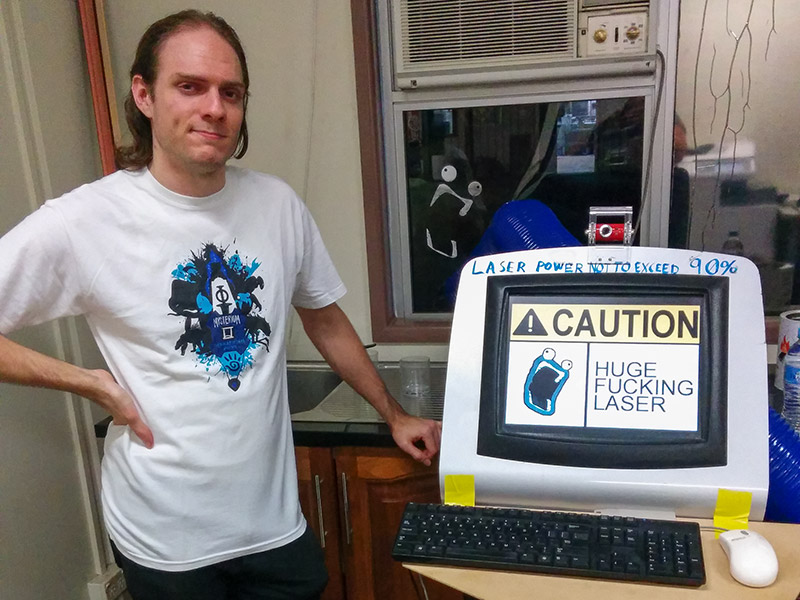 Geek Shirt 16: Back to the TARDIS. Because a shirt referencing only one time travel show isn’t enough references. 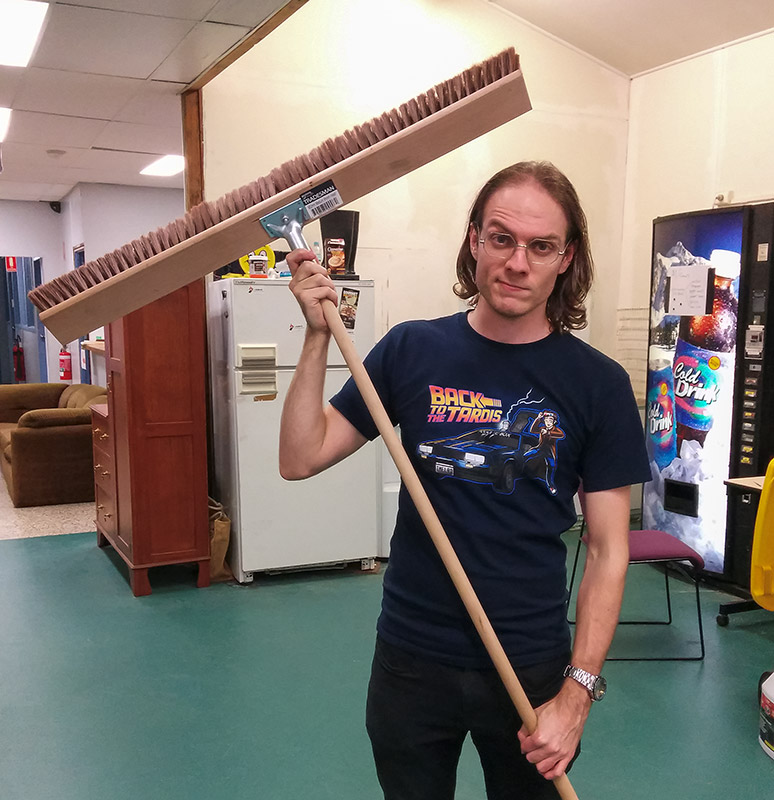 I’ve acquired a gigantic new broom for the space to help encourage cleanliness. Sweeping is now so much quicker!

I’ve been using this to sweep up the huge quantities of broken glass, rusty nails & metal filings in our quad. This should prevent any more flat tyres.

Geek Shirt 17: CERN. Birthplace of web browsers, the World Wide Web, plus the Large Hadron Collider. Which accelerate particles at speeds so fast they stop measuring by km/s & instead count how many electron-Volts of momentum they have, so they can smash them together & look at the pretty explosions. I picked up this shirt at their gift shop a few years ago, when I managed to organise a private behind-the-scenes tour of the LHC.

I also did a show & tell of my electric vehicle this week, explaining how they work & offering rides/torque demonstrations for donations. I raised a decent amount too! 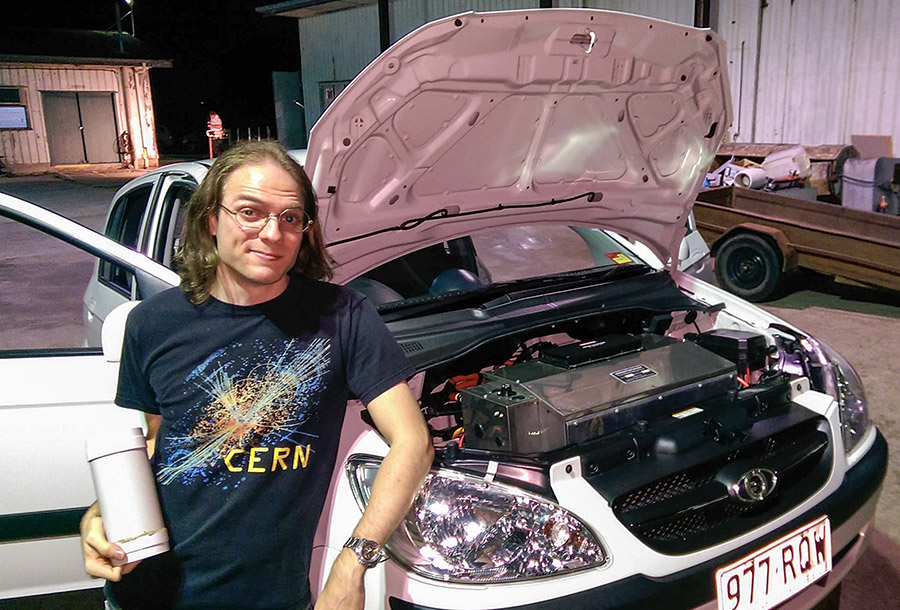 Geek Shirt 18: Nintendo. While I play the original Duck Hunt on an actual NES with an old CRT. The Hackerspace has some cool retro gaming systems.

I’m now officially a third of the way through this challenge. I think I’m gonna start wearing some of my “different” (but still geeky) shirts. 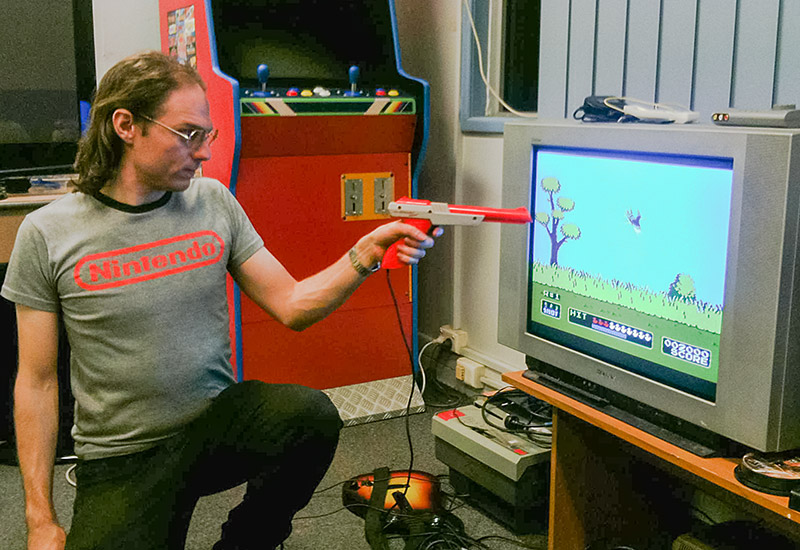