Geek shirt #48 - * “a plain white shirt? wtf that’s not geeky!” * you say. Thanks to tropical Cyclone Marcia we had buckets of rain here, plus I’m pouring a cup of water on my shirt… But my shirt’s completely dry as the water just bounces off. This is one of my superhydrophobic, superoleophobic shirts. They literally and physically cannot get wet because water just doesn’t stick to them, yet they feel just like any ordinary cotton shirt. 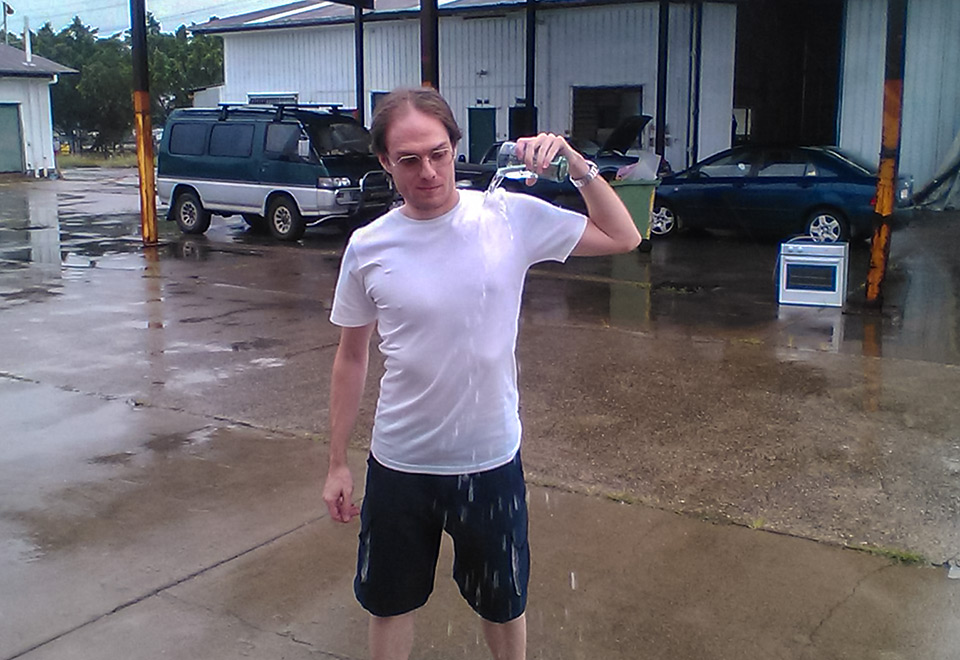 Geek shirt #49 - A Link to the Future. Legend of Zelda: Majora’s Mask was just released for the 3DS! I drove my DeLorean to the space for the relaunch party! Yes I own that many geeky shirts I can do crossovers that specific. 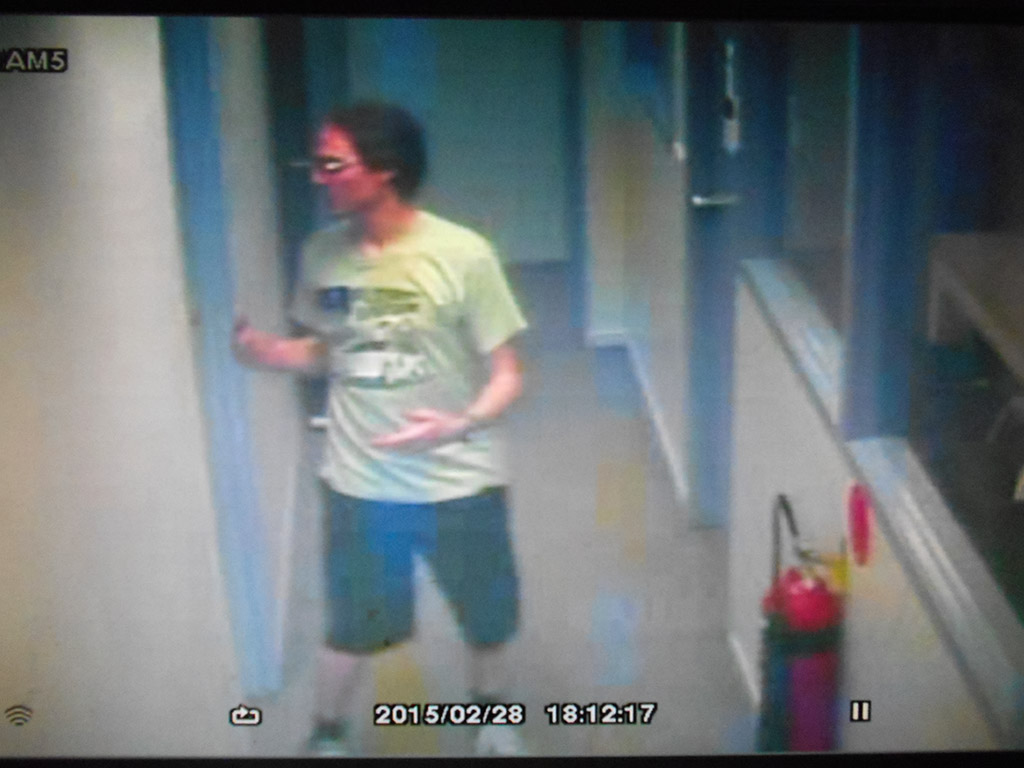 With all the effort of preparing for then enjoying HSBNE’s relaunch party, somehow I forgot to take a shirt photo! So here’s a screengrab from our security cameras, courtesy of Wizard @Thermoelectric. Unfortunately you can’t see my ultra-cool name badge which was a tiny screen showing my name & trippy animation videos all night long. But just pretend it was the coolest name badge you’ve ever seen and that’s about right.

Geek shirt #50: Myst. Fifty geeky shirts is an achievement worthy of a classic, one of the very first Myst shirts Cyan knocked out over 20 years ago. What with 5 being an important number in the games and all that. 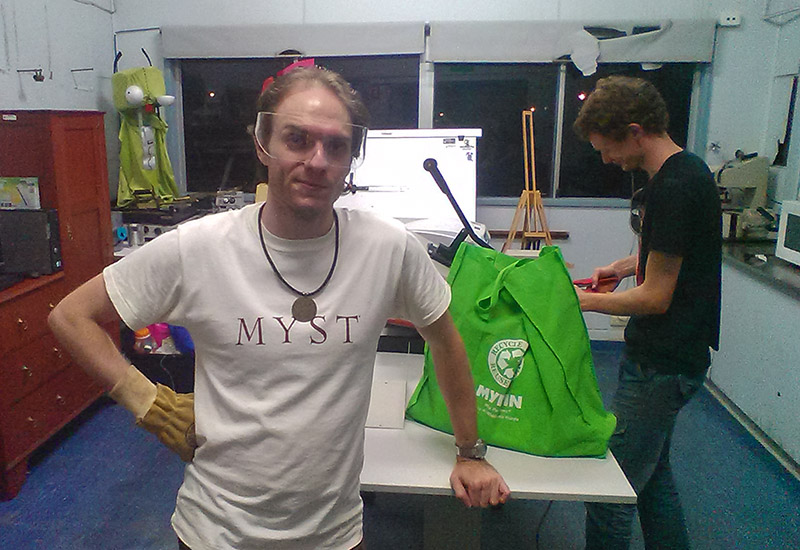 I’m in the Creatatorium this week, building some artsy stuff. I cut the shield/glasses on my face on our laser cutter out of scrap Acrylic, heated them up in a toaster oven then bent them to shape. A lot more work was done on them after this photo was taken; they’re only ~40% complete here and not even the final shape. And yes that is a Gir costume in the background.

Geek shirt #51: On the weekend I presented a talk at Barcamp 2015 Gold Coast. I’ve been on my powdered meal replacements for 8 months now, I thought I should share what I’ve learned. However for doing this, I acquired another shirt. Ugh. 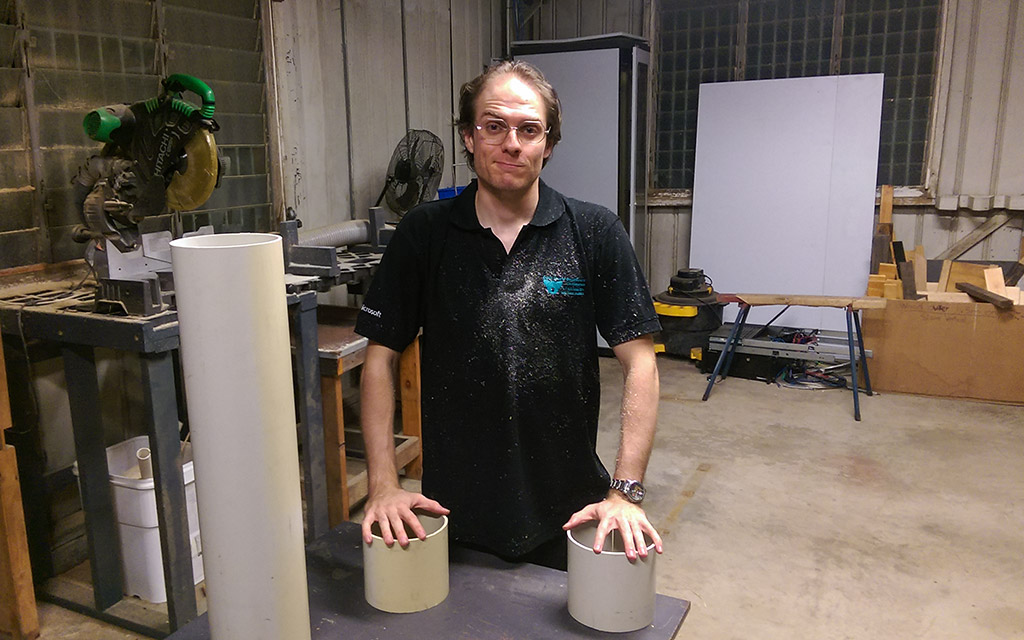 …Maybe wearing a black shirt while cutting PVC pipe wasn’t the smartest idea. But hey, I needed some moulds and now I’ve got them.

! CHALLENGE COMPLETE! I’ve made it a full calendar year.

Maybe now people will believe me when I say I have too many geeky shirts. 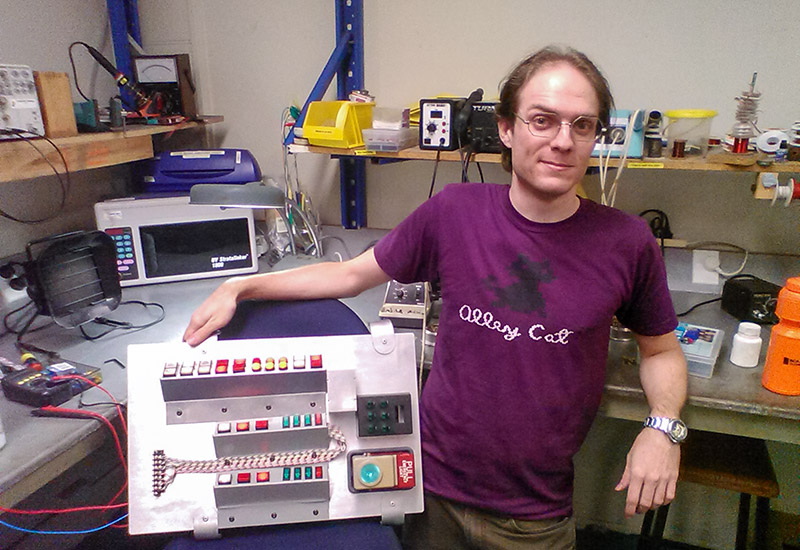 If you recognise this shirt, you’re instantly awesome. Alley Cat is one of my favourite games, released for IBM PC-DOS 2.0 in 1984. And because it was coded properly, the original 56,448-byte game still runs these days on the latest versions of 32-bit Windows (!). If that’s not good enough for you, you can actually play it for free in your browser. Oh yeah, and this week I finished the roof box console for a DeLorean Time Machine conversion.

I may have done my full year of geeky shirts, but I’m not done yet… time to start the bonus round.

First person at the space who recognises some of my upcoming obscure ones gets a free drink! 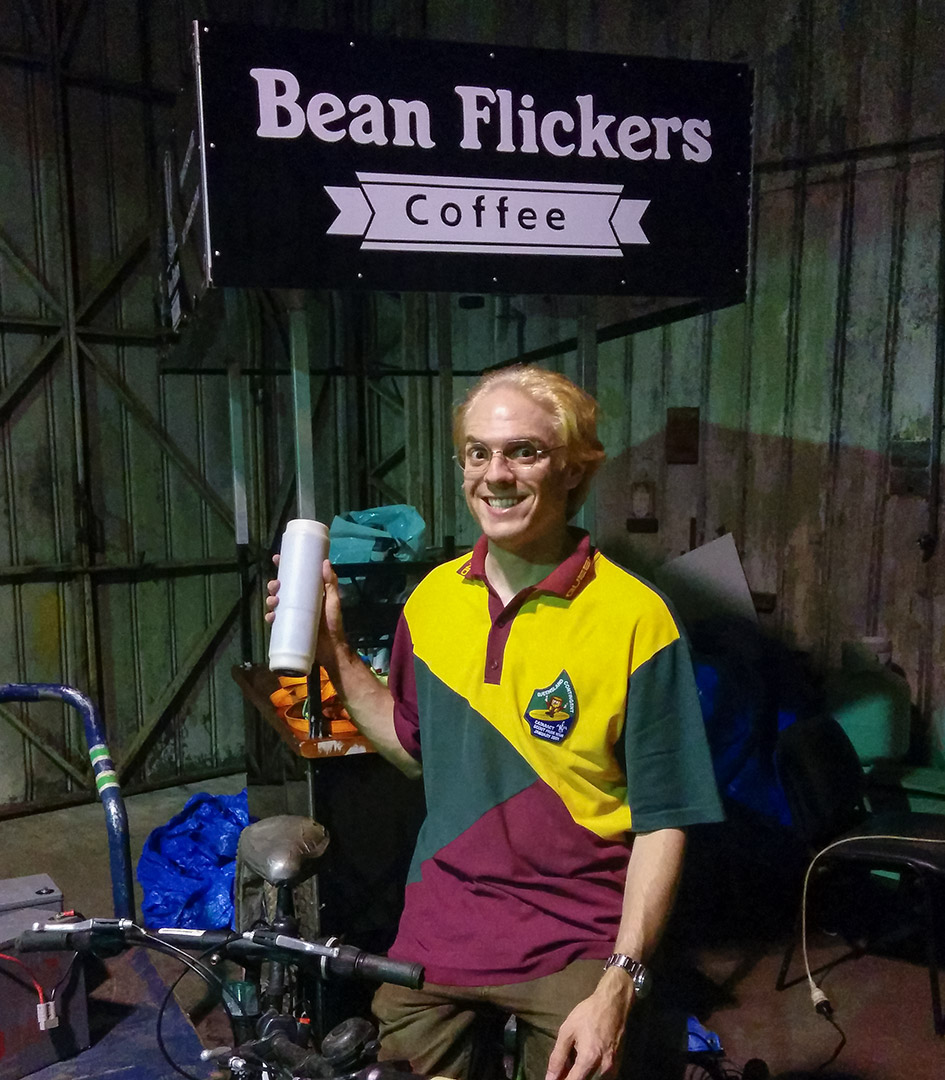 One of our members, @Bean_flickers, has built a coffee cart at the space from scratch for his own business! Solar panel on the roof, electric motor in the bottom, it serves up delicious hand-made brew. You might see him around Brisbane selling coffees. You can create crazy stuff at HSBNE.

In my hand is the old water filter that I changed because the old one was pretty grody. Given how dirty it looked inside, I wouldn’t be surprised if the last time it was changed was when people still used the word “grody”.

Geek Shirt #54: another one of my superhydrophobic shirts that cannot get dirty or wet, this one a branded SILIC shirt! Yes you could argue it’s similar to a past shirt I wore, but this is a different compound on the fabric by a different manufacturer & a different colour, plus most importantly not many people at HSBNE saw my shirt last time because I wore it on a Saturday. 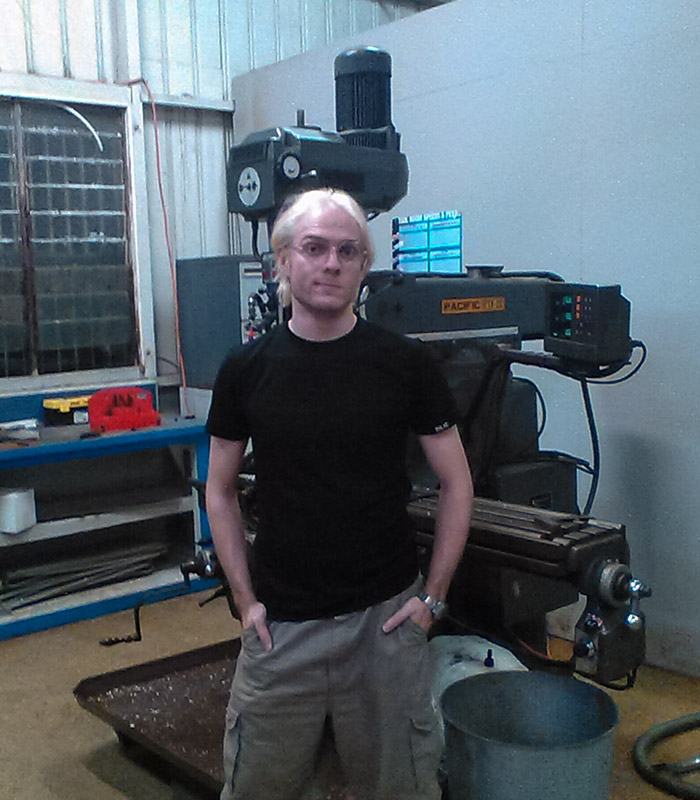 6974f365580d6766.jpg700×800
Somehow I went 52 weeks without taking a single photo in the machine shop. This is our gigantic mill. So many degrees of freedom, I’ve been told it has the capability and the accuracy to mill a whole model RC engine block.

Also yes, my hair is a little lighter than usual… I’ll be at Supanova Gold Coast on Saturday, come say hi! Booth #1, highlight L on the map, by the DeLorean I’ve been working on.

Geek shirt #55 - an exact replica of Doc Brown’s 2015 train shirt from the movie Back to the Future. I wore this outfit to Supanova Gold Coast 2015, and Christopher Lloyd joked he could sue me for copying his likeness so well! The glasses were also something I made at the hackerspace and you can actually see through them. They’re the first pair Christopher Lloyd’s seen that he could actually see through that still looked like solid metal from the outside. It’s a really impressive trick. 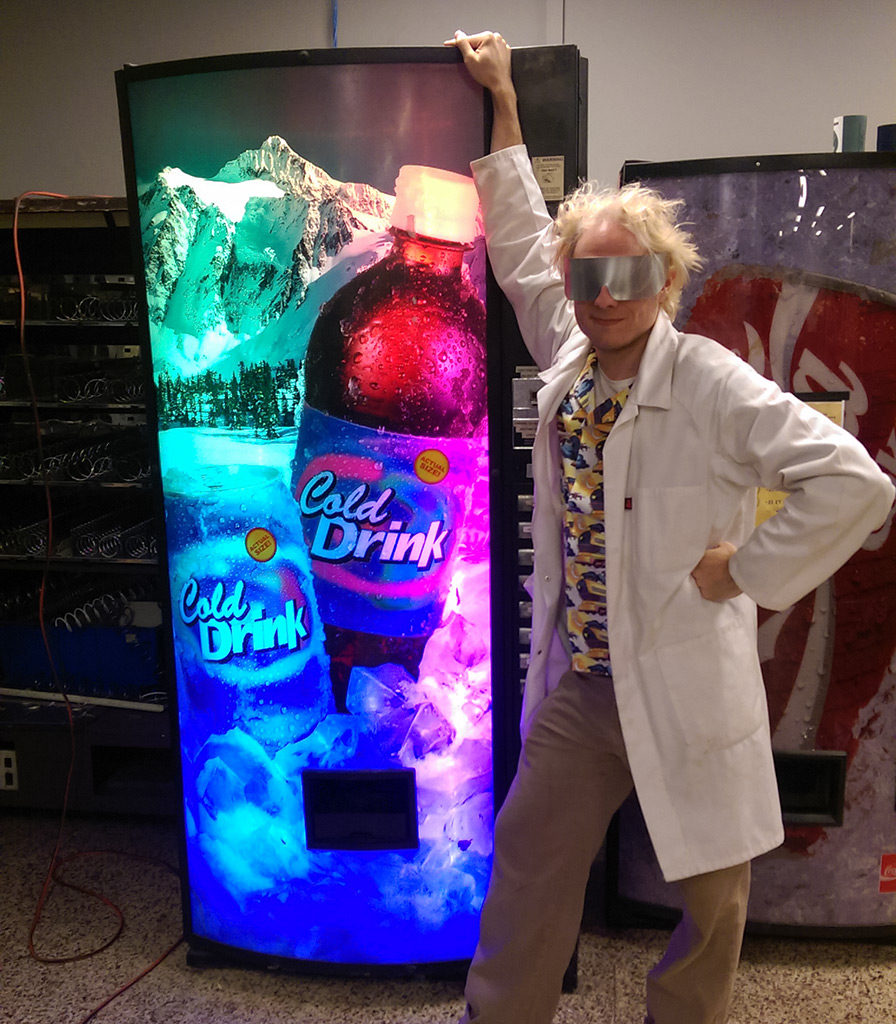 I’ve been working on the vending machine lately, adding more lights and cool features - it can get pretty crazy at times.

Also yes I did bleach my hair just for this cosplay, it’s not a wig.

Geek shirt #56: Myst III EXILE, a promotional shirt for the third Myst game, only available to those who preordered the game back in the day. 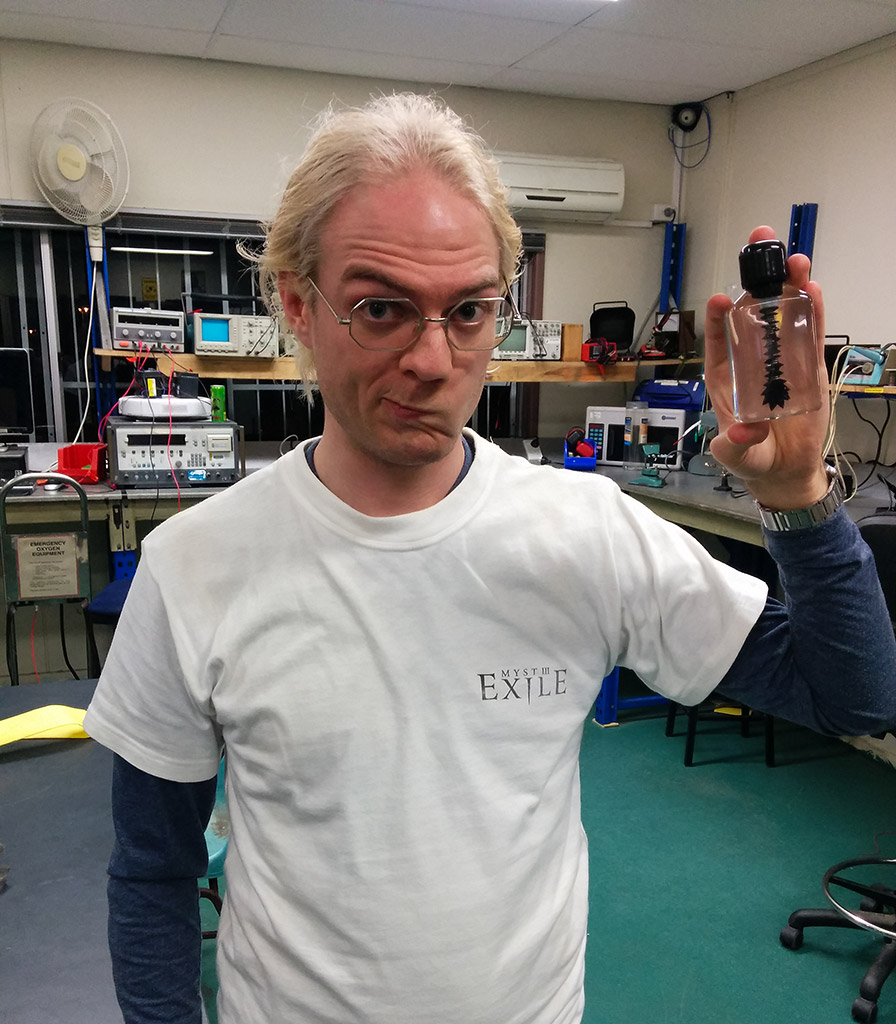 In my hand is a vial of magnetic liquid, aka Ferrofluid. It’s really trippy stuff and forms all sorts of weird spiky shapes when magnets are nearby.

Geek shirt #57: A DeLorean flying through two portals in space, from the video game Portal. No this isn’t the same as geek shirt #36, I just have two shirts with very similar designs! 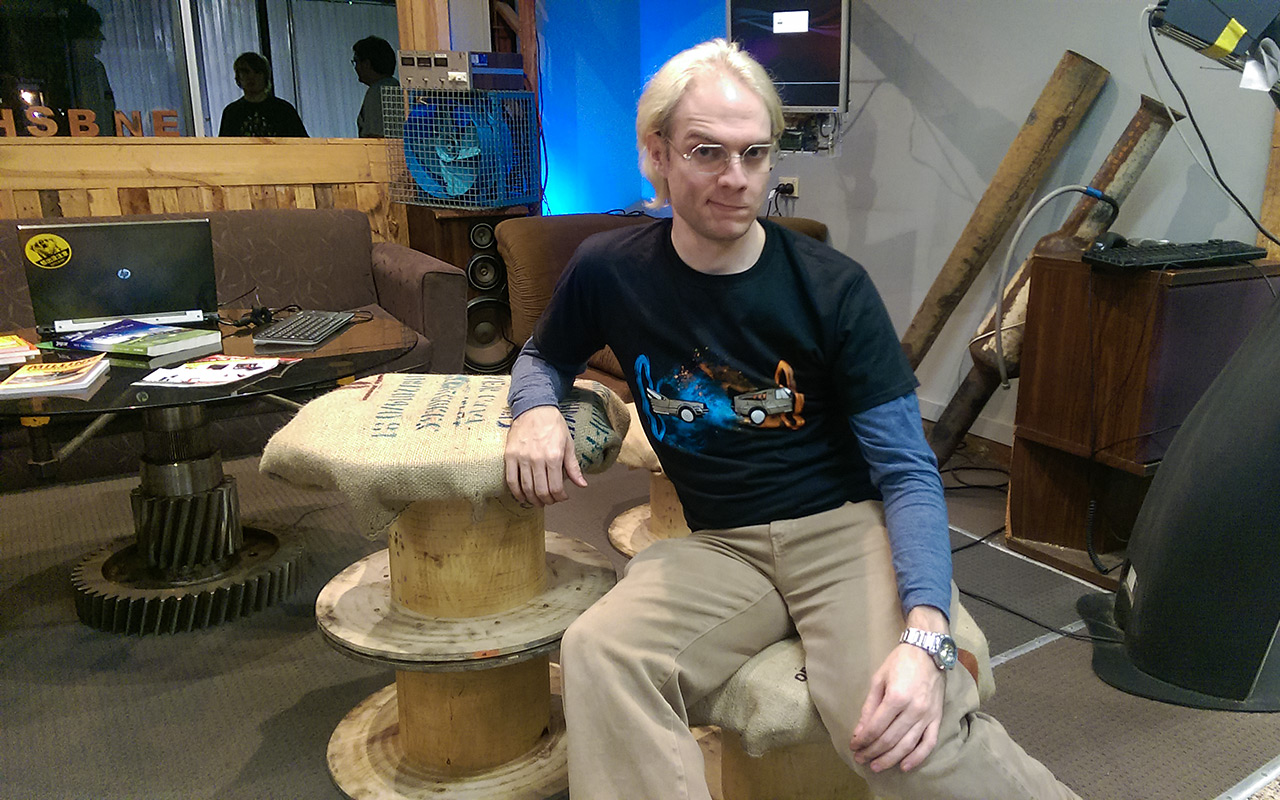 @Hally built some really cool chairs for our hangout lounge. They’re made out of old cable spools, recycled foam blocks and hessian bags. And pay no attention to the pulse jet sitting behind me.

Geek shirt #58: “I found the Treasure of Mêlée Island™ and all I got was this stupid T-shirt”. You may think this means I’m disappointed to own this shirt, but at least it’s better than a shirt saying “I beat the Sword Master”. If you don’t get this reference then you really need to play Monkey Island. 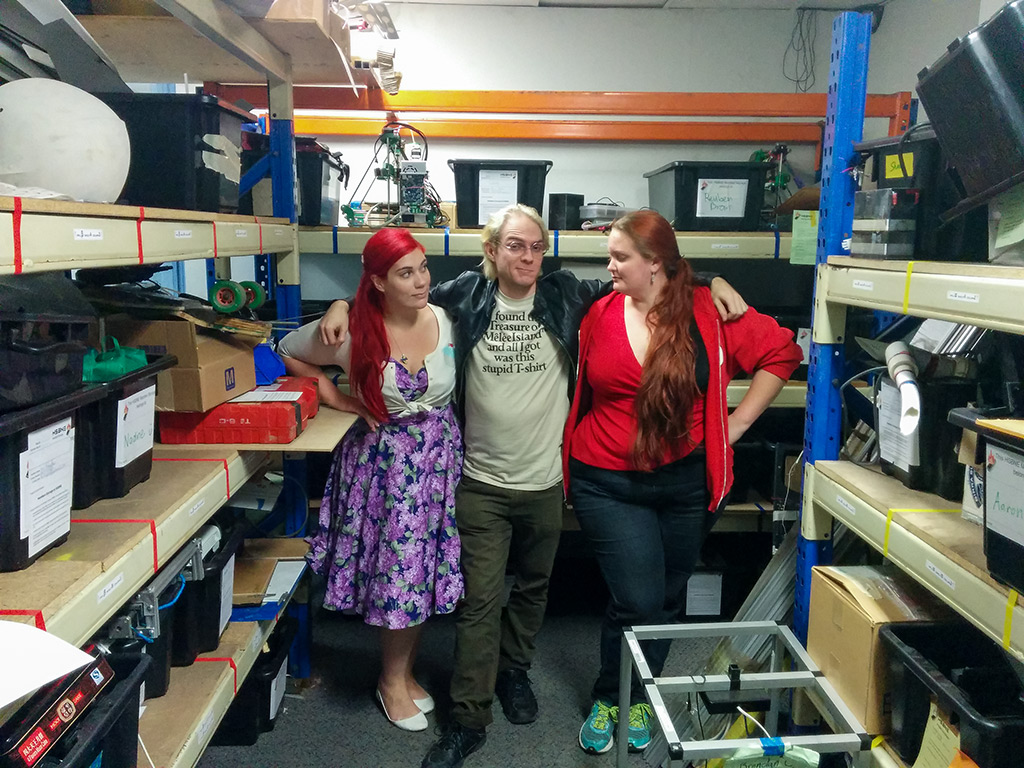 I’ve been cleaning and sorting Member’s Storage out the last few weeks so I thought I should get a photo in here! And apparently my previous shirt photo pose looked a little sleazy. To that, I say: “…llllllllladies”. Thanks, @Stevie and @Boo !

Geek shirt #59: The Protomen are a rock band that do music based on the Mega Man games. Perfect for when I want to let my freak out with my geek out. 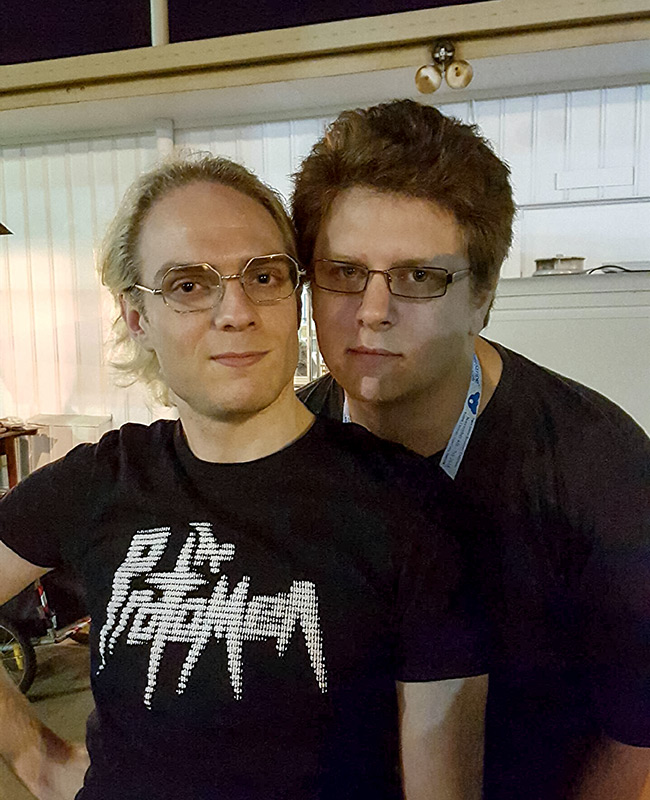 @crofty takes some of my weekly photos! He wanted to be in one for a change. And to go with last week’s photo, I say: “…llllllllads”.

Geek shirt #60: Uru: Online Ages Beyond MYST. This shirt was only released to those who completed an online ARG puzzle series over a decade ago. Which naturally includes me. 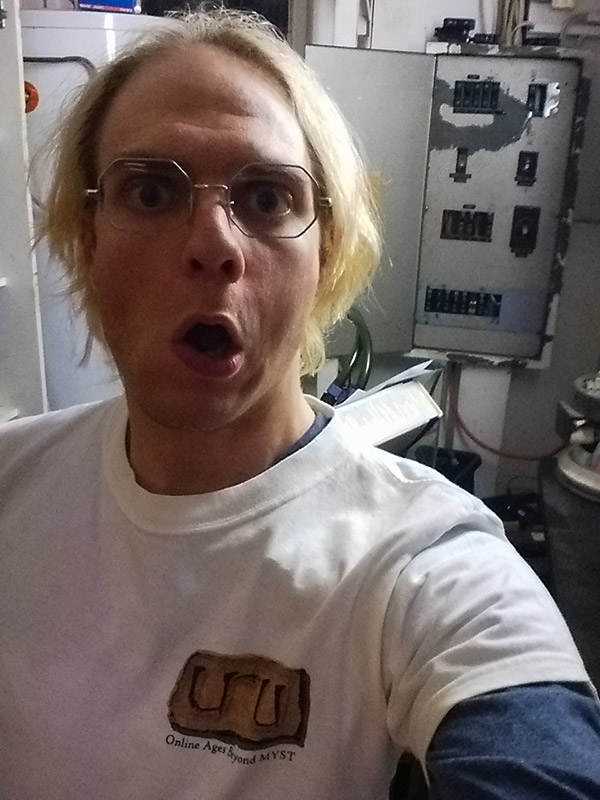 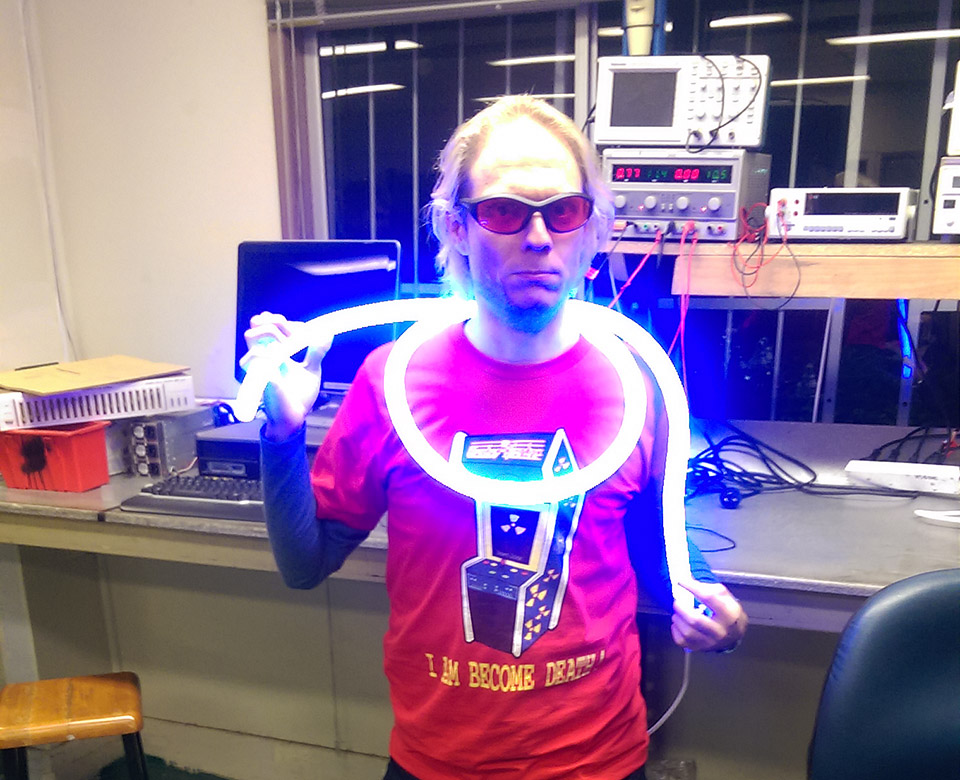 I had some LED rope with me today that looks like neon tube. It’s actually pretty fun to use as skipping rope, too.

Geek shirt #62: cute cartoon Marty & Doc with a DeLorean. Because why not! 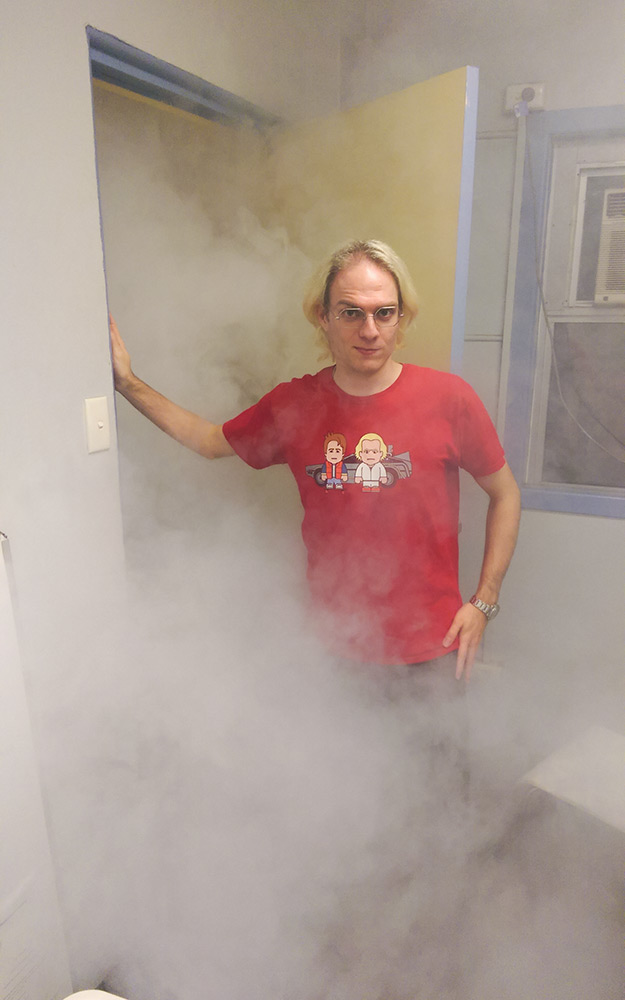 This is the room with the smoke. But it has too much smoke, so I dunno, you might want to wear a hat.

Geek shirt #63: Hail to the king, baby. This replica singlet was only handed out to those who stood in line for 3 hours to play Duke Nukem Forever at its first playable demo, at PAX Prime 2010. And sure the game may have sucked - but after 12 years, at least it was finally released! 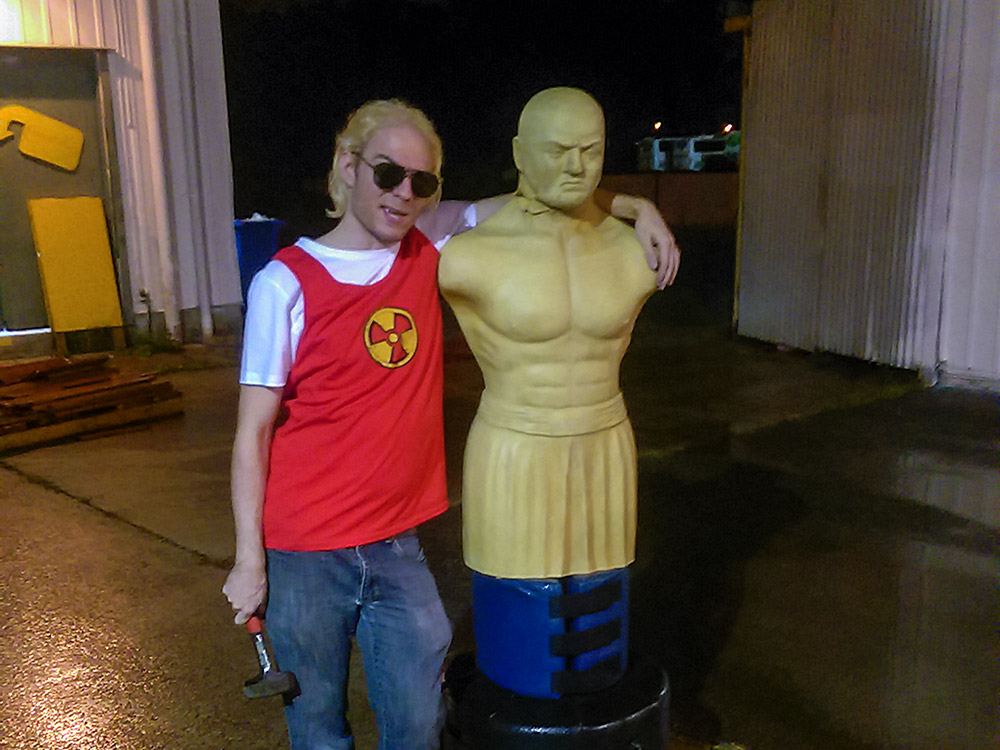 Last week someone questioned my strength. I proved it by carrying @crofty across our lobby and back. Thus I’m going a little overboard on the testosterone this week. Seconds after this photo was taken, I knocked this guy’s head off with the hammer in my hand (it was only just sitting on his shoulders).

Geek shirt #64: the post-apocalyptic costume I wore to Supanova Sydney, where I launched a product I’ve been developing with some friends - [Apocalypse Chow][1], a powdered meal in a bottle! 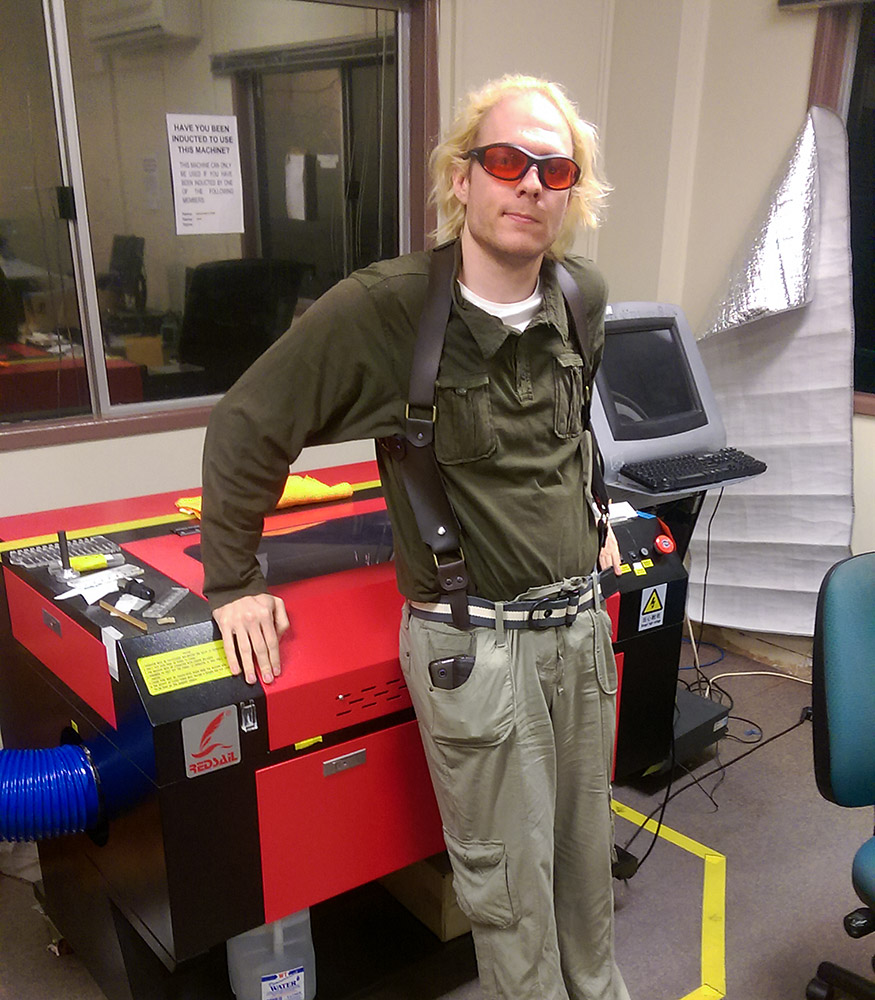 I’ve also been spending a lot of time lately working on the [laser cutter][2], making it faster, more powerful, safer, able to be used over a larger cutting bed, and easier to use. Thus the crazy goggles. Also, yay 64 shirts = 2^6 shirts! I’m such a geek.

Geek shirt #65: Uru: the ages beyond MYST. You might think this is the same shirt as #60… But look again! That one says ONLINE ages whereas this one says THE ages. These are completely different shirts, see?

This one was only available during Mysterium 2003. 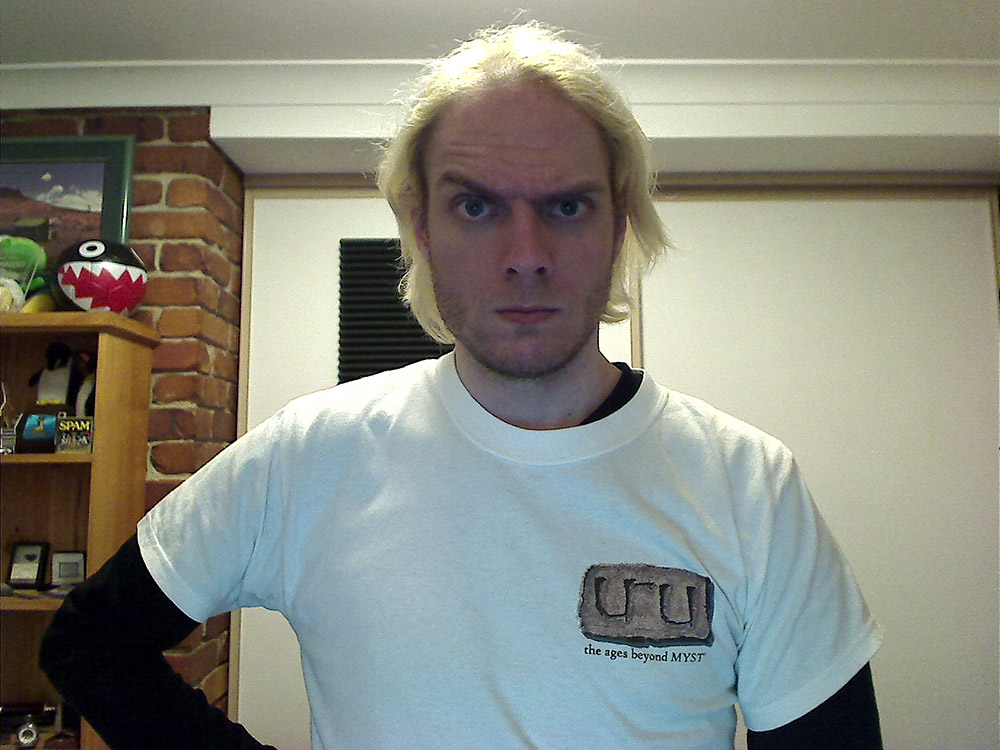 I forgot to take my shirt photo at the space this week. Whoops. Only my second one so far though, so I think I’m going pretty good!

Geek shirt #66: a plain old boring green shirt? Not geeky, you say? Well that’s the shirt I wore in Ouroboros, a short film about time travel where I played a drugged-up hobo from the future. I think that counts, so nyah. 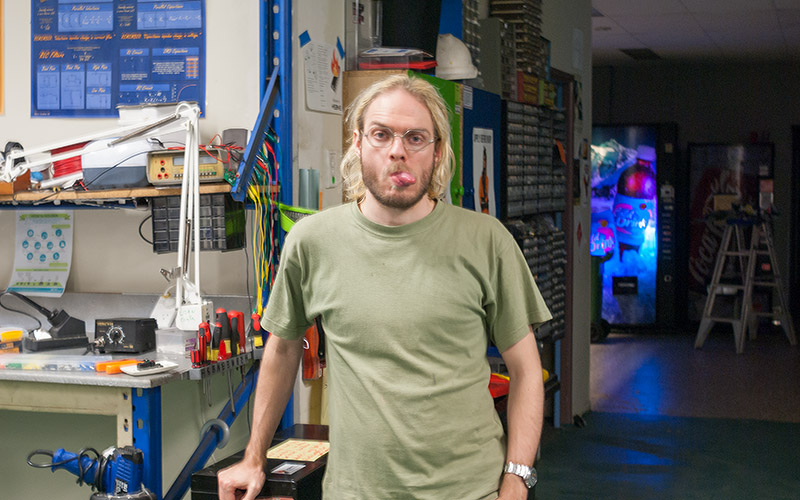 Geek shirt #67: a DeLorean crashing into a TARDIS. Something something space-time continuum something. 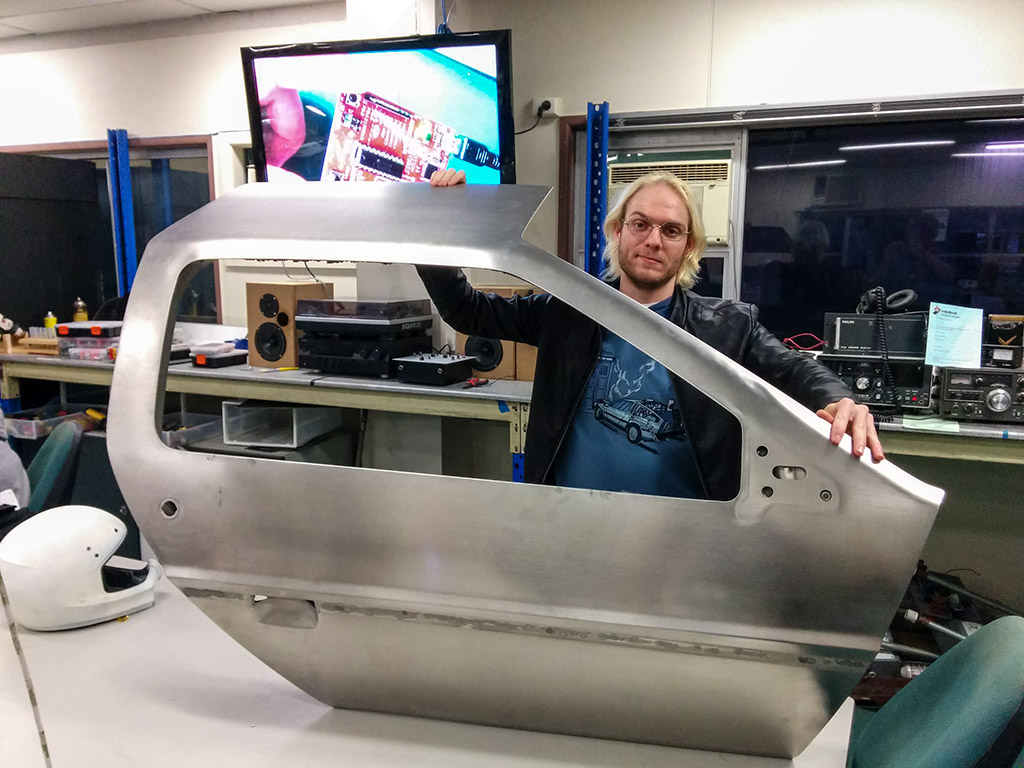 Speaking of time machine crashes, this is the damaged door from my DeLorean. It’s been replaced with a brand old one - 33 years old and never fitted to a car before.