Updates about the Construction down the road from us

PSA: Motorbike riders, don’t go too fast through there. Some of those “bumps” should be classified as jumps…

Well that didn’t take long - here’s the latest update for the next fortnight! The roundabout and surrounding roads are once again getting realigned. There doesn’t seem to be any night works scheduled this time.

No motor on my bike, but I’ll keep your advice in mind…

I still remember not seeing the double-speed-bump in the dappled shade at the entrance to New Farm Park one afternoon and hitting that full-speed on a bicycle.

Another update, this time just a traffic plan. This plan will be in place from Thursday 03/08/2017, for the month of August. I should have another update by the end of this week which will include construction activities too.

Here’s this fortnight’s full construction update. There’s no night works scheduled. The petrol station is being removed and some of the overhead power lines are coming down.

One more update. There’s no night works scheduled for this fortnight. The area near the end of MacArthur Avenue is getting closer to completion.

It’s that time again. Here’s the planned road layouts for the next 2 weeks.

Small text-only update that may impact us: unexpected night works will be happening on Remora Road (the one from the roundabout straight to traffic lights on Kingsford Smith Drive) for the two nights between Tuesday 19th September and Thursday 21st September. The road won’t be closed but you may be temporarily stopped from driving on it. So when you’re heading out to dinner next Tuesday night, it might be worth going the long way around.

Update #17 is out. No night works are scheduled. The old petrol station and display building in Area 1 is being fully demolished. If you’ve been skipping these updates this one might be worth looking at, as it includes the current plan for the final development through to April 2018, including the additional road & traffic lights to be constructed from Hercules Street to Kingsford Smith Drive, and the currently proposed final layout of the park. Because of this one’s larger file size, I’m hosting it off the forums.

Update #18. The tiny roundabout is staying tiny for a little bit longer.

Update #19. More tiny roundabout. The parking areas on the sides of the streets are getting pretty far along now.

Night works have been scheduled for Wednesday the 25th of October, so expect delays if you’re heading to/from the space at night.

Update #20. Remora Road is getting most of the work this time, with a central divider appearing down its middle. The roundabout is moving slightly towards MacArthur Avenue, and Harbour Road approaching the roundabout is changing shape.

Update #22. It’s the end of year and things always get a little quiet around this time. There’s no real changes to the roads or footpaths over the next two weeks, just more ongoing work in the existing construction areas.

Update #23. The roadworks sites will be closed from today until the 2nd of January, so that’s it for the rest of the year! From 2nd of January to 12th of January the scheduled work is mostly pavements and landscaping, with no real changes to the road layouts.

Update #24: I don’t know when I’ll be able to actually make it to the space lately because I’m currently having a rough time with some medical issues, but at a bare minimum I thought I could at least update this thread. The roads will be shifting around again as the main work being done over the next fortnight is line marking. This includes night works on Monday the 29th of January and Tuesday the 30th of January. In particular, the stretch of Harbour Road out the front of Port Side Wharf is finally being split into two lanes. See Area 1 for details.

And just to repeat that again for those that skim these message - there will be night works happening during our open day on Tuesday the 30th of January, so expect potential delays or maybe even a detour depending on what they’re doing at the time. I can’t say for certain if this advice will be accurate, but for my best guess I recommend skipping Harbour Road and only using Remora Road on Tuesday the 30th.

It’s been a while since I posted in here… And that’s because the newsletters have stopped because the construction has stopped. Huzzah, the traffic lights now work! The last bits of remaining work are apparently to be done by local govt, not state govt, so it might be a bit difficult for me to get updates through my current channels. I’ll still receive occasional updates about the area though, and if there’s anything interesting I’ll put it here.

The only thing of interest I’ve received in the past two months is that Hercules Street Park is due to close on Monday the 19th of March for planned upgrades. It’s being made larger, more trees are being planted and more facilities are being installed as well. The length of time it will be closed for is unknown at this point. While it’s closed, a temporary pop-up park will be available off the old Eat Street site at the end of Wharf Close. There’s a dog-off-leash area plus some children’s play equipment in this temporary park, so it’s a pretty good make-do.

What’s this? Here comes a new challenger update! Nothing that directly impacts us, but I thought I’d mention it anyway.

The street lighting is being updated on Harbour Road and Hercules Street, beginning on Monday the 9th of July and lasting for around 3 weeks. During this time parking will be limited on these roads from the construction and there may be intermittent road closures. You know the drill, expect the normal stuff.

This time I even have a fancy map:

More work is scheduled to happen at the intersection down the road from us from December to March. It’s mostly footpath work, but this will mean occasional lane closures. No night works are scheduled. Details all in the attached image. 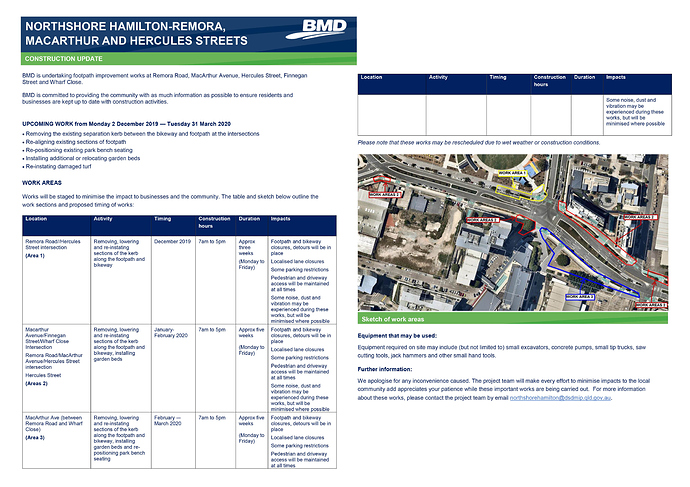