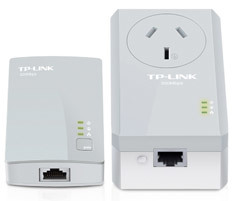 anyone have some to sell.

Wanted to know if someone had used them before. I want to run 50m and between circuits (under the same meter but different fuses). All the information I can find is that they recommend being close together and not plugged into power boards.

I’m pretty sure @Svenska, @rut4ger and co use Ethernet over Power for their current house. ping

What’s your use case?

If you are wanting any type of performance it would be easier to get two WAP’s.
The cheapest WAP’s I have found are -> http://www.umart.com.au/newsite/goods.php?id=22360

I suggested that Sven and Karl use the EoP stuff

They are cheap and cheerful and generally work fine. Sometimes if your meter setup isn’t filtered properly they los, e sync but restarting either end usually fixes that. I restart them once a month just to make sure everything is hunky dory.

By default as you put those in power points around the house they will create a mesh type network, but you can also pair specific units together to create a ‘secure’ network.

The only trouble I’ve had with these was I tried to use them in a power board that had surge protection built in and this filtered out the signal.

There is a few good things and a few drawbacks.

easy to setup, plug it into the wall, plug Ethernet cable in, done
Low ping, can’t see a difference between the thing and not
High through put, seems to be a bottleneck, though
Setup, never worry again

Easily disturbed, vacuum anywhere in the house kills it, chargers on the same circuit kills it…
Distance makes it slower
Price is rather high
Ethernet plugs into the top
Hates surge protection

Hope that helps, feel free to visit to see it in action and stuff.

Thank you all so much for the advice.

Due to the lay of the land the wireless has a lot of obstacles even with 2 bridges setup, but at that price, I might give it a go.

The network over power would have to run 15m back to the main board then 40ish meters on an areal cable to a sub board then 5m to a point. I might grab one of those n routers for the end point. I imagine the speeds I’ll be getting through the ethernet wont warrant anything faster than n.

@Svenska I will have to keep the vacuuming and droning to a minimum…unless i combine the two. Thanks for the link @nogthree

I’ll report back on my success

well that took me a while

It worked! Thanks @lhovo, @nogthree and @Svenska for your advice.

I ended up using the cheap routers hovo suggested and have reasonable speeds and pings considering the use case.

There is a wall and a metal grill between the first two routers and then 3 cars a tree, a hill, and a metal frame window to the last one.
iIm still getting 85%ish of the speed direct to main router but a ping of 75ms from the 35 original.

I’d call it a win! highly recommend this setup for a cheap quick solution. Took 30 min in total to setup, including the unboxing.