Just thinking… I realise there’s a thread where someone goes in and photographs what’s in the bone yard, but digging in there this evening, I observed there’s a container full to the brim of tubes of ICs. This is detail you don’t see from photos.

Okay, they’re all DIPs, and I’m sure I saw at least two Z80s in there… but still, not useless. I went in there purely for a sticky beak, and came out with a DIN-5 panel-mount connector and a RJ-45 socket, both of which will be used on the bicycle for the radio station on there. There’s at least 6 DIN-5s, and a whole tube of RJ-45s. (My headsets all use DIN-5 connectors, and the Yaesu hand-mics are RJ-45s. Sadly no DIN-6s, but never mind.)

I also saw a handful of 6.5mm phono jacks of the type @nogthree was looking for as alarmed keyrings for the wood shop / metal shop / spare gate keys.

I’m thinking it might be worth setting up a wiki page with a catalogue of what parts are actually in there. I threw together a similar catalogue of my own IC collection, and have found it handy for figuring out if I have the parts for a given project. My collection started out as a mystery box purchase on eBay: someone had a big box like the one in the bone yard and didn’t feel like cataloguing it.

Okay, without bumping an old thread… I did see this article of relevance this morning. 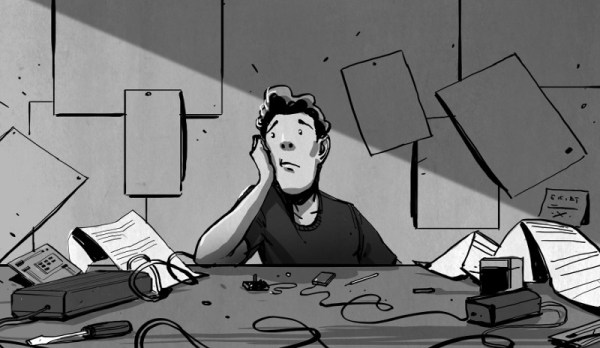 My basement workshop is so crammed full of stuff I literally can’t use it. My workbench, a sturdy hardwood library table, is covered in junk to the point that I couldn’t find a square f…

… and for what it’s worth, much of the house @vk4mdl and I share looks like the bone yard. (Not something I am proud of.)

The ideas in that old thread are good ones, and I see a useful system in the Doom Shelves. Incoming stuff is photographed as it goes in. The stock-taking exercise that @riumplus undertakes photographing the boneyard is definitely a useful exercise for the bigger things.

I guess that can be a first step… let’s consider those ICs in their tubes as there’s an identical problem sitting at home: how to store those tubes in a more organised manner. I knocked up a Django app for managing the ones at home, abusing its admin interface.

Django proved to not quite be the best way to implement it, but the concept did work until I got lazy with new parts, partly because of the haphazard manner in which I’m actually storing these components. The app itself used a tree-structure for identifying storage bins, so if I was looking for a DIP-8 LM311, it might tell me that I have 4 sitting in “IC Box 1/Shelf 2/Row 4/Column 6”.

If the ICs were sitting in a tube too big to fit in the usual storage boxes though, it’d be in one of the junk boxes, which are big white plastic boxes … big enough to hold the tubes without them poking out (an improvement over the HSBNE IC tube storage) but no better organised. The tubes themselves are numbered, as it’s easier to see a number written on the tube than on the ICs themselves (and the tube might hold other ICs later on), but you find yourself spending hours digging around to find it.

So that might be my first space-improvement project, a way to better organise those IC tubes so we can better catalogue them and find them. Then they might get used.

I’m not sure what infrastructure HSBNE have for hosting a web-app. The wiki is what immediately came to mind, but I don’t want to make additions or removals any more complicated than log in and click a few buttons. Trello definitely works for the doom shelves, so that would serve for cataloguing incoming stuff. From there, I guess in the Trello ticket it can be noted where in the bone yard something got put for updating the wiki later (at which, it then is taken off Trello).

A “last rites” column for outgoing would serve for those who might’ve been holding back on some item: if they want to keep something in “last rites”, then it’s their problem to give that item a home.

We don’t have infinite space, so we do need a time limit on what stays there, based on size: small items aren’t a burden to carry and so can stay longer but very large items are a nuisance to keep around for long periods.

For “working items” (such as unused ICs or other parts), there’s also the opportunity for two classes of “last rites”: stuff that’s saleable may be worth listing on an auction site or taking to a swap meet, which will bring income to the space. Perhaps a “going, going, … gone” category, where if no one at HSBNE is interested, it gets listed for a month somewhere, then eventually gets binned if no takers outside.

Given a couple of second hand android phones I could set up an automatic system for ‘this item has entered the boneyard and will be gone in X months’ similar to the doom shelves.

I like your commentary on the ideas though, keep it up. 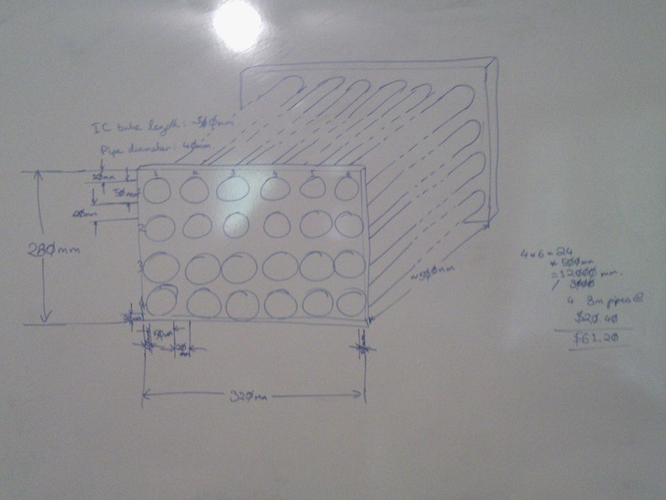 There’s an idea for IC storage. As for the Trello bit, I’ve created this: https://trello.com/b/5GJoH2K0/bone-yard

And I just realised I got my dimensions mixed up… so ignore those.
Correct dimensions are:

Okay, so the new unit is built, and for now I’ve put a selection of fixed-function logic ICs in, and I’ve also grabbed all the SMD stuff (mostly SOIC) and shoved that into one or two storage slots. 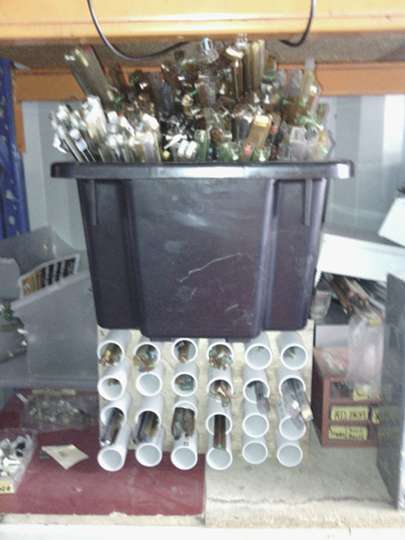 I did start cataloguing this in Trello, but realised that after a lot of work, I had gotten nowhere, so I sorted into fixed-function logic, special function, and unknown.

In amongst the special function stuff I saw some of the biggest DIP ICs I’ve ever seen… in the form of some Motorola 68k CPUs… numerous Dallas clock chips (both DIP and SOIC)… a handful of I²C EEPROMs in DIP8 and other useful bits. There’s IC sockets in DIP8, DIP14, DIP16, DIP20, DIP24, DIP28 wide and DIP-40 wide.

The stuff in the old box can be grouped into two parts… the fixed-function logic ICs are bundled together with tubes with the same logic number, so 74xx00 are all together, 74xx04… 74xx74, etc.

Still need to catalogue it properly, but at least now there’s a snowflake’s chance of being able to find things.

Speaking of the boneyard. I went in today to do some cleaning.

Didn’t make it very far because of lack of space due to lots of dell 19" monitors and other various things like rack server type computers just taking up so much space.

Are the 19" monitors earmarked for classrooms or something or shall I take the majority of them to Substation33 ?

I will def take the gutted and useless servers to make space.

Also the box of telephones does not seem to have moved or changed in a year. If no one objects I will take most of them as well.

the lcds were a recent donation, and all work fine, don’t send them to be scrapped by sub33, pls. At the very least, they could go on gumtree and be turned to money (any volunteers?) otherwise , ppl will use them once they know they are there. Throw out old low-value crap, not recent crap.

My thought with the monitors is that they are low value take up a lot of space and are not unique. On any given Sunday you can drive down to a suburb with kerbside on and pick up 10 common LCD monitors.

If they where 20.1" LCDs rather than 19" LCDs I would not dream of scrapping them.

I have not seen them. If they are still their on Tuesday I will take one.

Okay… so more work done… this time I basically photographed everything. See the Trello link above.

As for the ICs I looked at last time, I have at least photographed those too, or tried to.

Yes, the auto-focus on my phone’s camera is rubbish. I plan to put these into Trello later, but at least now I can hopefully do it from the photographs. The photos are up on my own webspace for now as there’s literally 231MB of photos to go through.

Figures, so I’m identifying many of the chips and linking or uploading datasheets where I find them.

One mystery is the VLSI VL7C213… which is some sort of modem controller chip. Google search helpfully pointed out this:

Not entirely surprising that people have been doing this before.