Continuing the discussion from Treasurer wants your cause info:

As part of getting a cause together you have to register with the treasurer.

The treasurer HAS YET to receive ANY application.

Please email this to the treasurer@hsbne email address

I have now registered the Digital Fabrcation Cause with the treasurer.
Next Tuesday, we should get together for a discussion about our aims and purposes.
There is no meeting this week, let’s make it 8pm in the room where the laser cutting machine is. Hence forth, Digital Fabrication cause space.
Hope to see you there,
Don McGuinness

I’d like to add a big thank to those who worked on our space yesterday. It is off to a good start.

This is in addition to the information posted in the General section.
Victor and I will be running the course and the 8 attendees will each be paying $50.
It runs over three weeks, 7th 14th and 21st March, on Saturday afternoons for about 4 hours.
On the 14th and 21st we may require assistance from some cause members to help with the calibration and software parts of the workshop.
Next Tuesday night, we will start to delegate tasks in preparation for the Re launch event coming up on the 28th Feb.
We need to -
1 Make some shelving, so we can preserve desk space.
2 It was suggested we level the benches before running printers on them.
3 Finish our part of the sign for HSBNE. Ours is the ‘E’
4 Get at least one printer running.
5 Get something set up for showcase purposes for the Re launching.

Latest news is the joining of the cnc routing cause and digital fabrication. I will update the membership list with the treasurer so that next month we can enjoy the financial benefit of more than ten members in our cause.
We had our first meeting last Tuesday and several members were on hand to plan the use of the two rooms we have. One is to be the dirty room for the cnc routers, and the clean room for 3D printers and laser cutting machine.
Aaron took the meetings notes and I will move to make these available to the membership in general for the benefit of those who couldn’t attend.

Hi all,
Anyone going to the meeting tonight, we will have a meeting in the DigFab/CNC room at 7.30. It is second last Tuesday before Re launch party, so we need to consolidate the good start we made last Tuesday.

Hi Don, I’ve joined your cause. First thing I’m going to help out with the code on the lasercutter once Nog gets the new smoothie board installed.

I’ve been working on the rastering code in the Marlin laser cutter fork - I’ll throw it up on github when I get a chance. I think that code probably wouldn’t be too hard to port over to whatever firmware Smoothie ends up running. 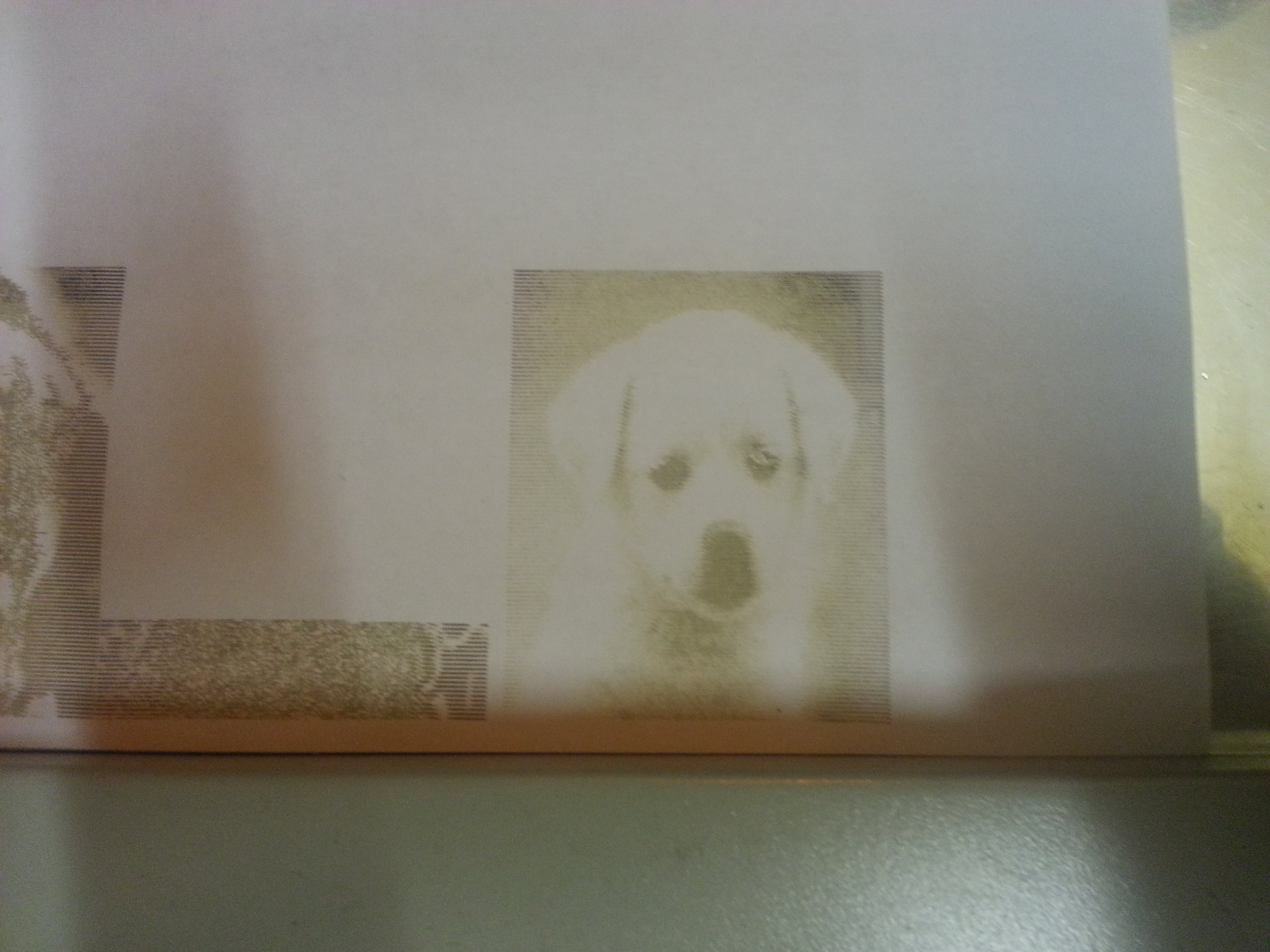 The latest thing I’ve been working on is using inkscape to export vectors and rasters in 1 job. That way you can do things like put a border around your raster to

Hi Leon,
I’m glad you’re in. That sounds very promicing. Next Tuesday night we’ll see where we are up to with it. It would be good to have it running for the re launch event. It would have been great to laser engrave the puppy’s image with it. Hope to see you Tuesday night.

Also, you bring to mind that we need to see greater participation in this forum by the membership. We need to co-ordinate better than just the Tuesday night meetings.
Thanks, Don.

The wiki page is now up. If your name isn’t in the membership list or you are just joining, please add it yourself. I will then update the list with the treasurer. This has to be done before the end of each month to ensure maximun allocation of funds to our cause. I believe we can all edit the wiki.

This coming Tuesday, we’ll try to get as many as possible in our rooms for the last meeting before the re launch party. Aim for 7.30pm.
Thanks.

Thats correct, anyone can edit the wiki. We just require logins so that we don’t get hassled by anonymous accounts.

http://wiki.hsbne.org/Causes/DigitalFabrication for those that don’t want to guess.

Now we are re launched, it’s time to finish off our two rooms so we can use them effectively. There’ll be a meeting at about 7.30 to organise this. See you all there. Thanks.

No meeting this week,! Yah! Instead we’ll just hang out in our digs and get the cnc machines hooked up and running. At some point we’ll have a classes on using them. That won’t be until we are finished with the first printer workshops, running through to the end of March.
Further to the outcome of last weeks meeting, where we will have sub divisions in our cause, I will look after the printers, Sven will likely look after the cnc machines and somebody will oversee the laser cutting equipment.

The CNC’s are hooked up and running.

@Sven2 and @Don_McGuinness You guys need to increase your communication, please!

I’ve just finished some much needed work on a new inkscape gcode exporter for the laser cutter. I’ll post up a link momentarily.

Nice work Leon! How are you controlling the power output on your ramps board?

Here’s the code I just pushed it to my github : https://github.com/TurnkeyTyranny/laser-gcode-exporter-inkscape-plugin

Yep exactly the same except in ramps it’s 1 to 100 for the S value. I was kind and even included an option in the inkscape script to export power levels to run on smoothie numbers.

G0 in marlin is a laser off movement. G1 is a straight line with laser on, G2 is clockwise arc and G3 is counterclockwise arc. At the moment I’ve modded my version of marlin to have G1 through 3 always be laser on while G0 is laser off. Laser can also be controlled with M5 and M3 but I don’t use them apart from M5 to turn off the laser after a set of moves. I’m not sure if smoothie needs the M commands to turn on and off the laser.

I’ve also been working on the pulsed lasing operating code for the last 12 hours or so and have just got it all working. So I can pulse the laser at x pulses per millimetre to get a much smoother cut than just continuous wave.

With the code linked you can now have multiple cuts in 1 export that are performed at different speeds, laser power and feed rates etc. Very handy.

Also, 76% power runs my tube at 18ma, which is its rated maximum current. Does the space’s tube have a milliampre meter inline to see what the smoothie % correlates to in real world current draw?

The cnc machines are not ready to be run until there are shrouds around the cutting tools, for attachmentment of vacuum hoses. We have been in discussion about this last Tuesday. I hope that clears up any miscommunication. @Svenska

Hi Don, just to add specifics, the dates of the inaugural series of workshops got moved over one week (compared to dates you posted on the 6th of Feb) and now are the 14th, 21st and 28th of March from 1pm to 5pm in the classroom. As soon as you have access to the general calendar you can add those details there.

What will the courses be running through?