My company is moving and having a clearout, there are 4 of these parabolic antenna dishes available otherwise they will be scrapped. Seems a shame to crush them, so I thought some hacker might be interested!

They are 1.8m in diameter, made of spun Aluminium and weigh about 5kg each. They are in Yeronga and ideally whoever takes them would pick them up some time this week or early next week, in business hours or early evening.

Could be good for radio projects, radio astronomy, solar furnace, or audio project? Or just for making a giant wok.

Get in touch if you are interested. I’ll try to be fair, roughly first come first served with a preference to those who can pick up, and have interesting project ideas

I might be able to help with transport if you can’t move them yourself. Or I may be able to just bring them to the hackerspace.

Hopefully I’ll get email replies to this message. Or you can try messaging me on the IRC, I’m blueshift. 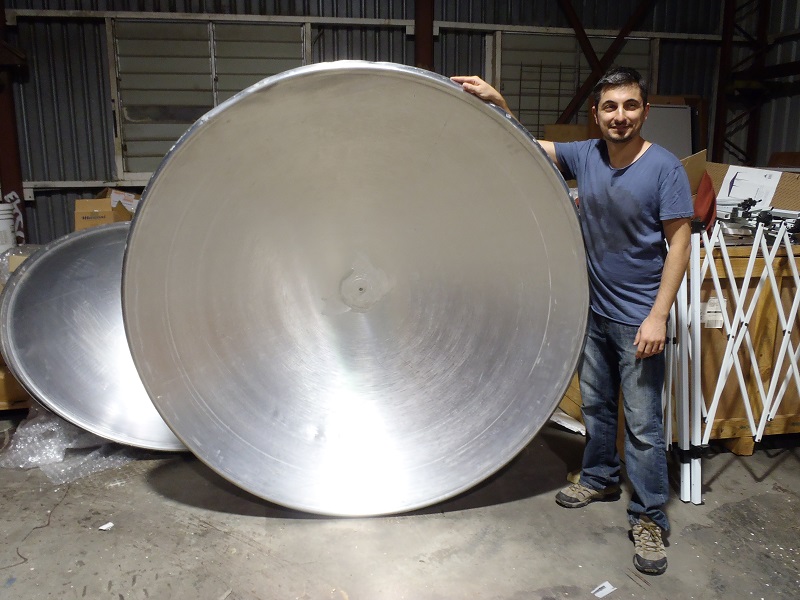 hell yeah. I’d be interested- at the very least they would be good decorations.

Can I raise my hand for one of these? I don’t have a single specific project in mind since some of my ideas depend on how far away the focal point is, but they have so many potential uses I’d hate to see them just recycled. And if someone has a specific idea before I come up with a use, they’re welcome to have mine.

I’m keen to take 2 if possible. One for a solar furnace and one for a cool chair or something

Hey guys, glad to see some takers interested. Are you able to pick up?

I see on the HSBNE front page that someone was listening to satellites recently. Who did that? It would be cool to see some satellite comms or radio astronomy stuff done with these.

I see on the HSBNE front page that someone was listening to satellites recently. Who did that?

The frequencies I used for my satellite that night were best received with a Yagi antenna but a 1.8m dish is a pretty big reflector, and all my equipment except for my antenna has a pretty wide frequency range. There’s only one way to find out what I can receive - by having a go!

The space has a trailer we could use for pickup but I don’t have a car with a towbar. Anyone able to help out? I don’t mind covering your petrol & a drink or two as thanks!

I’m a bit far away to help at the moment, but if I can help monetarily instead let me know.

I don’t have a towbar on my car unfortunately - something I should remedy at some point.
I might be able to transport them on the roof with some creativity and perhaps putting a couple of holes in the rims.

One of these could be polished and turned into a life-size batsignal. I’d like to see the HSBNE logo on a cloud one Tuesday night.

The dishes have now been evacuated to a Carindale garage away from the danger of being skipped. Onward travel to you guys still needs to be arranged before too long, get in touch.

@Blueshift I can do a pickup and drop off to hackerspace if needed.

Are these still around? I totally forgot about them, still keen as hell

If I could put my hand up for one please

Mine will be along the lines of that. Wanting to see how far I can push a
signel and hold it there for as long as possible.

Lex, that would be good. How would you move them? They are, obviously,
pretty big.

Post necromancy! I have these dishes now on the roof of my car and will drop them at the space at the open day today. There are also a couple of 1.2m bonus dishes. I may be able to drop one or two off at other locations if convenient, contact me this morning if you want a dish or two and want me to drop at your home/mad science lab/place of worship.