Help / suggestions needed for building a 1-1.5m tall robot to follow a HSBNE group during Brisbane on Parade on the 1st of November

As I briefly mentioned on Tuesday night, we have been asked to participated at Brisbane on Parade http://g20cultural.initiatives.qld.gov.au/events/brisbane-on-parade.aspx (a G20 cultural event) on the 1st of November.
During this event a group of HSBNE members (The more the better) will be marching through the CBD from 4 to 5:30-6 showcasing how great HSBNE is.
We have been allocated a total budget of $2,500 to build a robot between 1 and 1.5 meters high that can follow us during the parade.
In order to make this happen, we need to assemble a team to take charge of the building and programming of the robot.
Anyone who is able to help or has any suggestion on how to tackle this build, please post below. For example, one idea would be to fix and modify one of the segway lookalikes.

Any help is appreciated.

We really need a few keen members to make this happen

Im available for this, I’ll build a frame.

I’m keen to get involved. I’m interested to hear peoples suggestions on what it could look like.

So far the technical requirements are:

Giant hexa-/octo-ped robot, in the style of our logo, with streamers and compressed air for flame? Decked out in LEDs.

I’d suggest that if we can find a willing “champion” for this ( ie an appointed dictator ), then they should be trusted to do everything toward the actual goal, and be given the right to spend to a budget ( eg $2k, with the remainder $500 going into group coffers?) all us rubber-neckers , cookie-lickers, and bike-shed-ers should get out of the way… or it’s not going to be done at all, or on-time.

So… are there any unemployed or student types with plenty of time in the next 3 weeks, and some artistic/creative talent who’d like to spend $2k, to make something for a public opportunity?

I agree with Buzz about having a champion (aka. appointed dictator). There’s lots of choices to be made, and lots of different transactions to be approved. Too many for each to be voted on, even if only a small group is voting, especially for the given timeframe.

I’m willing to stand for that position if no-one else wants it. However I’m not particularly creative and would like lots of creative/artistic input.
I’m more keen for @rut4ger to take the position (nudge nudge) - given he has demonstrated he has the hacker/maker aesthetic down-pat and gets things done.

Strandbeest style legs are pretty simple to put together. I could make that as a base. They’re pretty awesome to look at and once you make one set of legs, you can just jig them out one after another. and we could easily RC it. Or if we were really keen we could even have someone small ride it.

Are we really going to be allowed to have flame throwers? Doesn’t seem like the kind of thing they’re going to be cool with.

If we’re really going to do this, we need to start right now or it’s not going to happen.

Strandbeest style legs would be awesome. Having a rider would add to the theatrics (and would be pretty fun to use after the parade).

Would be an awesome thing to have around. I’m keen as shit for it. I’ve got some electric window motors that would drive it nicely, I’d just need some square steel tube, a little plate, a bunch of nuts and bolts and a bunch of bearings.

I can provide a smaller scale model of the Strandbeest for reference.

Alternatively there’s also the Brabeast on Thingiverse which is a good reference.

Strandbeests are awesome but can’t steer. Maybe a good alternative would be to make a strandbeest for the front of the vehicle with 2 undriven wheels behind to provide steering, in the spirit of a half track.
[ 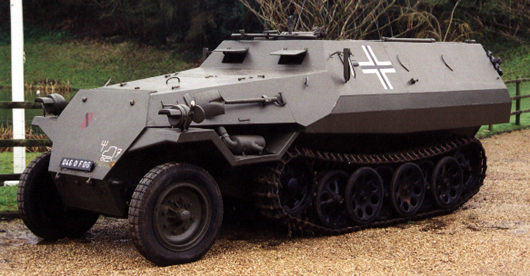 Maybe it could be styled as a buggalo with a chariot behind, and steered with “reins” which pivot the joint between. This solves the steering problem, makes it look nerdy and cool, and all the rider’s weight is on the bicycle wheels under the chariot rather than the strandbeest’s legs. 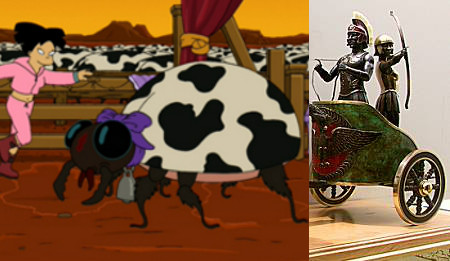 I’d love to help out with this, but considering my limited financial and welding abilities, I’m not suitable to be the project lead.

My vote’s for something Strandbeest-based since they’re not that complicated to build once you’ve got the first leg template done and they have a fantastic “wow” factor. I’d love to see a pure Strandbeest big enough for someone to ride but I don’t think we have the time to troubleshoot its structural integrity with that much extra weight.

I think aiming for rideable like a chariot or just RC-based is a more realistic goal in our limited timescale.

I can’t weld and can’t champion this but I’m willing to help out where I can to get this done.

I currently not working, have a welder, can weld and fabricate stuff.

If @theban wants to champion it I will become a builder with @rut4ger and co.

Is someone willing to put the effort into drawing and estimating the raw material required?

I would assume a metal drop saw would be handy for such jobs (do we have one at HSBNE?)

Yet to confirm the details, but this will be paid for by external source…
So unless anyone has any objections, or would like to point out any rule stating we can’t…
I would like to use this incoming money for this build as stated in Victors message…

Im attempting a rough materials costing, so far we need,

If anyone feels like pricing those items from suppliers close to the space, please do. I’m working on getting a drawing down .

Do you think we can power it with the 200W motors (previously air pumps) in the boneyard, or will we need more power?

An electric powered strandbeast like the one mike posted about… But bigger!!! Would be awesome!!! I might have the motors for it… I’ll post about it later this afternoon !

Not-German-Sven gave me some electric window winder motors which I think could be useful. Not sure but if they are it would make it a very simple deal.

Electric window wiper motors have a tonne of torque and run fastest at 12V.

You don’t need an ESC to run them, just to vary the voltage to them.