Hey all.
I’d love any input for Line Following robots. Who’s build one or even competed before?

Also interested in suggestions for kit bots to sell to competitors (such as schools etc).

Furthermore i’m looking to put together a class for how to build one/program one. A basics class and possibly an advanced one. Anyone keen to attend or host?

All information would be useful as i’d also like to put together a ‘how to build and program a line robot’ specifically for those who cant attend HSBNE regularly (again schools) and would like to compete in the upcoming robot competition. link - HSBNE Robot Competition 2016
Ideally this would include a component selection, kit building, design choices, power management, basic and programming guides.

i’ve had thoughts about line following robots, if you know something i’d be interested to listening

How did you go with your motor drivers last teusday ?

I did, finally! I had a minor Arduino fault which had me stumped for a bit

just just needed a reset before working lol. You wouldn’t believe it but it works quite well and it’s only a 600mA.

I’ll be working on the line sensors next

Please throw some chat if you have any suggestions, ideas or previous experience with line following robots

I’d be very keen to attend a class on this!

I’ve built a line-follower before for a Uni subject, PID control with mapping functionality and able to adhere to speed limit zones. I’d be happy to answer questions and chat about ideas.

That would be great @Megabound! I’ll send your a pm

Firstly I am curious what type of sensors you used. I was hoping you had some recommendations for analogue sensors.

They quite sensitive to changes in coverage, you’ll see a fairly linear response as you move the sensor from full black to full white, and add on to that a bank of 3 (or more for greater control opportunities) and you’ve got a great scene for a PID controller, but, you can also use just one and get some bang-bang control good enough to follow a line at a good pace.

I have an advanced robot called robbie. Still in construction,although it is nearing completion,welcome to talk too anyone about it.

Great thanks @pamela_hauff . Would love to see a build log

Still in the process of creating a write up. Unfortunately the projector I have currently is not powerfull enough to test code. Maybe around January I can upgrade it. In the meantime I am testing other functionality. Including next week the gyroscopes. This version has six wheels two active centre wheels. I think it would be possible just to have have two larger wheels. At first I was worried about power consumption with the two wheeled version. At this stage I am unsure if that is a large enough factor.
Pam

Here is the thingiverse link. 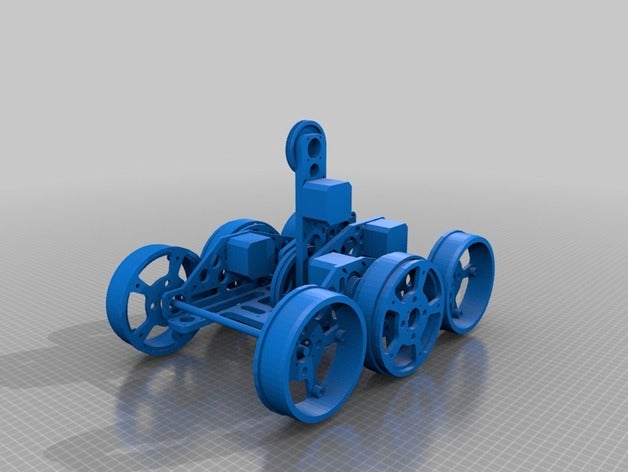