There are a few awesome humans at HSBNE sourcing batteries from reclaimed laptops and drill batteries.

I’d be happy to start with ~250 cells before November

@Hally
I think if you can come to Brisbane you can do the next pick up from the power tool company we got an agreement with. You would have to dispose of all the left overs yourself. Ping me for more details.

@Aurum
“The best 18650” is a very relative measure. For somebody building a power wall its capacity, for somebody making an electric skateboard its high discharge. Just to name two examples on opposite ends of the spectrum.
Reclaimed aren’t half capacity. Usually it pans out more like 90%. 10kWh isn’t that big. Have a look for “second life storage” there is loads bigger builds and it should answer your other questions as well, like connections, charging, battery management…

As @Svenska mentioned, the type of battery you need and how you put together packs, chargers etc, heavily depends on what you’re using it for. Is it for a DIY powerwall, electric car/motorbike, or something else entirely?

Just to add to what @Svenska said about the capacity. Reclaimed batteries vary wildly. If you find a good source, like our power tool company, you will find most cells around 80-90% capacity. Other cells, such as old laptop batteries etc vary quite a bit between packs/batches.

The other thing to note, is the failure rate. Our reclaimed power tool packs have a cell failure rate of around 10-20%. This means out of a full box of battery packs, once you strip them apart, about 10-20% of the cells are either dead or otherwise unusuable. You will probably lose a few more percent after you test all the cells too.

Are you sure you don’t mean the opposite?

In any case, reclaimed packs are a useful source of cells is precisely because 10-20% of the cells are bad. One or two cells die and the pack is dead even though the rest of the cells are still in good condition and can be recovered.

Oops my bad, I meant the usable cells you get out of a pack generally average around 80-90%.

I’m going to need a bunch of these for my R2 project too.

I think that its just A common thing that makers need 18650’s, personally between my different projects i have gone through about 600 cells in the last 12 months

Thanks for the great feedback team.

@Aurum It’s going to be a lot of cells! Probably in a 12S configuration (12 in series). Each of these packs will have their own BMS system which will be in charge of balancing the pack. Charging and discharging is achieved by making sure your charger max output current is below the max charge current of your battery bank. Same but reverse applies to Discharge. I am still very open to design ideas!

@Svenska you are the best!!! PING PING PING

@Jabelone I will be finishing my esk8t and also building a small off grid system. 20% dead cells has been my experience as well and I am happy with 80% capacity

so true @DistractionKitten! As such I will try my best to make a portion available to @dave and other HSBNE members when I work out my harvesting process. I know Buzz and Svenska have build some sweet riggs for this in the past 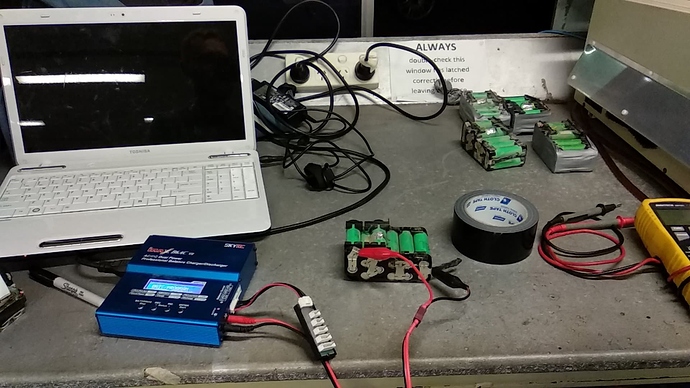 received_21735604062473071920×1080 169 KB
Having been informed of a lack of lipo storage and disposal policy I have opted to only store lipos in a sealed insulated container at or below storage voltage. All batteries will be removed off site within the period of my project. Charging will be done in a safe ventilated area using dedicated chargers. Disposal will be done in an environmentally friendly manner and in accordance with local laws. I hope to find a free disposal solution for this everyone can use in the future. I have a few promising leads.
I hope to provide some documentation and procedures we can pop on the hsbne wiki.
Any concerns please PM me.

So far the cells that haven’t been for a swim are in great condition. Failed cell ratio is about 1:20 ! Woo

I’ll be building a diy mass cell tester and charger. Similar to those previously made. Hoping to make it cheap and repeatable based around the tp4056 using NTC thermisters, current, voltage monitoring and most importantly with low voltage and high voltage e-stop. Oh and web based but I’ll need help with that last one.

All battiers are off site. Only the casings to be returned to the supplyer remain. These will be taken back next chance I can return or whom ever does the next harvest.

The Harvest went better than expected and there are many more batteries available at a much faster rate than previously thought. Our annonymous supplier is able to provide ~3kw of batteries every few weeks. I will arrange for them to let us know a collection is ready, one i get a battery cause @hsbne and storage-disposal system sorted.

On that note. Out of the 1,676 18650’s cells only 144 were completely non revcoverable due to corrosion. these cells were disposed of correcly.
DISPOSAL
All of the complanies contacted that deal directly with Lithium ‘recycling’ have yet to respond to my inquires. I disposed of the batteries at BatteryWorld who happily took them however they did mention that they pay ~$10/kg to dispose of them. Alledgidly this is offset by the money they make from lead acid disposal which they make money from. Future dead cells will definately be going in their purple bins in store.

Thats right 1,532 cells ready for testing and tearing down. However I am only 60cells into separating the packs.

Even at a modest 80% cells harvesting success and an expected capacity of 80% that is 5.286Kw of storage. Not bad for a few nights work and $20 of containers and insulating tape.

I will start a build log for the teardown and testing. As stated before I think with the interest we need to have a Battery cause. It was suggested to me to join it with the Electronics Cause. Thoughts?