Clean water is nice. As the guy who spends a lot of time buying & stocking the vending machines with bottled water, people might think I have a vested interest in selling more bottles of water. But staying hydrated is important and above petty things like profits!

The water from the tap in the end room with the laser cutter has started to taste a little funky and its flow rate was getting pretty low. This is normally a sign the filter is in need of replacement. So, that’s exactly what I did! 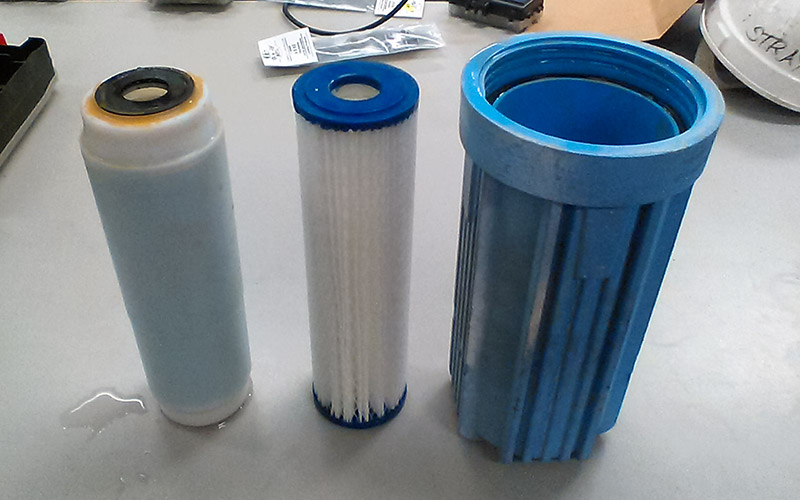 To say the old one was clogged up is… a gross understatement. And also a “gross” understatement. The new one won’t filter absolutely everything as it’s not an activated carbon filter, but it’s a reusable filter which will be handy given our water quality. I highly suggest you only drink from either here or the quad water filter.

For anyone who cares, it’s a 1-micron pleated polyester washable filter in the standard 10" by 2.5" size. There is a shut-off valve just before this water filter but I don’t recommend you use it since it’s seized up. The master shut-off valve at the corner of the main building doesn’t shut off this water, so the easiest way to shut off the supply to wash this filter in the future is via the whole space’s water meter and shut-off valve, which is located outside the fence in the corner between the main building and the science lab.

The filter cost me $16.43 but I’m not going to ask to be reimbursed for this from space funds, because I think clean water is important. Anyone who wishes to thank me is more than welcome to buy me dinner on Tuesday (or chip in a few dollars for it!).

Good job on changing the filter. I am still surprised by how many people notice a change in taste/smell and still keep using the filtered water.

I think you will find that what you removed was a mixed bed resin filter, not an activated carbon one. The benefit of the MBR over the sediment filter you have replaced it with is that it can remove heavy metals (lead, copper etc) from the water. Depending on the age of the pipework in the buildings, this may be a good thing. Of course, you really need a reverse osmosis system to remove everything down to zero parts per million.

I would recommend that you keep a record of when the filter was changed and when it should next be changed/cleaned. You might want to keep this on the shorter side to start with, and then adjust how many months you leave it based on how quickly it gets dirty. We place a sticker on the units with a last serviced/next service due and put a new one on every time the filters are replaced. Ideally it is in a location next to the tap which is using the water, so it is visible to anyone who fills something from it and doesn’t get lost in a cupboard on the side of the filter housing.

Just an FYI about the water chiller/filter in the quad, it needs to be manually refilled as the plumbing to the workshop needs further investigation/leak finding. You can refill it by turning on the valve below the tap next to the arts room door, but this will cause water to bubble up from the ground near the eye wash station so you can’t just leave it turned on

Regarding the broken pipe here, I will be bringing my Jack hammer in next week and a Dimond blade to cut the concrete. If you want to help let me know.

For sure! I’m only really free all day Monday & Tuesday, and Wednesday morning…

I will try to get in Tuesday before 1. That way we can id the issue, repair it and quickset over it when it is fixed

Cool dude. Even if we can’t get the cutting done I can go over what I’ve sussed out

awesome, would be good to get that sink that is in the scrap in where the bar and water cooler are presently. If I’m bringing the jack hammer I will be making holes

I noticed that someone has put some heavy duty stainless drain grate in the scrap, maybe we can cut it down and use it to cover the repair.

It may be possible to get to the broken pipe without cutting concrete, there’s sections of soil along the front of the science lab/boneyard that we may be able to dig down and then across to the affected pipe

That would be awesome if possible, have you identified where the fouling of the water commences? I filled some containers from the tap next to the boneyard and the water was Brown. If the brown water comes from the street it would be worth investing in installing some resin filters just after the main isolator valve so the whole system is protected rather than just the laser cutter room.

When are you going to be around the space, other than Tuesday? I’ll can try and drop by and go over it all…

Tuesday and through the week, not sure on exact days yet, most likely Wednesday too